Twelve states announced Monday they are suing the Biden Administration to block the vaccine mandate for health care workers, arguing the mandate is unconstitutional and violates several federal laws.

“No statute authorizes the federal Executive to mandate vaccines to increase societal immunity,” the suit reads, noting President Joe Biden has touted the vaccine as a way to increase immunity. “The Administration’s solution? Use statutory schemes never before interpreted to allow federal vaccine mandates to shoehorn the President’s goals into the fabric of American society.”

The suit argues against the mandate requiring Medicare and Medicaid health care workers to be vaccinated is unconstitutional and harms patient care as employees are forced to either take the shot or lose their job.

“The Vaccine Mandate causes grave danger to vulnerable persons whom Medicare and Medicaid were designed to protect – the poor, sick, and elderly – by forcing the termination of millions of ‘healthcare heroes’,” the suit reads.

The states’ are asking for a preliminary injunction to halt the enforcement of the mandate.

“The federal mandates are not about health – they are about forced compliance. Healthcare workers should be allowed to make their own decisions about their health – not President Biden. If his unprecedented overreach is not stopped, healthcare workers will lose their jobs threatening access to medical care that Montanans need.”

Alabama Attorney General Steve Marshall said “this is about so much more than vaccines. It’s about planting a flag to say that ‘enough is enough.’ The federal government’s power is not boundless, but if we are vigilant to fight here and now, there will be no going back.” 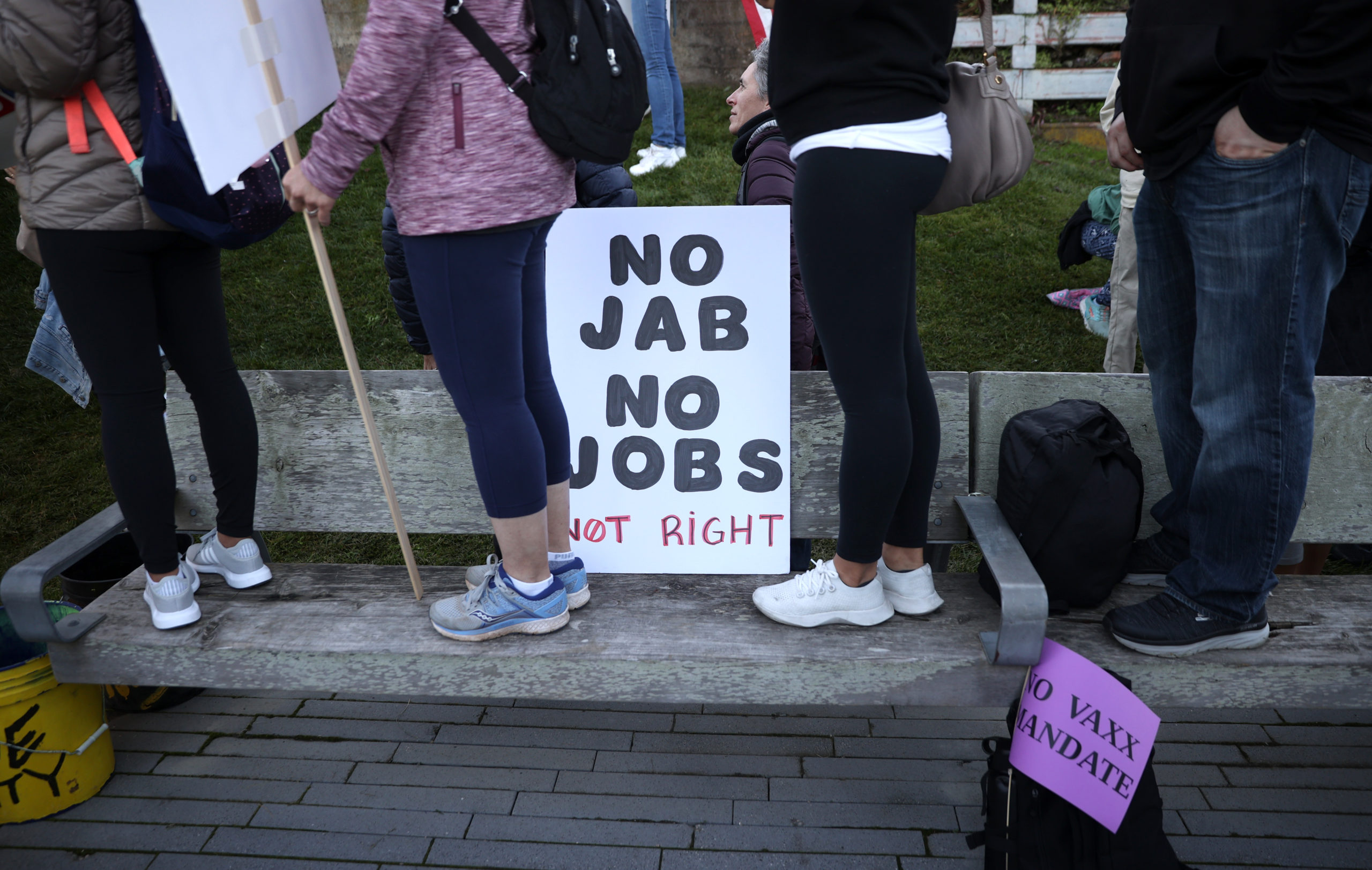 SAN FRANCISCO, CALIFORNIA – NOVEMBER 11: Protesters stand next to a sign during an anti-vaccination rally at the Golden Gate Bridge on November 11, 2021 in San Francisco, California. (Justin Sullivan/Getty Images)

Health care employees who work at facilities that accept federal funding from Medicare or Medicaid must be fully vaccinated by Jan. 4 and do not have the option to submit to regular testing rather than get vaccinated. (RELATED: Biden Administration Relying On Informants To Enforce Vaccine Mandates)

Several states, including some of the aforementioned, are enjoined in a separate suit against the vaccine mandate for federal contractors.

The U.S. Court of Appeals for the Fifth Circuit halted the administration’s rule requiring employers with more than 100 employees to mandate the vaccine or implement weekly testing, with the court ruling since petitioners believe “there are grave statutory and constitutional issues with the Mandate, the Mandate is hereby stayed pending further action by this court.”

The court then later reaffirmed their decision, ruling the mandate likely “violates the constitutional structure that safeguards our collective liberty” and that the mandate was “staggeringly overbroad.”