As the House moves toward a vote on President Joe Biden’s $1.75 trillion spending package, Democrats and Republicans are in agreement on one thing: the bill’s impact will be transformational.

Whether the transformations will be uplifting or catastrophic, however, is where the bipartisan agreement ends. While Democrats have argued that the bill will greatly improve the lives of working class Americans, help address climate change and reduce inflationary measures over the long term, Republicans have sounded the alarm over the package that they say will worsen the crisis at the southern border, massively change government’s role and bankrupt the country.

“This bill is a transformational bill,” Wisconsin Republican Rep. Glenn Grothman said on the House floor Thursday. “It’s a bill made up by people who think America’s fundamentally broken and we have to make big changes.”

Democrats, however, have rebuffed Republicans’ concerns, insisting that the bill that would remake the social safety net is fully paid for, popular and necessary.

“[It] strengthens our economy and changes the lives of millions of Americans,” Connecticut Democratic Rep. Rosa DeLauro, the chair of the House Appropriations Committee, said on the floor, touting the bill’s child tax credit and health care provisions. “We have the opportunity to build the architecture for the future for working families, and working and middle class families across this country are counting on us to build a better and stronger America.” (RELATED: House Sends First Part Of Biden’s Domestic Agenda To His Desk After 11th Hour Agreements) 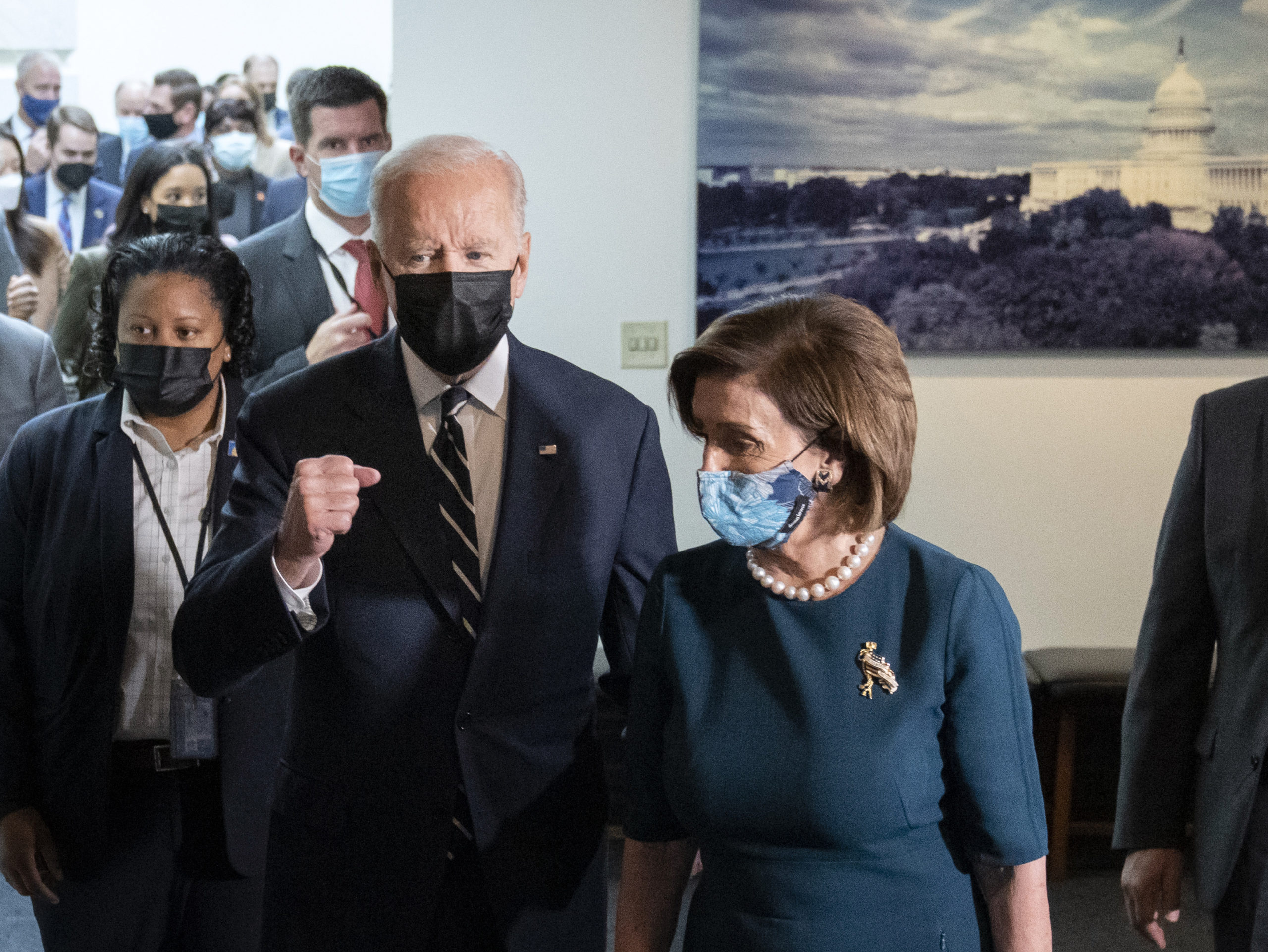 President Joe Biden and House Speaker Nancy Pelosi leave a meeting with House Democrats at the Capitol in late October. He traveled to the Hill repeatedly as Congress moved to pass the budget and bipartisan infrastructure bill. (Drew Angerer/Getty Images)

The House finished debate on the bill Thursday morning as Democrats awaited a full score from the Congressional Budget Office (CBO). The score was key to secure support from several moderate Democrats who refused to vote for the package without knowing its potential cost, and the CBO announced early Thursday afternoon that the score would come today, clearing the way for a manager’s amendment and possible vote on final passage in the coming hours.

While there is little Republicans can do to stop the bill from going to the Senate if Democrats vote unanimously in favor, some of the bill’s most transformational provisions are at risk of being omitted by Democrats themselves. West Virginia Democratic Sen. Joe Manchin has repeatedly objected to including paid family leave in the budget, likely forcing its exclusion from any House-passed bill given the Senate’s 50-50 split, and he has voiced concerns about climate change and revenue raising provisions alike.

Arizona Democratic Sen. Kyrsten Sinema has already tanked provisions to raise taxes on corporations and wealthy Americans, and she has also publicly committed to supporting the package when the Senate votes on it in coming weeks.

Regardless of what the final package looks like, Republicans have insisted that the unprecedented spending will nonetheless transform Americans’ lives for the worse.

“If you’re worried about rising prices shrinking your paychecks more and more every month,” Texas Republican Rep. Kevin Brady said on the floor Thursday, “these trillions of new government spending will only make it worse.”