President Joe Biden’s administration rejected a proposal back in October that would have provided rapid, at-home COVID tests to Americans in anticipation of a surge over the holidays.

The president announced Tuesday his administration’s plan to purchase 500 million at-home rapid COVID-19 tests that will be available for free to Americans. The announcement follows testing shortages across the country as the Omicron variant continues to spread – it also, however, follows the dismissal of a similar proposal brought to the White House months earlier by COVID-19 testing experts, according to Vanity Fair.

The testing experts first pitched the idea to Biden administration officials via a zoom call on October 22, Vanity Fair reported. The plan pushed for around 732 million tests per month and the first page included a “Testing Surge to Prevent Holiday COVID Surge” proposal.

According to Vanity Fair, the 10-page proposal essentially detailed options for preventing long lines and testing shortages over the holidays as Americans rushed to get COVID tested to ensure safe gatherings. Today, this is exactly what the U.S. is seeing – states like New York have seen hours-long lines of people waiting to get COVID-19 tests while retailers country-wide are struggling to keep tests in stock, according to a recent report by The New York Times.

The proposal also included a plan titled, “Every American Household to Receive Free Rapid Tests for the Holidays/New Year,” according to Vanity Fair. (RELATED: ‘A Matter Of When, Not If’: Fauci Says Definition Of Fully Vaccinated Will Change) 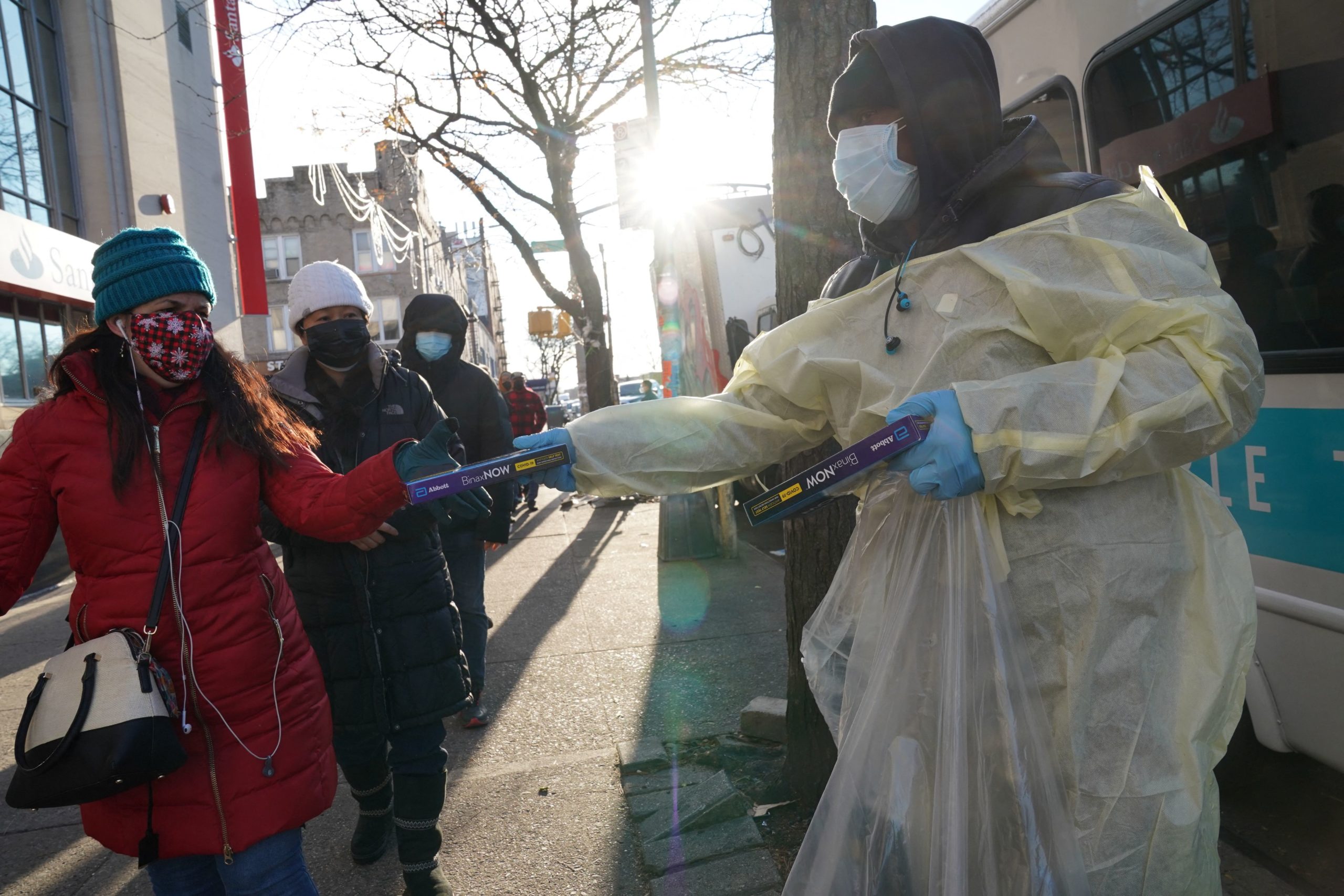 Binax Covid-19 testing kits are handed out in the Bensonhurst section of the Brooklyn borough of New York City on December 23, 2021. – The resumption of holiday travel coupled with the rapidly spreading Omicron variant left Americans scrambling to find at-home Covid tests, leading multiple major distributors to limit the number of kits per customer. Amazon, as well as vendors on its platform, began limiting the number of tests per person on December 22. National pharmaceutical chains CVS and Walgreens announced a maximum limit of six and four kits, respectively, per customer. (Photo by Bryan R. Smith / AFP) (Photo by BRYAN R. SMITH/AFP via Getty Images)

On Oct. 25, just days after the virtual meeting, the COVID-19 testing experts learned through a White House official that the plan was not going to be implemented. Instead, the administration opted to push for rapid home tests to be able to move through the Food and Drug Administration’s (FDA) approval process faster, Vanity Fair noted.

The testing experts included individuals from organizations such as the Harvard T.H. Chan School of Public Health and the Rockefeller Foundation, according to Vanity Fair. The proposal’s dismissal sparked differing opinions among the experts, with one suggesting the administration was “playing small ball” and another calling the White House “responsive” to the idea, even if it was ultimately dropped.

“We did not have capacity to manufacture over-the-counter tests at that scale,” an administration official told Vanity Fair regarding implementing the proposal back in October.

The Biden administration has long struggled with finding a solution to testing, with Biden previously announcing a plan to require health insurance to reimburse Americans for tests. White House press secretary Jen Psaki scoffed at the idea of giving free tests to Americans earlier in December.

“Should we just send one to every American?” Psaki said at a press briefing when asked about the general idea, which has been used successfully in other countries.

What’s more, although Biden has announced the plan to purchase 500 million tests that Americans can request be sent to their homes, many details remain up in the air. There is not yet a website for requesting a test and it is still unclear how many tests one household can get. What’s more, this program won’t be up and running until after the holidays.