Republican Kansas Sen. Roger Marshall responded to an article published Wednesday saying a senior Capitol Hill aide alerted the Department of Justice (DOJ) after he gave a group of truckers a tour of the Capitol building, some of whom he said are from his home state.

Politico published a report titled “GOP senator gives trucker protesters a Capitol tour,” which mentioned a senior Capitol Hill aide contacting the DOJ about Marshall inviting the group of truckers on a tour of the U.S. Capitol. Marshall pushed back on the report and the aide who called the DOJ on him, saying he was shocked by the response to him taking a group of what he called “friendly” and “hard-working” American truckers on a tour of their nation’s capitol building.

“Who would have known that taking a friendly group of hard-working American truckers, including Kansans, on a public tour of their nation’s Capitol building would cause such a stir. Let’s not forget, these are the essential workers who showed up to work every day in the earliest months of the pandemic to deliver goods and food to Americans,” Marshall said in a statement to the Daily Caller.

“Now senior congressional aides feel the need to report a Senator giving these same people a tour of the United States Capitol to the Department of Justice? Hard-working Kansans — especially those who have driven over 1,000 miles to get to D.C. — deserve access to their U.S. Capitol,” he continued. 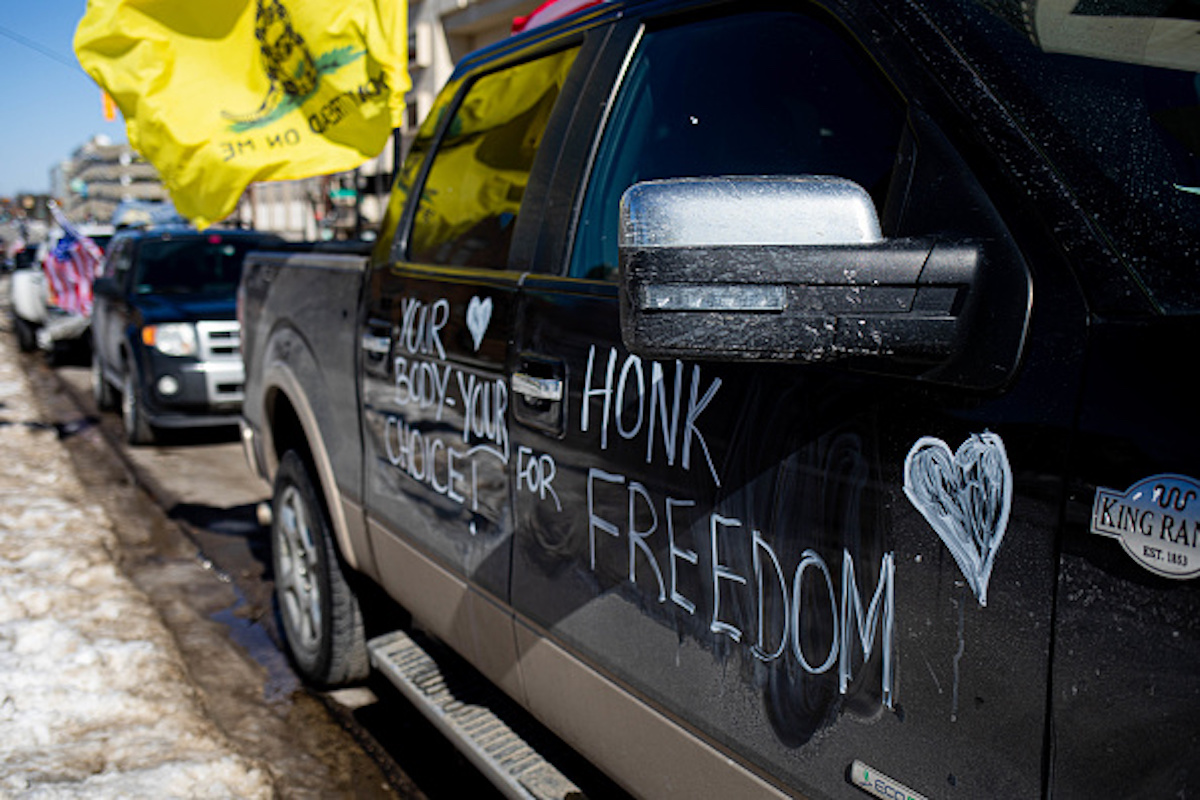 Cars line up to participate in a Freedom Convoy protesting COVID-19 restrictions and demanding election audits on February 20, 2022 in Lansing, Michigan. (Photo by Emily Elconin/Getty Images)

“You got a United States Senator taking taxpaying citizens from his state through their capitol — the capitol that their tax money paid for, that they’re supposed to be able to come to petition their member of Congress to redress their grievances. He’s taking them through the Capitol and some senior aide Democrat, what alerts the Department of Justice? This is frightening,” Jordan told the Daily Caller in a phone conversation.

“While it’s becoming the new normal for Democrats to treat working-class Americans with disdain, this story is particularly absurd. Truckers are absolutely essential to the American way of life. Maybe if Biden’s DOJ spent less time targeting parents and truckers, they’d be able to address the violent crime spike in our cities,” Bishop told the Daily Caller. (RELATED: Convoy Leader Announces They’re Staying In DC Area Until Demands Are Met)

In February, the Pentagon authorized 700 National Guardsmen to deploy to D.C., citing the trucker convoys that were reportedly on their way to D.C. to protest Biden’s COVID-19 vaccine mandates. (RELATED: Humvees Patrol US Capitol As New Fences Go Up Ahead Of Biden’s SOTU Speech)

After the Jan. 6 Capitol riot, there were National Guard troops on the ground for weeks. There was fencing and razor-wire installed around the complex after the riot, where acts of vandalism and violence postponed the Electoral College certification process and forced members of Congress to evacuate the building. A fence was then put back up for security measures.

The U.S. Capitol still remains closed to the general public.