CORRECTION: An earlier version of this story referred to Scarlett Johnson incorrectly. The piece has since been updated.

A Wisconsin school district is proposing a new sexual education curriculum that introduces third graders to gender identity and sexual orientation and asks educators of sixth graders to refer to females as “a person with a vulva,” according to public curriculum plans.

Wauwatosa School District in Wauwatosa, Wisconsin, is proposing a new sexual education curriculum called “Human Growth and Development” to the school board on Aug. 8 and will then vote to approve the curriculum on Aug. 22, according to school documents. The K-12 curriculum begins with teaching kindergarteners how to label their genitals, with gender identity and sexual orientation lessons beginning in third grade. (RELATED: ‘What Does Semen Taste Like?’: California School Uses Planned Parenthood Lesson To Teach Sexual Health)

Parents were told about the possible curriculum change through an Aug. 3 letter from the school district.

The proposed curriculum includes a lesson plan for kindergarteners featuring the children’s book “Sparkle Boy,” a story about a boy who prefers to dress like a girl and is eventually mistaken for a girl, public curriculum documents showed. The plan also includes “Not All Princesses Wear Pink,” a story about how girls don’t have to wear clothes or like activities that all girls wear to ostensibly teach kindergarteners about gender and stereotypes.

“According to district policy, the new curriculum must be available for two weeks for the community to review prior to board approval. In Wisconsin, we are a local control state. There is no mandate that they must adopt this curriculum or align with federal guidelines for sexual education, or human growth and development,” Scarlett Johnson, head of Ozaukee, Wisconsin’s Moms For Liberty chapter, told the Daily Caller News Foundation.

Students in fourth grade are introduced to the terms cisgender, transgender and non-binary, public documents showed. The fourth graders learn how to use pronouns for someone’s gender identity and are taught that someone may “question their gender.” 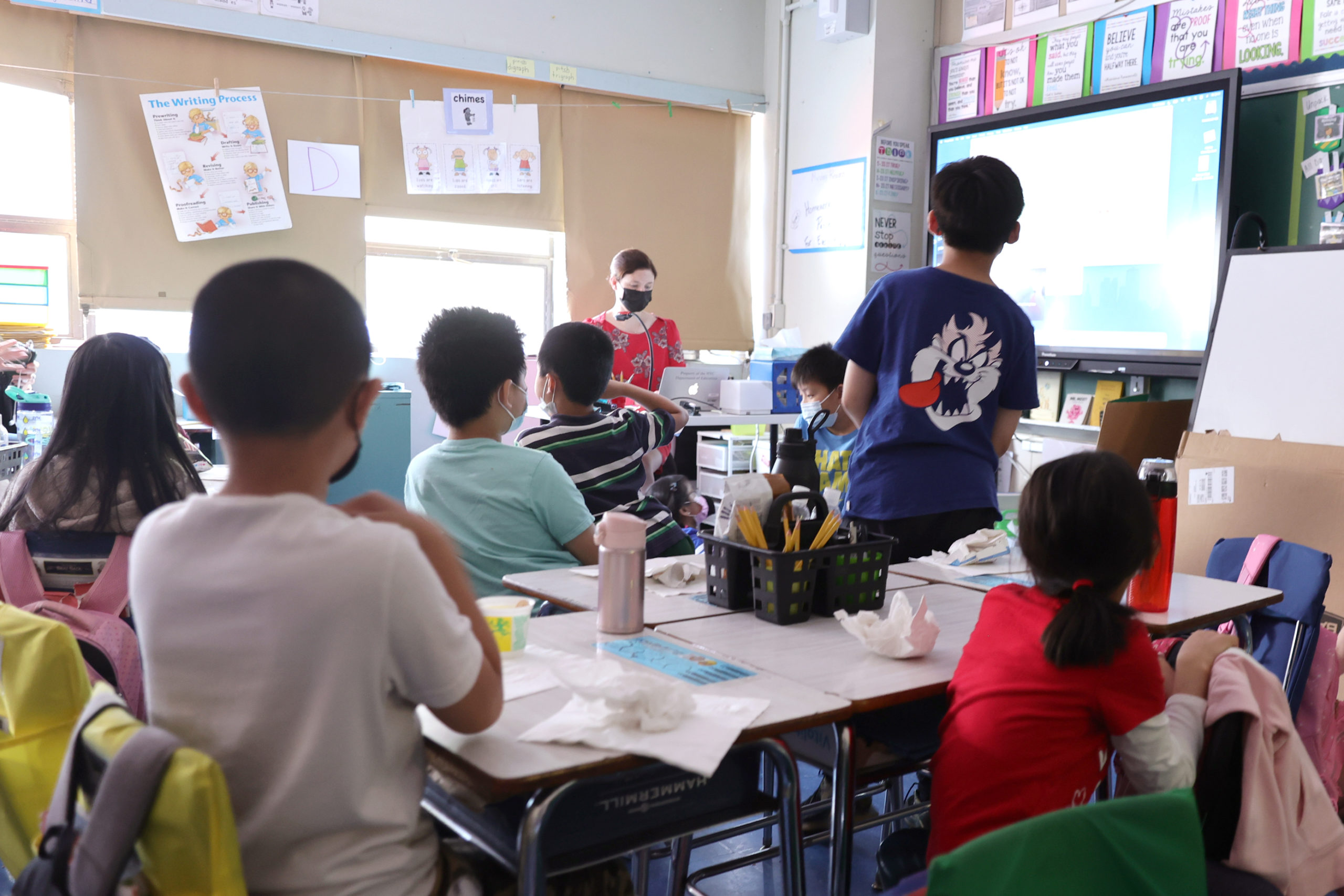 Students attend class on the second to last day of school as New York City public schools prepare to wrap up the year at Yung Wing School P.S. 124 on June 24, 2022 in New York City. Approximately 75% of NYC public schools enrolled fewer students for the 2021/2022 school year due to the pandemic. (Photo by Michael Loccisano/Getty Images)

By sixth grade the students are expected to be able to define the terms bisexual, lesbian, gay, queer, twospirit, asexual and pansexual, public curriculum documents showed. Educators are advised to refer to females as “a person with a vulva” to “avoid assuming that all of your students’ gender identities will match their sexual anatomy.”

The previous curriculum taught kindergarten students the basics of consent and did not feature instruction on gender identity, according to documents obtained by the DCNF. Students were taught about being “gay” and “sexual orientation” when in fifth grade.

“A lot of parents just don’t even understand what’s happening. They just feel like they’re in the twilight zone. Then they’re afraid to offend the gay community, because the woke fixation on drag queens performing for children and the sudden increase in gender confusion among pre-teen girls has been aligned with gays and lesbians, which I think is wrong,” Johnson told the DCNF.

Wauwatosa School District did not immediately respond to the Daily Caller News Foundation’s request for comment.