The EU’s 2015 CO2 emissions increased by 0.7 percent relative to 2014, while U.S. emissions fell to its lowest level in two decades. The EU has spent an estimated $1.2 trillion financially supporting wind, solar and bio-energy and an incalculable amount on a cap-and-trade scheme to specifically lower CO2 emissions.

TheDCNF analyzed the increased CO2 emissions data from the the European Commission through Eurostat and CO2 emissions from the Energy Information Administration (EIA) of the last full year of state-level data. The use of older U.S. data predates much of the fracking boom, meaning an updated result would likely be even more significant.

TheDCNF’s findings are displayed on the maps below. 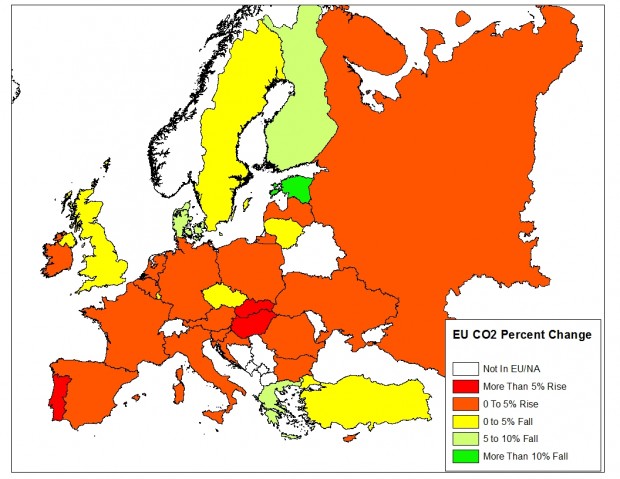 The largest CO2 percent decrease in the EU came from the tiny country of Malta, where emissions fell by about 27 percent. 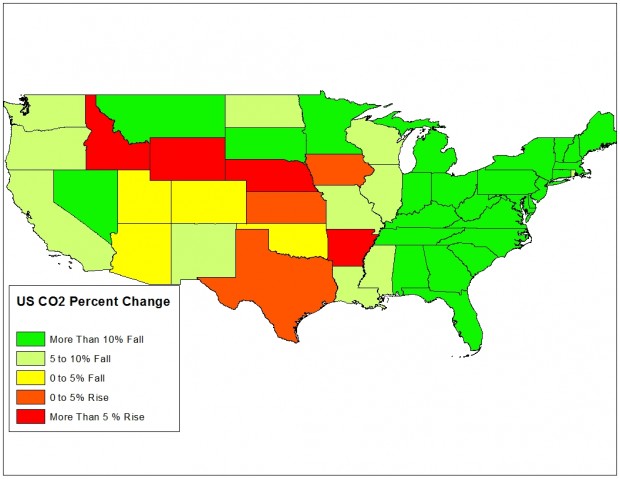 TheDCNF’s analysis found that a majority of U.S. states, especially on the East Coast, saw CO2 emissions fall by more than 10 percent. America’s overall CO2 emissions have fallen by 12 percent since their peak in 2000, according to the EIA. The U.S. has reduced greenhouse gas emissions more than any other country, a fact even The Sierra Club acknowledges.

EU emissions are increasing even though it implemented a cap-and-trade system called the European Union Emission Trading Scheme. The program directly cost the European countries $287 billion to implement in 2011 and likely caused trillions of dollars in lost economic output. Even worse, the scheme is widely acknowledge to have not worked, as CO2 emissions actually increased, according to a study by the Swiss banking firm UBS. A similar scheme planned for America would have destroyed 2.5 million jobs and lost $9.4 trillion of economic output by 2035 if implemented, according to analysis by The Heritage Foundation.

The U.S. spends far less than the EU supporting green energy, discounting the cap-and-trade schemes, but American CO2 emissions are falling thanks to the development of hydraulic fracturing, or fracking, which the EU has repeatedly slowed with regulations. The EU has spent $1.2 trillion subsidizing green energy. EU regulations, financial support for green energy and taxes cause the average European to spend 26.9 cents per kilowatt-hour on electricity, according to calculations performed earlier this month by TheDCNF. The average American only spends 10.4 cents.

TheDCNF’s analysis concurs with a report published in early May by the EIA, which found the primary reason for the decline in CO2 emissions is increased natural gas production from fracking. Fracked natural gas supplies much of the power in East Coast states, which saw CO2 emissions most rapidly fall. Previous analysis by TheDCNF found a statistically significant correlation between the dependence of a state’s economy on natural gas and large reductions in CO2 emissions.

Natural gas emits about half the CO2 of coal power and is already cheaper than coal in many locations due to fracking. The EIA estimates roughly 68 percent of the falling CO2 emissions are due to the switch from coal to natural gas.

Fracking has cut more American CO2 emissions than solar or wind power, according to a study published last November by the Manhattan Institute. The study shows solar power is responsible for a mere one percent of the decline in American CO2 emissions, while natural gas is responsible for nearly 20 percent. For every ton of CO2 cut by solar power, fracking has cut 13 tons.

The DCNF intern Jackson Richman contributed to this report.