U.S. troops are working with their Border Patrol colleagues to help secure the southern border with Mexico by installing barbed wire.

As Fox News reports, they are reinforcing the border at what officials perceive as key sections, including putting 1,000 feet of the sharp fencing across the Rio Grande. 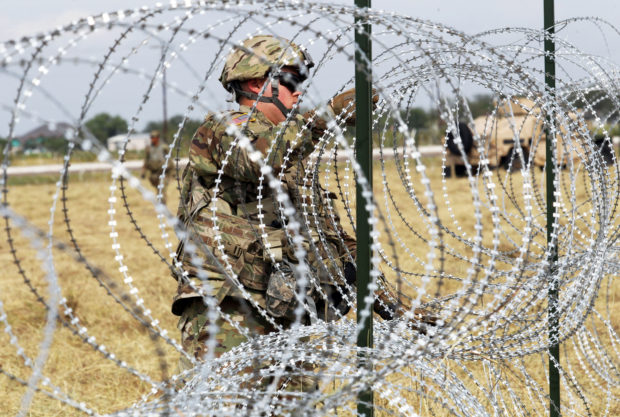 A U.S. Army soldier from Ft. Riley, Kansas, installs barbed wire fence for an encampment to be used by the military near the U.S. Mexico border in Don’t , Texas, U.S., Nov. 4, 2018. REUTERS/Del is Lopez

Other strategic locations include the Hidalgo Texas Port of Entry and the McAllen-Hidalgo International Bridge. The Border Patrol described the work as “necessary preparations,” according to Fox. (RELATED: US Border Patrol Warns Texans About Militias Stopping Migrant Caravans)

President Donald Trump has made the preparations for the arrival of the migrant caravans a top message in his recent rallies to support various Republican candidates who are in tight midterm election contests. Trump specifically referred to the new border fortifications on Saturday, saying “barbed wire, used properly, can be a beautiful sight.”

There are approximately 7,000 military personnel onsite at the Mexican border, but the president has promised to send up to 15,000 if necessary. (RELATED: Trump Pledges To Send Up To 15,000 Troops To The Southern Border To Control Wave Of Migrants)

There are reportedly four migrant caravans heading towards the U.S., numbering an estimated 12,000 people. The first two allegedly have migrants fighting with the Mexican border patrol and carrying guns and Molotov cocktails.