Islamic mullahs are reportedly going door-to-door seeking the life of the Pakistani Christian woman who was recently acquitted of a blasphemy charge by a Pakistani court.

Asia Bibi, a Roman Catholic mother of five from rural Pakistan, spent the better part of the last decade languishing in a windowless cell after she was accused in 2009 of blaspheming Mohammed. Blasphemy is a capital offense in the Islamic Republic of Pakistan.

John Pontifex, of Aid to the Church in Need UK (ACN), which has campaigned for Bibi’s freedom since 2010, said in recent statements to The Guardian:

[Bibi’s family has] told me that mullahs had been reported in their neighborhood going from house to house showing photos of family members on their phones, trying to hunt them down.

[Their faith is] sustaining them in this time of acute danger. They say that if they are not allowed to find a future outside Pakistan, the fear is that sooner or later something terrible might happen to them. 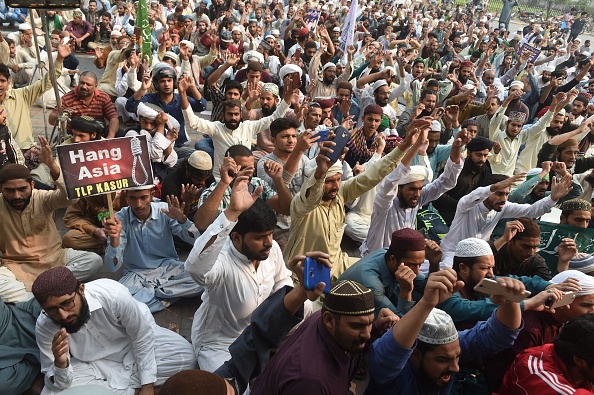 TOPSHOT – Supporters of Tehreek-e-Labaik Pakistan (TLP), a hardline religious political party chant slogans during a protest against the court decision to overturn the conviction of Christian woman Asia Bibi in Lahore on October 31, 2018. (Photo by ARIF ALI / AFP)

An illiterate field hand, Bibi had been picking berries with some Muslim women in 2009 when they told her to fetch them some water. When she returned, the women refused to drink after her, claiming that her Christian faith had made the cup “unclean.” Bibi said that they insulted her, spat in her face and demanded she convert to Islam, but she refused. (RELATED: Imprisoned British Activist Fears Muslims Will Kill Him For His Immigration Stance)

“I’m not going to convert,” Bibi replied to them. “I believe in my religion and in Jesus Christ, who died on the cross for the sins of mankind. What did your Prophet Mohammed ever do to save mankind? And why should it be me that converts instead of you?”

She was brutally beaten and then taken to prison. Over a year and a half later, she was formally charged with blasphemy and awaited a death sentence until being acquitted in October. She nevertheless remains at an undisclosed location, living in terror as protests against her have erupted across the country. Pakistani Prime Minister Imran Khan, in an effort to placate the rioters, has placed a travel ban on Bibi. 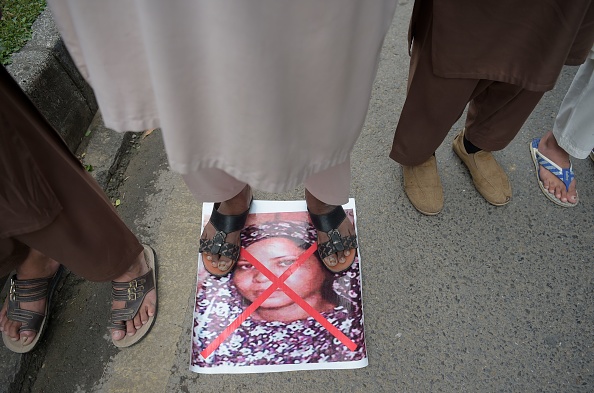 TOPSHOT – A Pakistani supporter of the Ahle Sunnat Wal Jamaat (ASWJ), a hardline religious party, stands over an image of Christian woman Asia Bibi as they march during a protest rally following the Supreme Court’s decision to acquit Bibi of blasphemy, in Islamabad on November 2, 2018. (Photo by AAMIR QURESHI / AFP)

Bibi’s husband has entreated Western leaders for his family’s asylum, including President Donald Trump. Republican Sen. Rand Paul on Monday penned an op-ed for Breitbart arguing that all foreign aid to Pakistan should be cut off until Asia Bibi is freed. (RELATED: Andrew Brunson’s US Pastor Describes What It Was Like Inside Turkish Courtroom)

Wilson Chowdhry, of the British Pakistani Christian Association, recently told The Daily Telegraph that the British government will not offer Bibi asylum because it is “concerned about potential unrest in the country, attacks on embassies and civilians.”