President Donald Trump took to Twitter to voice his displeasure with reporters who work for right-leaning Fox News Sunday and said he thought CNN and MSNBC understood his “Wall negotiations” better.

“Never thought I’d say this but I think [John Roberts] and [Gillian Turner] [Fox News] have even less understanding of the Wall negotiations than the folks at FAKE NEWS CNN [and] NBC! Look to final results! Don’t know how my poll numbers are so good, especially up 19% with Hispanics?” Trump wrote Sunday.

“After all that I have done for the Military, our great Veterans, Judges (99), Justices (2), Tax & Regulation Cuts, the Economy, Energy, Trade [and] MUCH MORE, does anybody really think I won’t build the WALL? Done more in first two years than any President! MAKE AMERICA GREAT AGAIN!” Trump added minutes later.

Roberts and Turner are correspondents for Fox News Channel. Trump attacked their “understanding” of his play for a U.S.-Mexico border wall days after he signed a three-week deal to fund the government with no money for a border wall. (RELATED: Trump Tags Wrong Person In Fox Reporter Tweet, And It Didn’t Go Unnoticed)

“So did the president here cave to Democrats?” Roberts asked Mulvaney. “I think a lot of Republicans think that he capitulated here because he really came away from 35 days of a government shutdown with nothing more than he could have had at least two weeks ago when Senator [Lindsey] Graham proposed the same thing, and maybe even back to before this whole thing started.” 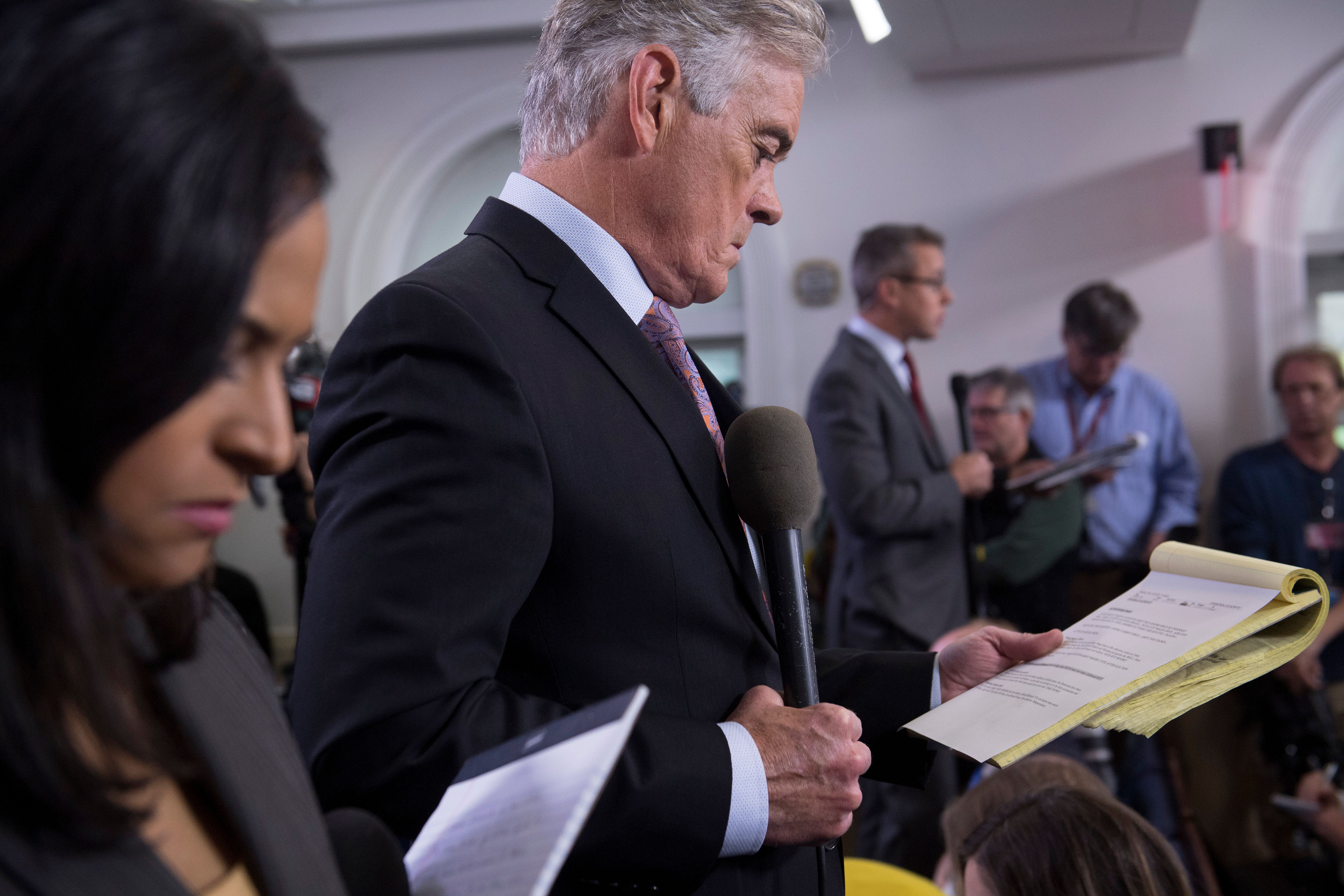 Kristen Welker of NBC News (L) and John Roberts of FOX News (R) look over their notes prior to appearing on camera as they await the daily press briefing with White House Press Secretary Sarah Huckabee Sanders at the White House in Washington, DC, December 12, 2017. (SAUL LOEB/AFP/Getty Images)

The Daily Caller News Foundation has reported previously on Trump’s substantiated claims of a 19 percent jump in support from Hispanic Americans. TheDCNF reported on Jan. 20:

The two surveys indicate a 19-point increase in support over one month’s time.

Because of the temporary funding bill Trump signed Friday evening, Republicans and Democrats will have until Feb. 15 to come to an agreement on border security funding before another partial shutdown is triggered.

“21 days goes very quickly. Negotiations with Democrats will start immediately. Will not be easy to make a deal, both parties very dug in. The case for National Security has been greatly enhanced by what has been happening at the Border [and] through dialogue. We will build the Wall!” Trump wrote on Twitter Saturday morning.

Many conservative commentators expressed their displeasure with Trump after his Friday announcement that he would agree to reopen the government without obtaining funding for a border wall first.