The Supreme Court rejected a request Monday to expedite its consideration of the Trump administration’s bid to end the Deferred Action for Childhood Arrivals (DACA) program.

DACA is an Obama-era amnesty initiative that extends temporary legal status to 700,000 non-citizens who arrived in the U.S. as children. There were no noted dissents from Monday’s decision.

As is typical of orders of this nature, the Court did not give reasons for rejecting the government’s request.

The Department of Homeland Security first took steps to terminate DACA in September 2017. Federal trial judges subsequently entered injunctions requiring that Trump maintain the program while litigation continued. Beginning in November 2018, the administration challenged three of those injunctions in the Supreme Court. The justices were poised to decide whether to hear those cases in January, but no action came. The Court’s continued inaction on those petitions is perhaps the greatest mystery of the current Supreme Court term.

The administration filed a fourth DACA petition at the high court in May, after the 4th U.S. Circuit Court of Appeals upheld one of the injunctions against DACA repeal. This time, the Department of Justice asked the Court to put the petition on the fast track with an accelerated briefing schedule. That would allow the justices to decide whether or not to take the DACA cases before they adjourn for the summer in late June.

“With yet another court of appeals to have now fully considered these issues, the government respectfully submits that further percolation is unnecessary and the time for the Court to act is now,” Solicitor General Noel Francisco told the justices in legal filings. (RELATED: Arr! Supreme Court To Hear Dispute Over Blackbeard’s Pirate Ship)

“Resolution of the pending petitions…before the summer recess is critical, if the petitions are granted, to afford the government and the multiple private and state parties involved sufficient time to coordinate on a briefing schedule and to allow appropriate time for each side to address, and for the Court to consider and resolve, the many important issues presented by these cases,” Francisco added. 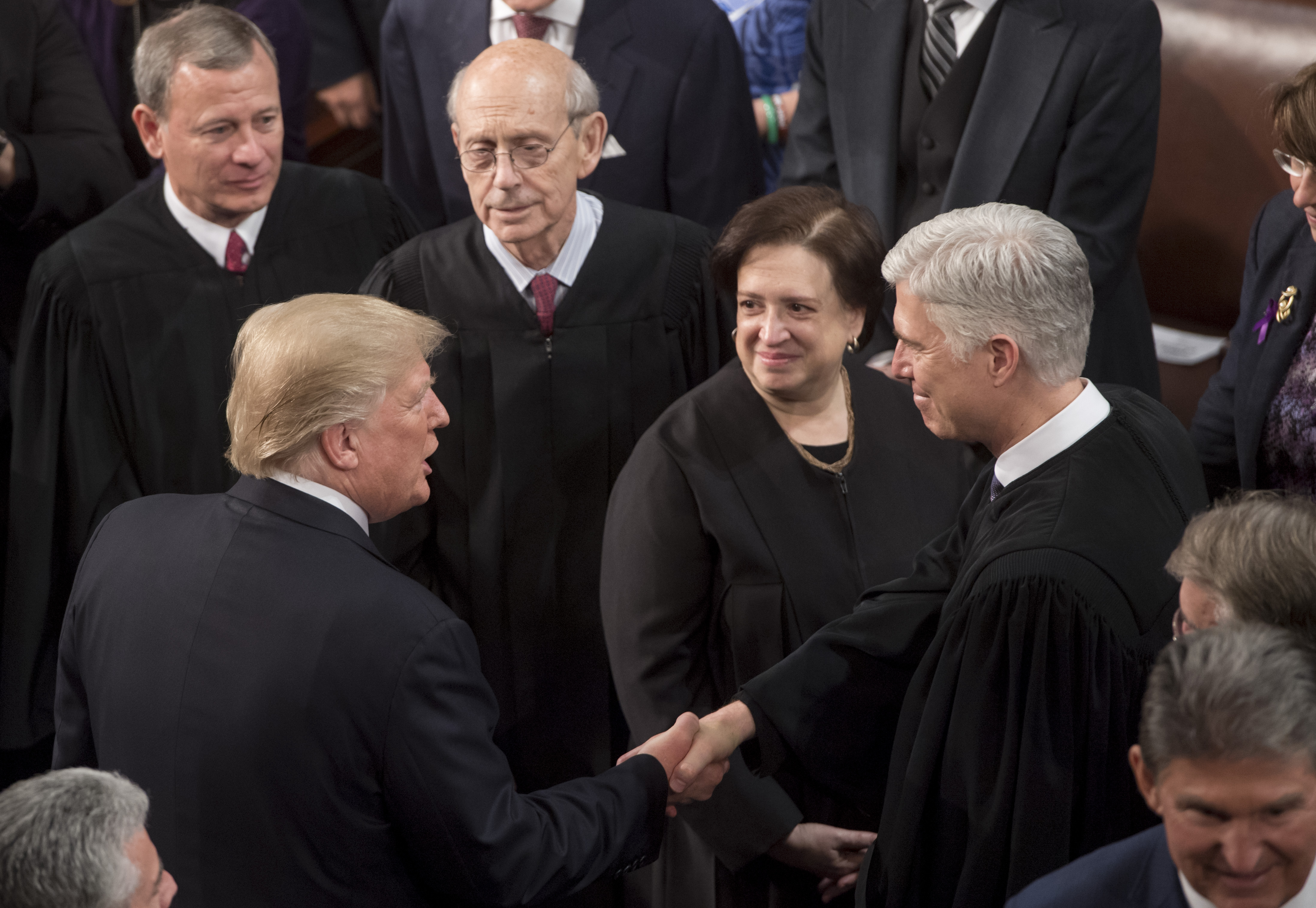 President Donald Trump shakes hands with Justice Neil Gorsuch as other members of the Supreme Court look on during the State of the Union address on January 30, 2018. (Saul Loeb/AFP/Getty Images)

“Petitioners have identified no circumstance whatsoever that would justify granting their request for an extraordinary departure from this Court’s normal procedures,” they wrote in counter-filings.

Attorney General William Barr expressed frustration with the judicial deadlock over DACA during a May speech to the American Law Institute, saying it has impeded the federal government’s response to an escalating immigration crisis.

“What have these nationwide injunctions wrought? Dreamers remain in limbo, the political process has been pre-empted, and we have had over a year of bitter political division that included a government shutdown of unprecedented length,” Barr said. “Meanwhile, the humanitarian crisis at our southern border persists, while legislative efforts remain frozen as both sides await the courts’ word on DACA and other immigration issues.”