“Trump is known for calling others disrespectful names, especially women,” Waters tweeted. “It’s your turn now. What name would you call him?”

A significant amount of users responded with answers that were likely not what Waters had in mind.

Waters’ tweet came presumably in response to Trump, who is prone to giving his political opponents nicknames, calling House Speaker Nancy Pelosi “Nervous Nancy” during a Thursday Fox News interview. Trump even has labeled Waters with her own nickname —”Crazy Maxine” — and the California congresswoman has complained about his “name-calling,” saying last March that she “has plenty [of names] for him.”

While plenty of respondents picked anti-Trump names for Waters to mull over, plenty more did the opposite of what she intended. Here’s a sampling:

President. That’s what I’d call him. What do you call someone who’s been in office for over 27 years but has gotten nothing done and has the audacity to bash our President when in 2 yrs he’s achieved lowest black unemployment EVER, restored our economy, and much much more? 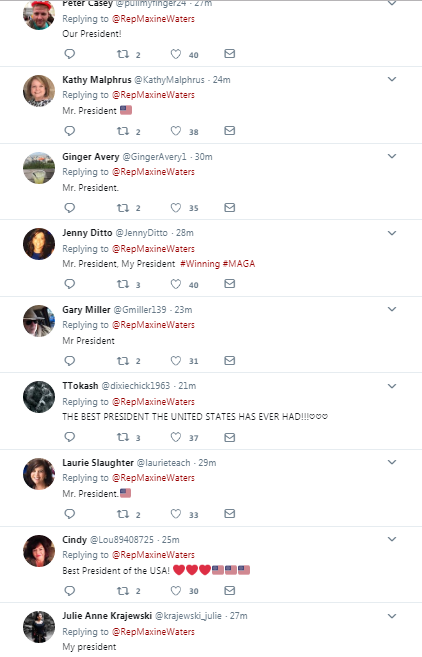 In a tweet that garnered close to 4,000 likes as of this writing, Twitter user Steph called Trump “the best [p]resident of my lifetime by a mile.”

I call him the best President of my lifetime by a mile.

Finally, Waters’ GOP opponent, Omar Navarro, responded to her tweet with a plea to help him “defeat” the California congresswoman. (RELATED: Maxine Waters Sounds Off On Impeaching … Mike Pence)

Help me defeat Maxine Waters. Please follow me at @RealOmarNavarro