Protesters in Hong Kong broke past a wall of police and into the city’s Beijing-backed legislature building, where they vandalized walls and hung the British colonial flag Monday.

Organizers say a total of about 550,000 activists protested a new extradition bill proposed by Hong Kong called the “Fugitive Offenders and Mutual Legal Assistance in Criminal Matters Legislation (Amendment) Bill 2019.” The bill would extradite those accused of crimes in Hong Kong to mainland China.

Video footage shared by multiple sources shows hundreds of people wearing hardhats rammed past police and through the glass of the main legislative building. The group stormed inside and started tearing down portraits of legislative officials, defacing Hong Kong’s official emblem, hanging a British colonial flag and spray-painting “pro-democracy slogans,” Reuters reported Monday, which marks the anniversary of Hong Kong’s return to Chinese rule in 1997. 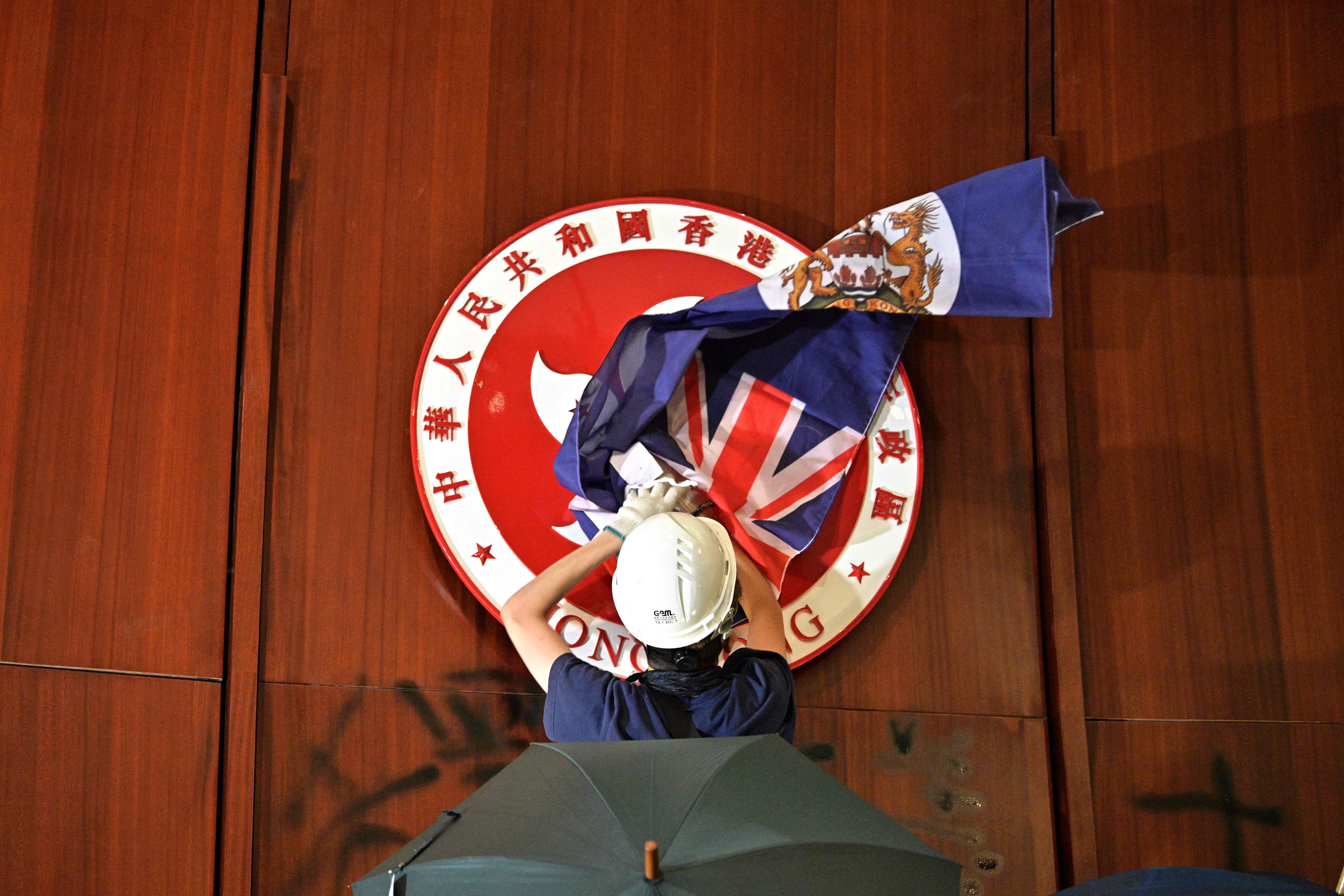 A protester attempts to cover the Hong Kong emblem with a British colonial flag after they broke into the government headquarters in Hong Kong on July 1, 2019. (Photo by Anthony WALLACE / AFP/ Getty Images)

Police retreated around 9 p.m. as they were too outnumbered to keep away the hundreds who were attempting to break into and vandalize the city’s main legislative building. Around 10:30 p.m., police announced they would clear off the area and asked protesters to leave with the threat that police would use “appropriate force” if resisted.

At about midnight, police in riot gear cracked down and began to fire teargas and beat protestors with batons, CNBC reported.

A separate peaceful march was attended by nearly 190,000 people Monday, which marks the third major protest against the extradition bill in weeks, AP notes. Organizers of a June 9 demonstration in Hong Kong estimate more than 1 million people attended, making it “one of the largest and most unified protests in more than a decade,” according to the South China Morning Post.

Protestors are concerned the bill would lead to unnecessary extraditions for political dissidents or civil-rights activists who do not support China’s communist government. They are worried the bill will slowly chip at Hong Kong and China’s “one country, two systems” law and want it rescinded to maintain Hong Kong’s autonomy.

Hong Kong Chief Executive Carrie Lam, who is being called upon to resign, said at a Monday gathering in Hong Kong’s convention center that the protests have reminded her that she needs to “grasp public sentiments accurately,” CNBC reports. (RELATED: Tech Stocks Surge After Trump Reaches Trade Deal With Xi, Huawei) 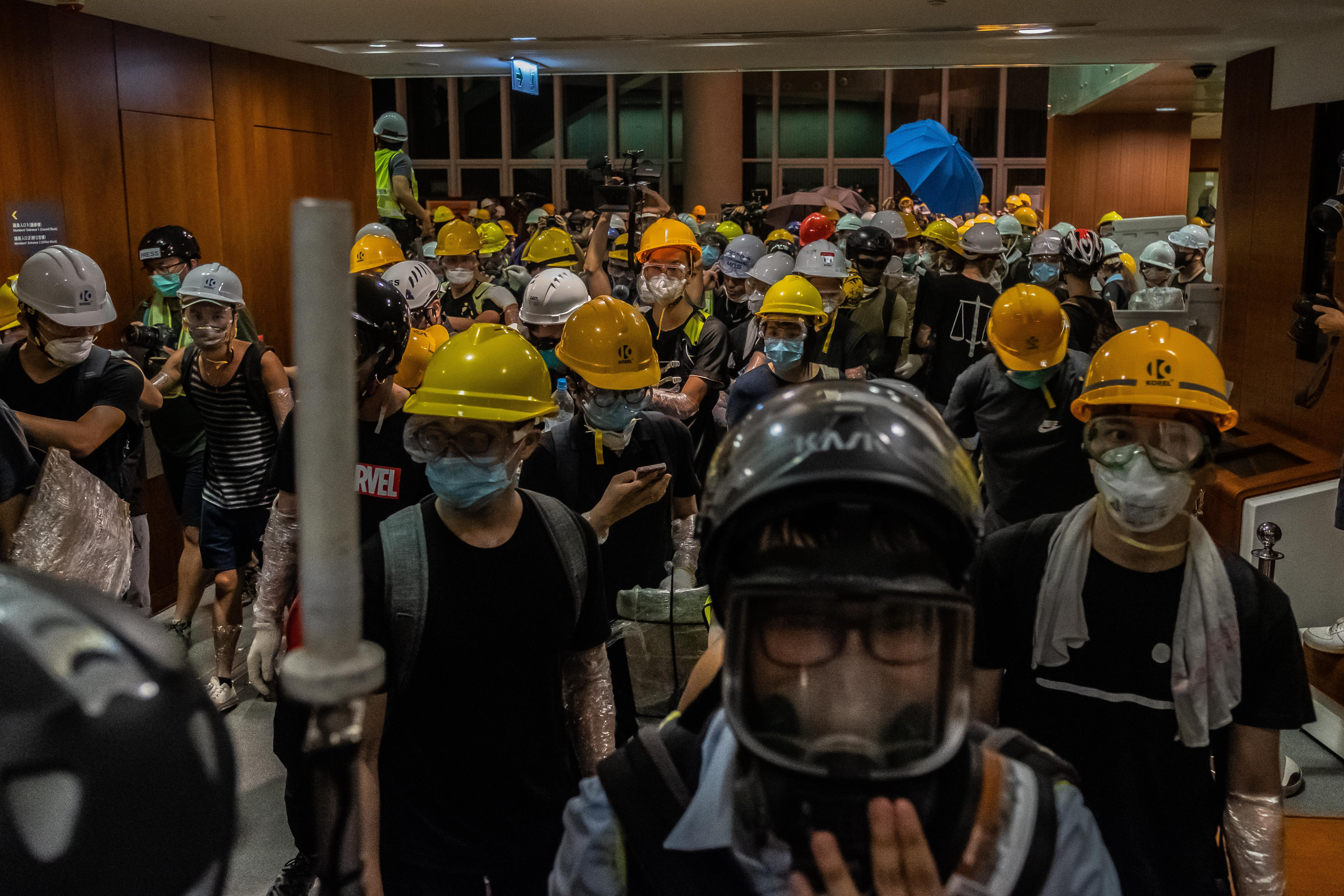 “The incident that happened in recent months has led to controversies and disputes between the public and the government,” Lam said. ” … I, as a politician, have to remind myself all the time of the need to grasp public sentiments accurately.”

“After this incident, I will learn the lesson and ensure that the government’s future work will be closer and more responsive to the aspirations, sentiments and opinions of the community,” she continued.

Lam issued a statement on June 16 saying she “apologized to the people of Hong Kong” for halting the bill — a move protesters were not satisfied with. She “admitted that the deficiencies in the Government’s work had led to substantial controversies and disputes in society, causing disappointment and grief among the people.” (RELATED: Leader Of Hong Kong Apologizes To Protesters After Halting Extradition Bill)

The bill was introduced after a Hong Kong man accused of murdering his girlfriend in Taiwan could not be sent back to Taiwan due to a lack of legal framework.

China’s state-run media has made no mention of any of the protests in recent weeks “other than to blame foreign forces for stirring up unrest,” AP notes. Chinese foreign ministry spokesman Geng Shuang told reporters Monday that “Hong Kong affairs are purely China’s internal affairs, and no foreign country has the right to intervene.”