Thousands of African migrants held up in a southern Mexican city reportedly formed an official organization, criticizing their treatment by immigration authorities and demanding passage into the United States.

The Assembly of African Migrants — a confederation of about 3,000 people from various African countries currently in Tapachula, Mexico — launched in the past week, according to La Jornada, citing assembly leaders. The group issued its first press release Thursday, describing its origins, how members have suffered since entering Mexico, and their demands.

“We, the people of African origin, forced to remain in Tapachula, suffer an unbearable humanitarian situation related to nurture, housing, health and hygiene; as well as systematic discrimination by immigration authorities,” the press release began. “Since we left our countries, for us life has been a permanent escape. We feel despair, hopelessness, fear, demoralization, loneliness and abandonment.”

The Assembly of African Migrants is made up of illegal immigrants who traveled from the Republic of the Congo, the Democratic Republic of the Congo, Angola, Cameroon, and other African countries. They said they left their countries, traveled across South and Central America, but have remained detained in Tapachula, a city on Mexico’s southern border near Guatemala. 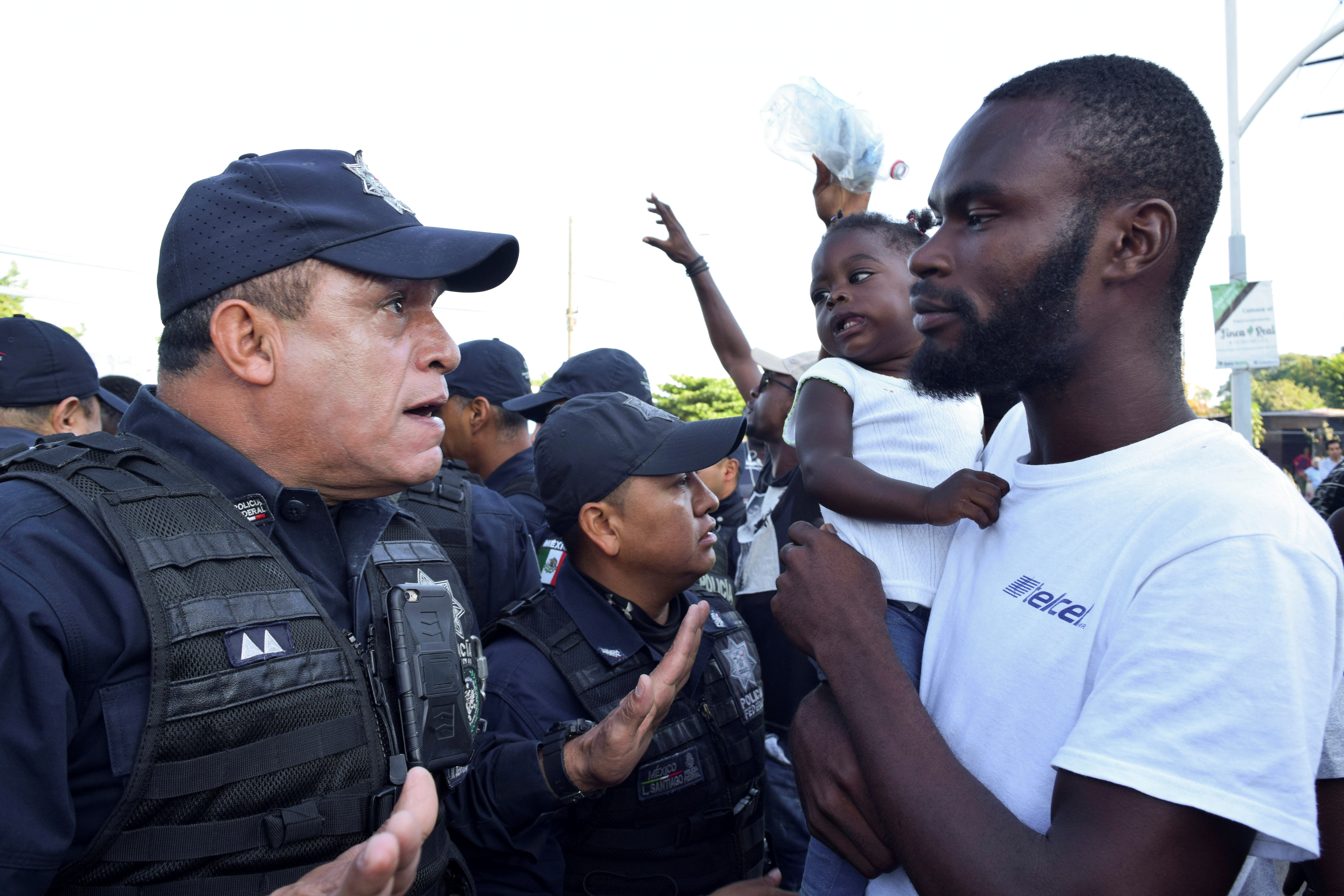 Migrants from Haiti and Africa argue with federal police officers as they protest outside the Siglo XXI immigrant detention center, demanding from Mexican migration authorities to speed up their humanitarian visas to cross the country towards the U.S., in Tapachula, Mexico August 27, 2019. REUTERS/Jose Torres

Thanks in large part to pressure from the Trump administration, the Mexican government has dramatically stepped up enforcement against illegal immigration. While the majority of illegal migrants traveling through Mexico are Central Americans, thousands of African migrants have also found themselves stuck near Tapachula’s federal immigration office.

Faced with threats of tariffs from Washington, D.C., the Mexican government has placed thousands of newly formed National Guard troops on its southern border with Guatemala, and have blocked caravans attempting to travel through its country. Mexico has also agreed to work with the Trump administration on Wait in Mexico and metering policies that keep illegal immigrants out of the U.S. (RELATED: Mexico Steps Up Illegal Immigration Enforcement After Trump’s Tariff Threat)

Besides blaming “Western powers” of fomenting the chaos that eventually forced them to flee, and accusing Mexican authorities of hostility and racism, they are demanding they be allowed to keep traveling north. Many of them are hoping to obtain transit passes that will allow them to reach the U.S. or Canada.

“Our situation is deplorable and violates our human rights,” the press release continued. “When we go out to the streets to demand solutions and rights, we suffer more repression by agents of the National Guard and Municipal Police, we are treated with violence while the competent authorities neither listen to us nor receive us.”

Clashes between illegal immigrants and Mexican authorities has reached an apex. Dramatic footage was released on Tuesday of Africans migrants fighting with law enforcement in Tapachula.

The clashes come as Mexico is witnessing a record number of migrants from Africa, complicating an already arduous repatriation process for those required to return home.

Four times as many undocumented Africans reached Mexico in 2018 compared to five years ago, according to data from the Mexican Office for Domestic Affairs. More recently, the number of illegal Africans tripled in the first four months of 2019 compared to the same period of time in 2018. Most of them are attempting to reach the U.S., fleeing the instability of their home countries.