Democratic Minnesota Rep. Ilhan Omar retweeted a post Tuesday night that claims that she has been President Donald Trump’s biggest obstacle since day one.

The fact that the first image is of @IlhanMN shows you that she’s been Trump’s biggest obstacle from day 1. She’s been living in his head rent free this whole time. #ImpeachmentNow https://t.co/DQhaMxnPDu 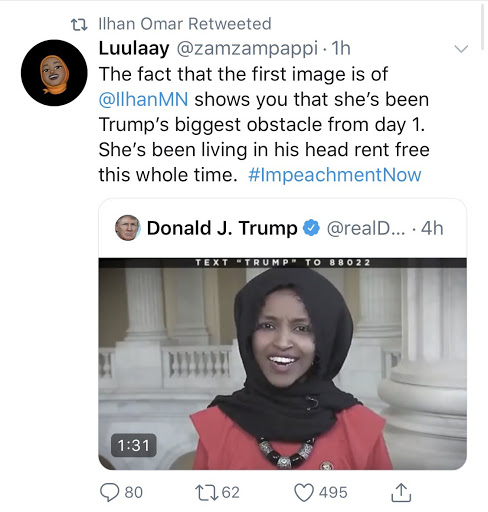 The retweeted tweet came in response to Trump tweeting out a video featuring a variety of Democrats calling to impeach the president and quotes Omar saying, “in the question of impeachment it’s about time.” (RELATED:Hillary Clinton Endorses Push To Impeach President Trump)

The video ends with the message “while the Democrats ‘sole focus’ is fighting Trump, President Trump is fighting for you.” This compilation was released amid House Speaker Nancy Pelosi saying Tuesday that she is beginning an impeachment inquiry into the president

Rep. Omar has made headlines before, including for retweeting someone who suggested Republican Kentucky Sen. Rand Paul deserved to be assaulted by his neighbor, as well as retweeting someone that said her comments on Israel were equivalent to calling Jews “hook-nosed.”

Omar raised questions last week when she deleted a tweet that revealed her father’s name, which seemed to give more credence to the idea that her ex-husband, Ahmed Nur Said Elmi, is her brother—especially when the explanation was met with several contradictions.