One of the stories that sparked interest in a whistleblower complaint against President Donald Trump was a Washington Post report Sept. 18 that he made a “promise” to a foreign leader, now known to be Ukraine’s president.

The stories helped escalate a standoff over the whistleblower complaint that has fueled Democrats’ calls for impeachment, but they appear to be inaccurate, at least based on a memo detailing the Trump-Zelensky call that the White House released Wednesday.

The memo, which is a rough transcript of the call, shows Trump did not make a promise to Zelensky, nor is there a threat to withhold aid to Ukraine, or an indication that Trump “repeatedly” pressed Zelensky to investigate Biden’s son, Hunter. (RELATED: Here’s A Transcript Of Trump’s Call With Ukraine’s President)

It is not clear how the newspapers obtained the information about the whistleblower complaint. The stories relied on two former U.S. intelligence officials and others familiar with the matter.

The whistleblower, who has not been identified, did not have direct knowledge of the phone call that undergirds the complaint, according to press reports and the Justice Department. Justice Department lawyers said in an opinion released Wednesday that the whistleblower relied on “hearsay” from other White House officials who allegedly expressed concerns about what Trump said in the call.

To be sure, there is plenty in the five-page transcript for Democrats to use to fuel their push for impeachment. The Intelligence Community Inspector General found the whistleblower complaint “credible” and “urgent,” and referred it to the Justice Department officials for possible investigation into whether Trump illegally solicited election help from a foreign country.

The Justice Department declined to open an investigation. But Democrats and liberal media pundits asserted after the White House released the phone call transcript that it shows Trump made an implicit quid pro quo by asking Zelensky for a “favor” during a discussion of U.S. military aid to Ukraine.

“I would like you to do us a favor though because our country has been through a lot and Ukraine knows a lot about it,” Trump told Zelensky after the Ukrainian mentioned he was preparing to purchase Javelin defense systems from the U.S. 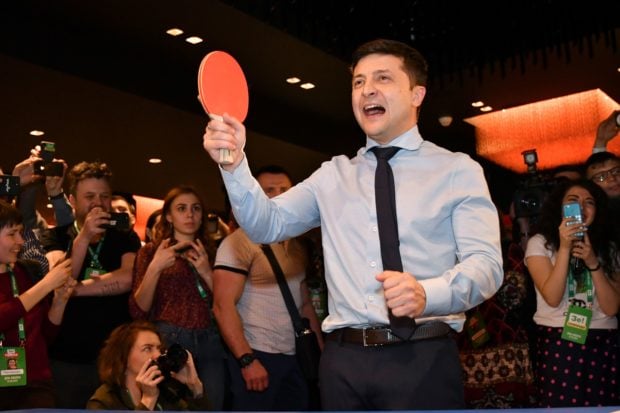 “I would like you to find out what happened with this whole situation with Ukraine, they say Crowdstrike … I guess you have one of your wealthy people … The server, they say Ukraine has it,” added Trump, referring to the cybersecurity firm that investigated Russian hacks of the DNC’s computer systems.

“Whatever you can do, it’s very important that you do it if that’s possible.”

Trump then said that he would have Attorney General William Barr contact Zelensky’s aides, telling Zelensky that “I would like you to get to the bottom of it.”

The Justice Department released a statement Wednesday saying Barr was unaware of the phone call until it was referred to the agency in the whistleblower complaint earlier in September.

Trump also emphasized U.S. support for Ukraine, and compared the assistance favorably to that provided by Germany and France, according to the call memo.

The document shows that Zelensky was who first brought up Rudy Giuliani, the Trump lawyer who has led an investigation into Joe and Hunter Biden. Trump brought up the Bidens later in the conversation, and only mentioned them during one segment of the call, at least according to the released transcript.

Trump appeared to be referring to Giuliani’s assertion that when Joe Biden was vice president, he pressured Ukraine’s president at the time, Petro Poroshenko, to fire a prosecutor who was considering an investigation into Burisma Holdings, a Ukrainian natural gas company that paid $50,000 a month to Hunter Biden as a director.

Biden bragged in January 2018 that he forced Poroshenko to fire the prosecutor in exchange for $1 billion in loan assistance from the U.S.

Giuliani and other Trump allies have said Biden’s remarks show he used his position of power to help his son avoid investigation. But there is no evidence so far that Biden was aware that Burisma Holdings was under threat of investigation.

Whether or not the Biden allegation is legitimate, WaPo and TheWSJ’s reports about what the whistleblower alleged appear inconsistent with the White House memo.

Trump’s interaction with the foreign leader included a “promise” that was regarded as so troubling that it prompted an official in the U.S. intelligence community to file a formal whistleblower complaint with the inspector general for the intelligence community, said the former officials, speaking on the condition of anonymity because they were not authorized to discuss the matter publicly.

And the lead of TheWSJ’s story reads:

President Trump in a July phone call repeatedly pressured the president of Ukraine to investigate Joe Biden’s son, according to people familiar with the matter, urging Volodymyr Zelensky about eight times to work with Rudy Giuliani on a probe that could hamper Mr. Trump’s potential 2020 opponent.

A spokesman for TheWSJ said in a statement that the paper is standing by its story.

“The call record released today is not a word-by-word transcript, and while we do not know the totality of the conversation, this record clearly shows multiple references to Mr. Giuliani and a proposed investigation, which supports our earlier reporting,” Steve Severinghaus told the Daily Caller News Foundation.

Greg Miller, the lead reporter on the Post story, did not immediately respond to a request for comment.