Massachusetts Sen. Elizabeth Warren has repeatedly claimed on the presidential campaign trail that she was pushed out of her job as a special needs teacher after one year because she was “visibly pregnant” — but she told a different story in 2007.

The Democratic senator today portrays herself as a victim of discrimination; however, in 2007 she linked her departure to lacking proper credentials for a permanent teaching position.

Warren said during a September presidential debate that she “made it as a special needs teacher. … But at the end of that first year, I was visibly pregnant. And back in the day, that meant that the principal said to me — wished me luck and hired someone else for the job.” 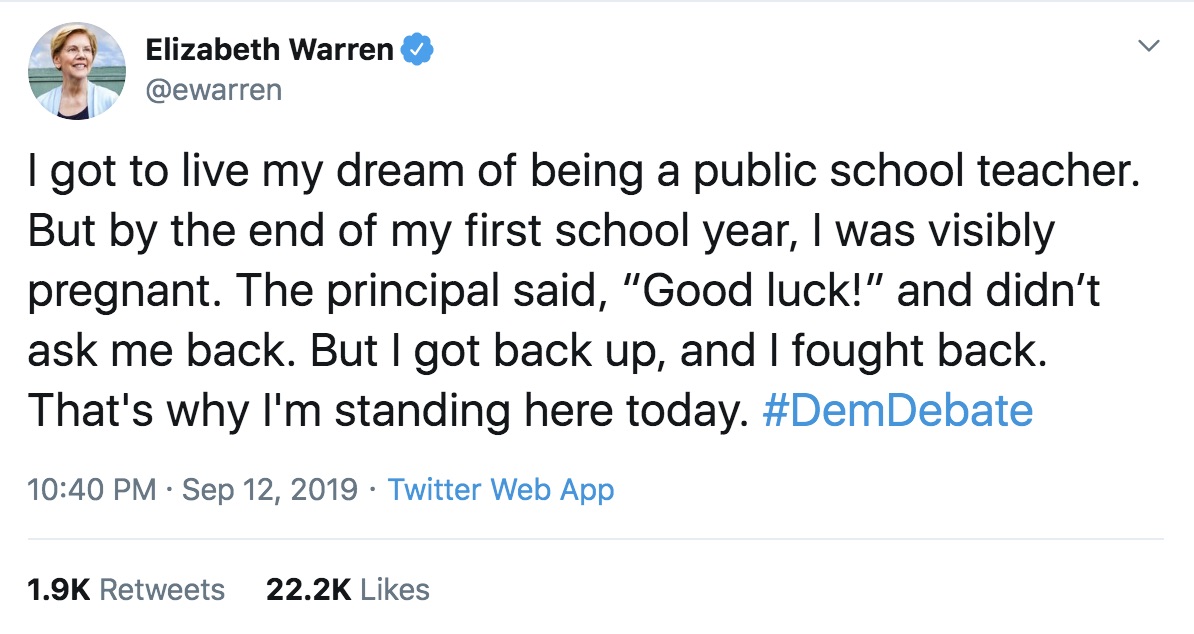 She similarly said at a campaign rally in May that she would “probably” still be teaching today, “but back in the day, before unions, the principal, by the time we got to the end of the first year, I was visibly pregnant. And the principal did what principals did in those days: They wished you luck, showed you the door and hired someone else for the job.”

Warren gave a different explanation for why she lasted one year as a special needs teacher in a 2007 interview at the University of California at Berkeley.

“I did that for a year, and then that summer I didn’t have the education courses, so I was on an ‘emergency certificate,’ it was called. I went back to graduate school and took a couple of courses in education and said, ‘I don’t think this is going to work out for me,'” she recounted at the time.

“I was pregnant with my first baby, so I had a baby and stayed home for a couple of years, and I was really casting about, thinking, ‘What am I going to do?’ My husband’s view of it was, ‘Stay home. We have children. We’ll have more children. You’ll love this.’ And I was very restless about it,” she said.

Warren’s campaign did not respond to the Daily Caller News Foundation’s request for comment by press time.

Warren has already faced scrutiny for laying claim to Native American heritage for years. For example, Warren listed herself as “American Indian” while applying for a legal license in 1986. (RELATED: Elizabeth Warren Compares Scrutiny Of Native American Heritage Claim To Obama Birtherism)