“It’s an institution — in more ways than one.”

MOOD: “My boss just called me because she was worried that using the ok sign in any context is a white supremacist thing now, even at work i can not escape this garbage world.” — Sophie Weiner, former night editor at Splinter who is based in Melbourne.

“I just got sexually objectified walking to work. A construction worker whistled at me and said ‘Looookiinnng Gooood Daveeeey!’ as I walked past. It made me feel great tbh.” — Dave Portnoy, EIC, Barstool Sports.

The View explodes with this White House power couple

It was the best of times… 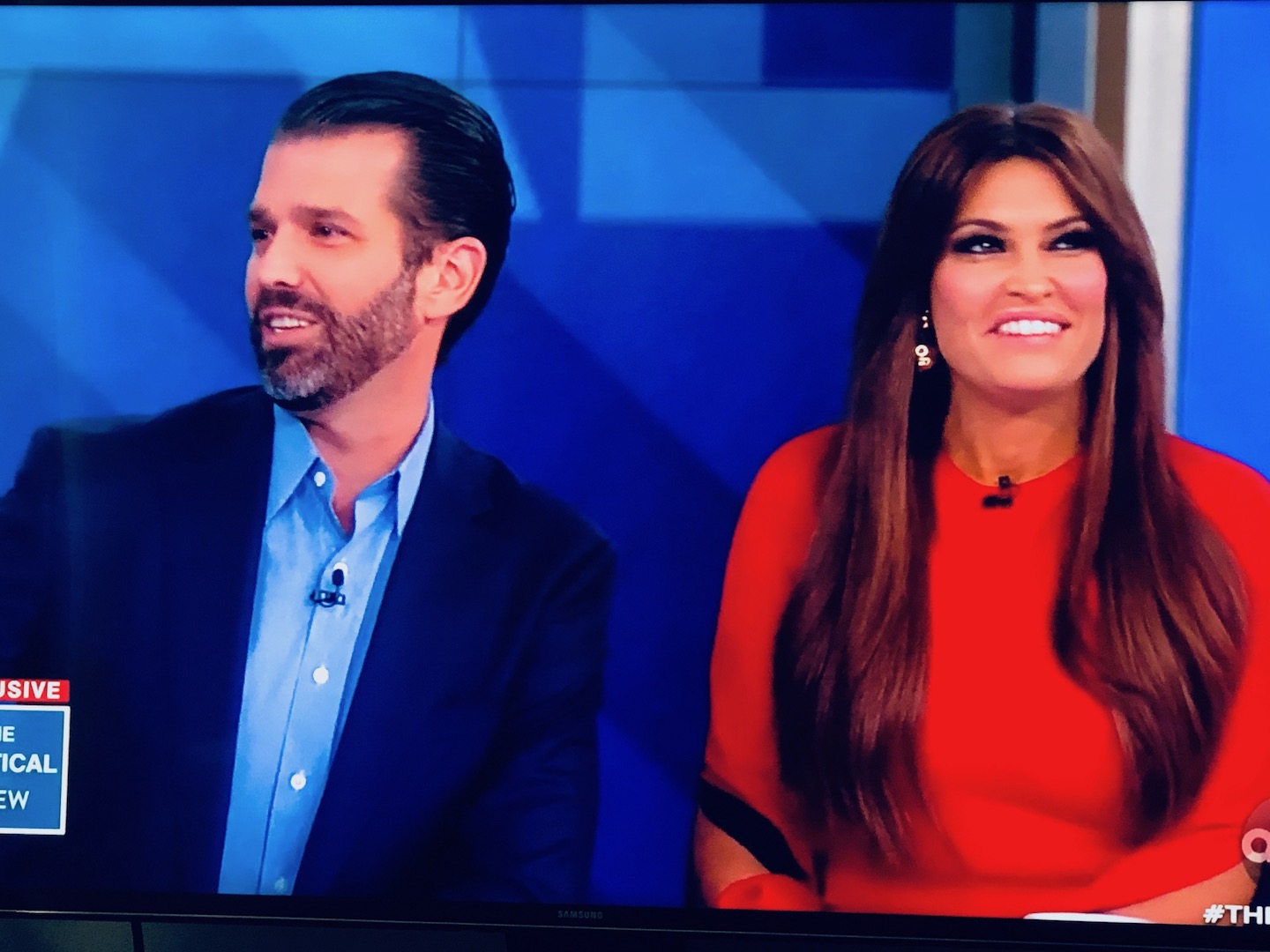 It was the worst of times… 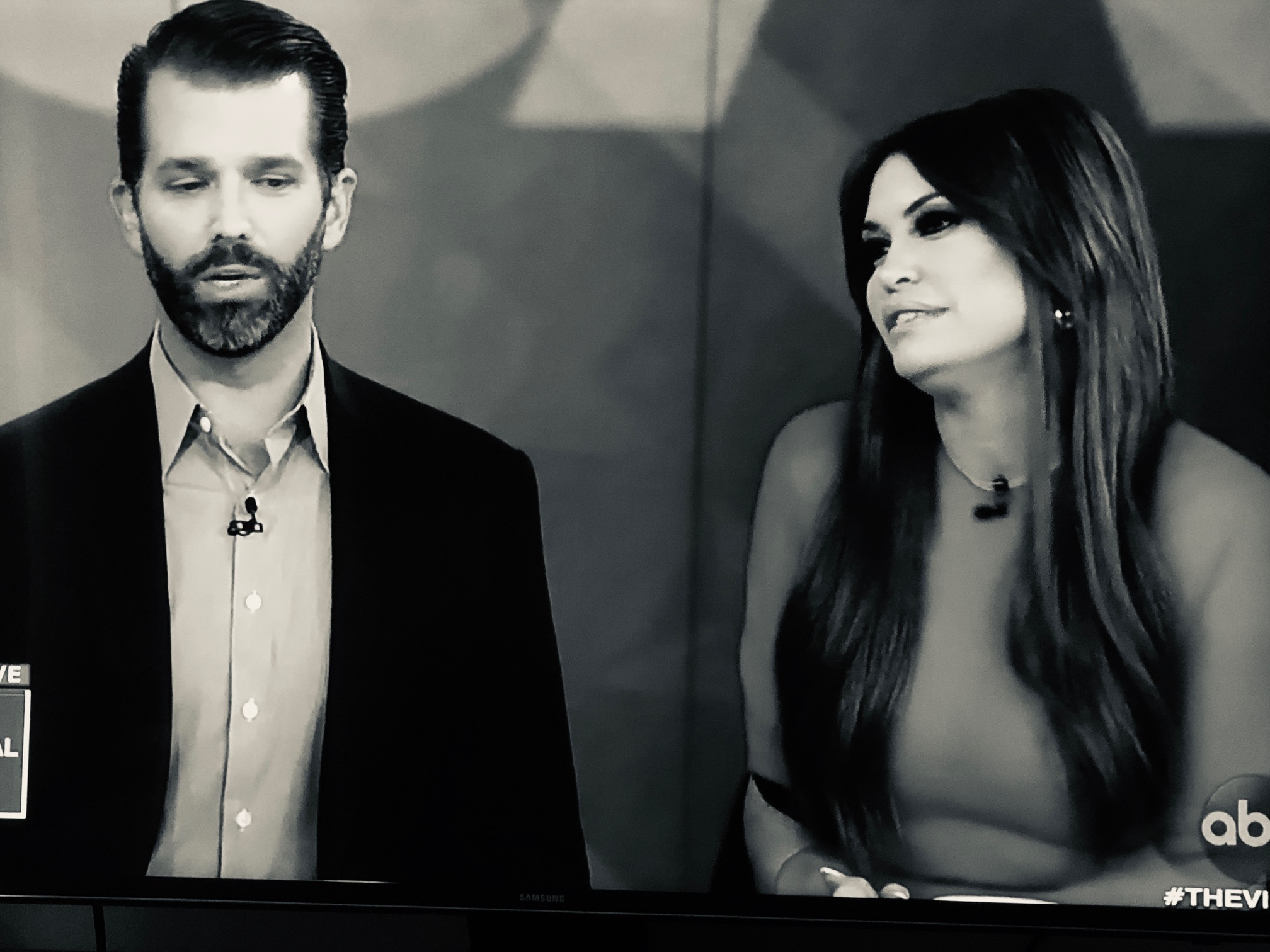 On Wednesday, Donald Trump Jr. and girlfriend Kimberly Giulfoyle entered the lion’s den of ABC’s The View. You will believe what happened next. (RELATED: Want To Go Hunting With Don Jr.?)

“.@DonaldJTrumpJr is correct: Pres. Zelensky also said there was no quid pro quo during July 25th call.” — Jason Miller, former comms adviser, President Trump. Miller is the baby daddy of former Trump campaign aide A.J. Delgado‘s child. He fathered a child with Delgado during the Trump Campaign, in a relationship that Miller began when his wife was six months pregnant, on the heels of his affair, according to Miller, with Ted Cruz‘s then-campaign aide Catherine Frazier.

Note to readers: The above has been changed to reflect the truth of the situation according to a deposition in the Gizmodo case. Read more here.

DJTJ has a new book out called: Triggered: How The Left Thrives On Hate And Wants To Silence Us.

Co-host Abby Huntsman, after butchering Don Jr. for helping to out the whistleblower, eventually threw him a softball and asked, “When are you two tying the knot?”

In 2018, DJTJ split from his wife, Vanessa, of 14 years. She filed for divorce in March, 2018. The couple has five children. They got married at Mar-a-Lago. (RELATED: Don Jr. Reminds Joy Behar About That Time She Wore Blackface)

P.S. Head host Whoopi Goldberg exclaimed that Behar never wore blackface. She did once dress up as a “beautiful African woman.”

Gaetz loves to jump into the fray. He recently went to war with Ellen DeGeneres’s executive producer.

“I go through life every day, encountering dozens of people that I know and don’t know, and everything is really pretty good most days. I get on Twitter for 5 minutes and I’m ready to curse out six different people I’ll never meet. Anyway, social media is awesome.” — Andy Lassner, executive producer, haunted house aficionado, The Ellen Show.

TPM‘s Josh Marshall: “I take some real solace from the fact that John Solomon will now basically always be known as a hack journalist who made himself the knowing conduit of foreign crooks trying to feed phony information into the United States. …Because anyone who gets into journalism really your deepest wish and ambition is to be able to say, ‘I managed to fool a lot of people.'”

“Have received many requests for signed copies of my book now that it has become the roadmap into the new investigations. So I have made them available! Message me directly to learn how to get one. Thanks for your support!” — George Papadopoulos, former Donald Trump campaign aide who admitted to lying to the FBI. He spent 12 days in prison. Now, remarkably, he may run for ex-Rep. Katie Hill’s (D-Calif.) seat. (Mrs. Papadopoulos Poses In Skimpy Suits At Trump Hotel)

Ashley Feinberg remarked, “We really don’t talk enough about how fucked up Sean Hannity’s part is.”

it clearly doesn’t part there naturally, yet every day he somehow finds this completely arbitrary spot on his head and creates an open lane of *at least* half an inch pic.twitter.com/NdCSE4YZW7

Hannity gives as good as he gets. In 2017, he attacked NBC’s Chuck Todd for being, ahem, full of himself.

“Imagine being a writer in a world where there was no Facebook, Twitter, Instagram, e-mail, iPhone notifications, calendar invites, Slack messages, app updates, or texts. Imagine just writing without any of those things breaking your concentration every 30 seconds. My god.” — Frank Pallotta, CNN media reporter.

On the Trump beat…

“For the first time in a long, long time, @realDonaldTrump did not come over to the cameras at his departure for Louisiana, nor did he talk to the pool under the wing of AF-1.” — John Roberts, chief White House correspondent, Fox News.

“My last 24 hours: – forgot my belt – neglected to tell my wife about the movers – left the chicken parm in the sink. #winning.” — Noah Schactman. “I should note that I am currently a vegetarian, which makes the chicken parm thing particularly inexplicable.”

Glenn Greenwald of The Intercept gets slapped on live TV. Here.

Tony Scaramucci knows Chinese proverbs? “The best time to plant a tree was 20 years ago. The second best time is now.” – Chinese Proverb. I, along with many of my fellow Americans, made a mistake in not abandoning @realDonaldTrump sooner. But today is the next best day to leave the cult. Let’s fix this together.”

“Overheard a woman on the Metro saying she was going to buy her father Michelle Obama‘s book for Christmas to make him a less terrible person. I’m sure that’ll go over well.” — Ashley Rae Goldenberg, investigative reporter, Capital Research Center.

Commenter: “You’re having a cringey day.”

And a question: “Serious question— did you fall down last night and hit your head? What is with you?”