The email’s subject line is a bit of a troll — the email links to a survey, available only for 48 hours, asking recipients how likely they are to vote in the 2020 election, their feelings on foreign policy issues, their gender, and their email and zip code.

In the body of the email, Bolton PAC warns of, “Radicalized Democrats normalizing socialism, Medicare-for-all, anti-Israel presidential candidates, and open-borders.”

Bolton makes a personal plea, writing, “I believe that if the country isn’t safe, everything else is secondary. That’s why I’m committed to restoring policies that promote a strong America.”

“It’s my sincere hope that you will once again stand with me as I fight to make national security a top priority.”

In the linked survey, Bolton asks voters their feelings on various issues. 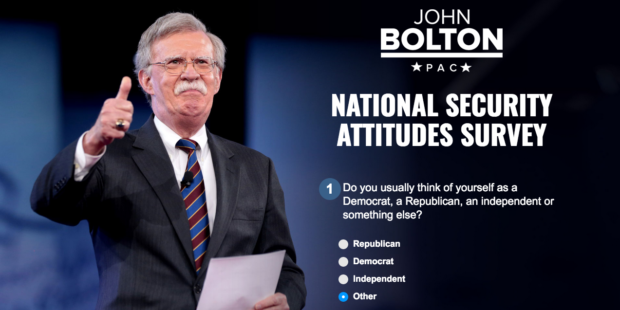 Bolton has long been an important figure in Washington advocating for strong national security positions and is a former ambassador to the United Nations. He was named as national security adviser by President Donald Trump in spring 2018, and he was fired this September. (RELATED: Trump Reveals His Top Five Picks To Replace John Bolton As National Security Adviser)

He is reportedly working on a book about the Trump administration.

Prior to serving in the Trump White House, he teased his own presidential runs in both the 2012 and 2016 elections but didn’t run either time.

The Daily Caller reached out to John Bolton PAC on Friday to ask about the email survey and Bolton’s plans.

In a statement, John Bolton PAC director Sarah Tinsley told the Caller that Bolton had no “intention” of running for president in 2020.

“He is committed to supporting congressional candidates who make strong national security policies a priority.”