Reuters changed an article about the Hong Kong protests Monday, first highlighting allegations that police were threatening protesters with live bullets and later omitting any mention of that news.

The original article was headlined “Hong Kong police threaten to use live bullets as standoff with protesters escalates,” according to an archived version. Published Nov. 17, the article described the ongoing and escalating violence of the months of Hong Kong protests, noting in the first paragraph that police were escalating threats against rioters.

“Hong Kong police threatened on Monday to fire live bullets if ‘rioters’ did not stop using lethal weapons in the latest flare up in anti-government protests that have convulsed the Chinese-ruled city for five months,” the original article begins.

The article was updated Monday and now reads like a different post, with no paragraph the same as the original. The headline is now “At Hong Kong university, a daring escape but fears of bloodshed.” The updated version omits any mention of Hong Kong police threatening to use live bullets on protesters.

Now highlighted are the violent protesters who hurled “petrol bombs” in an effort to get into the campus. It also mentions “a standoff blocking a vital tunnel link.” (RELATED: Hong Kong Protestors Wave American Flags, Voice Support For Trump)

“Dozens of Hong Kong protesters staged a dramatic escape from a university campus sealed off by police on Monday by shimmying down plastic hosing from a bridge and fleeing on waiting motorbikes as the police fired projectiles,” the first paragraph now reads. 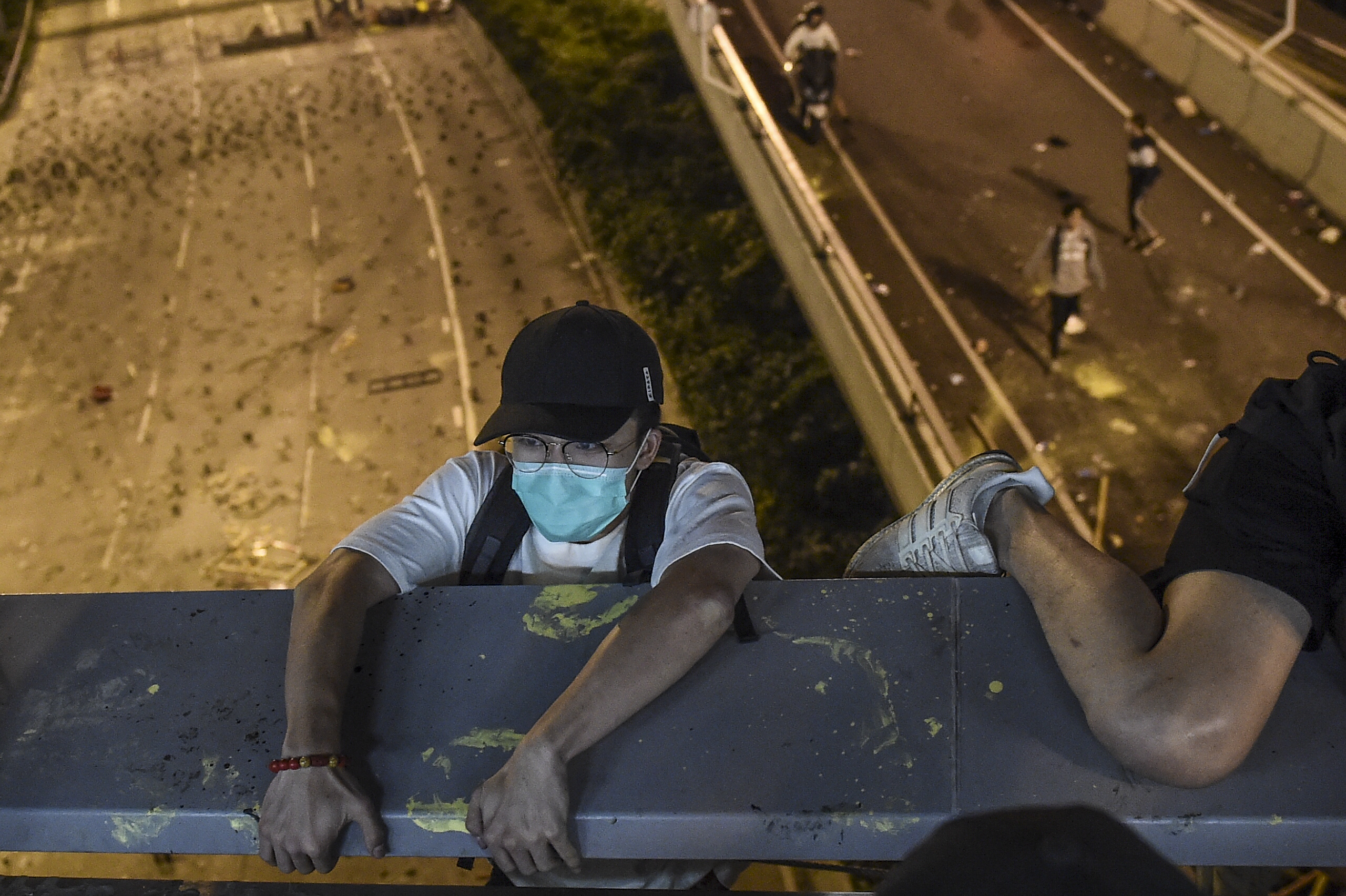 A protester lowers himself down from a bridge to a highway, to escape from Hong Kong Polytechnic University campus and from police, in Hung Hom district in Hong Kong on November 18, 2019. (YE AUNG THU/AFP via Getty Images)

The article’s URL appears to be the only thing that remained the same.

Heather Carpenter, senior director of communications for Reuters, told the Daily Caller News Foundation that the post was being “continuously updated” as the “events in Hong Kong unfolded.”

“This story was continuously updated with the latest news as events in Hong Kong unfolded,” Carpenter said in a statement to the DCNF. “Earlier versions of the story reported that the police made threats to use live bullets and later that police said they had fired live rounds but there were no injuries. As the story progressed with news of the escape, the focus of our story shifted to the most current and relevant reporting on the ground. These earlier details remain in a separate sidebar which includes highlights of the unfolding story.”

The “separate sidebar” is a completely different article that makes only one mention of “live bullets,” which was the main focus of the original article.

The DCNF also asked if it is standard procedure during a breaking news post for Reuters to forego a sentence letting readers know that the page would be updated. Carpenter referred the DCNF to the top of the page, where Reuters has an “updated” line. This line does not tell readers if the post is breaking and plans on being updated.

“The latest update time is listed at the top of the page, as per normal procedure,” Carpenter said.

The original article highlighted protesters outfitting themselves with protective gear because of tear gas and water cannons that contained an irritant. It described Chinese soldiers dressed in riot gear and noted that police admitted to firing a bullet Sunday.

In Monday’s statement, police warned people who they described as rioters to stop using lethal weapons to attack officers and to halt other acts of violence, saying office would respond with force and possibly live bullets if necessary.

Police have used live rounds in a few isolated incidents in the past.

The updated article mentions police shooting a protester earlier in November, but does not include that Hong Kong police admitted to firing a bullet more recently. It also includes news that police allowed ” two prominent figures” onto the Hong Kong Polytechnic University campus “to mediate” the ongoing situation.

Reuters continues on to describe protesters, some of whom were later arrested, briefly escaping by lowering themselves from a bridge onto the backs of waiting motorcycles. The article notes that “police fired tear gas and water cannon to push” protesters back, and doesn’t talk about the threat of live bullets, which was scattered throughout the original article.

‘The situation is getting more and more dangerous,’ Jasper Tsang, a pro-Beijing politician who is the former head of Hong Kong’s Legislative Council, told Reuters soon after he arrived at the campus.

As he spoke, big explosions were heard and flames flared up at a distant part of the campus. In streets nearby, protesters rained down petrol bombs, burning parked cars and the front of a Standard Chartered Bank branch.

The ongoing protests in Hong Kong were sparked by a since-withdrawn extradition bill. This bill would have sent residents of Hong Kong convicted of crimes to China for trial. Protesters have more demands and have continued their anti-government demonstrations.

Reuters repeatedly refused to answer questions on why information on live bullets was excluded from the current post.