Reade discussed Milano during an interview with Fox News where she noted that Milano “knows nothing” about Reade’s story. Milano has defended Biden from Reade’s allegations and said that she supported the #MeToo movement in order to shift cultural attitudes towards believing women, but that she did not mean to rob men of their right to due process.

But Reade says Milano “really doesn’t know anything about what happened to me,” and said it is “odd” Milano would say such things before speaking to Reade herself. (RELATED: ‘I Want The Same Equal Treatment’: Biden Accuser Tara Reade Tears Into Media, Women’s Groups, Democratic Politicians)

“I think we need to compare how she responded to Brett Kavanaugh… quite different than the talking points she [used] regarding Joe Biden,” Reade told Fox News. “She never reached out to me. I don’t really want to amplify her voice because I feel like she hijacked my narrative for a while and framed it about herself… she knows nothing about it.”

Reade worked as a Senate staffer for Biden in 1993 and has accused the then-senator of kissing her, touching her, and penetrating her with his fingers without her consent. Biden’s 2020 presidential campaign, which has not responded to many requests for comment from the DCNF, has denied the assault and said it “absolutely did not happen.” 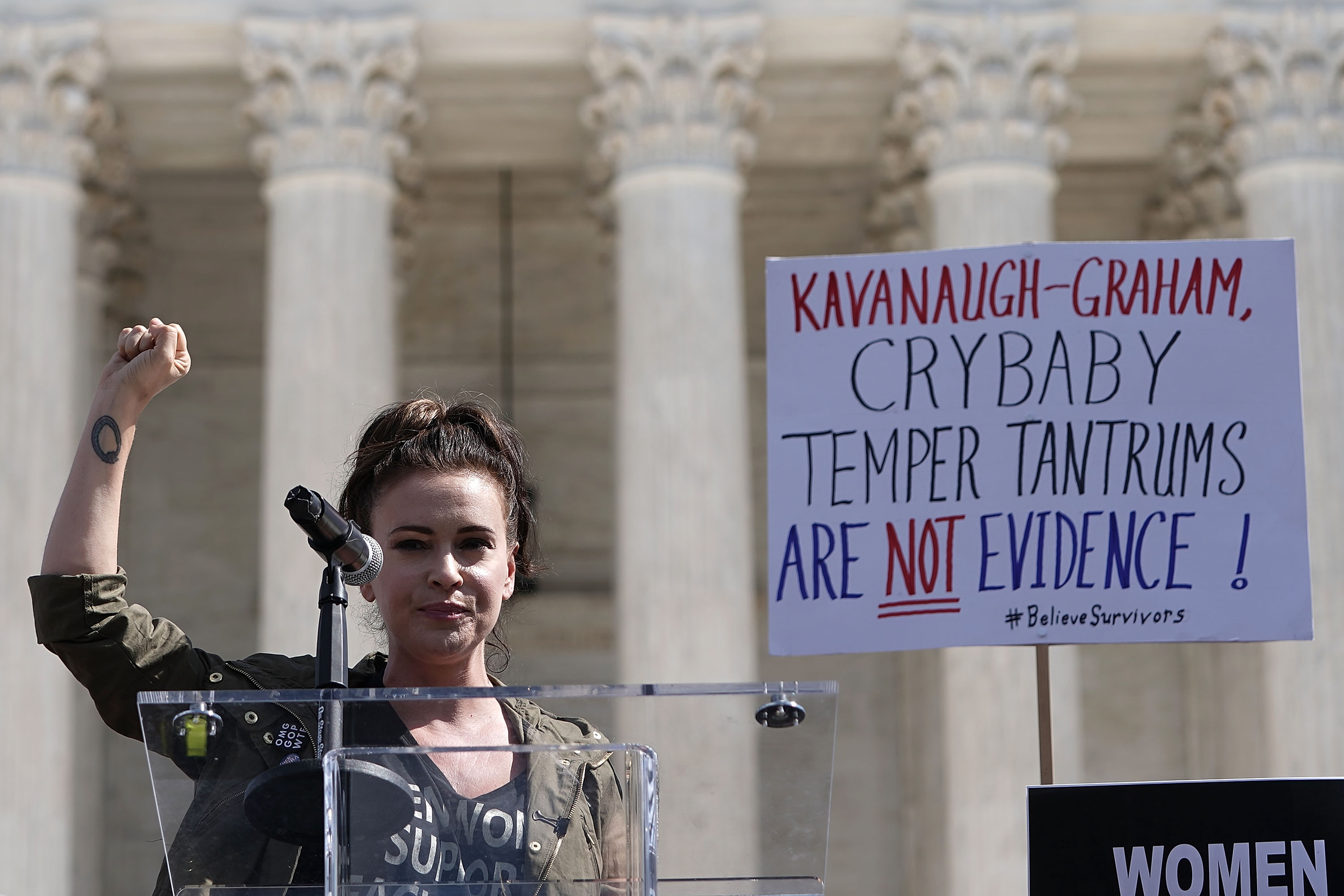 Alyssa Milano speaks during an anti-Kavanaugh rally in front of the U.S. Supreme Court on September 28, 2018 (Alex Wong/Getty Images)

Reade added that Milano “only knows Joe Biden, so she doesn’t know me and has never talked to me. So, how could she possibly talk about the case?” Reade asked. “She went on an interview… saying that Time’s Up rejected me and that’s not true, and she said she talked to Time’s Up.”

Reade pushed back at Milano’s assertion that Time’s Up, a 501(c)3 nonprofit administered by the National Women’s Law Center (NWLC) and established in the wake of the #MeToo movement, would not take Reade as a client or “made it sound like that there was no veracity to my claims,” Reade told Fox.

She told the publication she is “technically” still a Times Up and National Women’s Law Center client but they will not fund her case and risk jeopardizing their non-profit status. She is still listed in Time’s Up’s platform and if she sought a referral for an attorney, she told Fox, Time’s Up would help her without offering her financial assistance.

The Biden accuser told the Daily Caller News Foundation in an interview posted Saturday that she believes women’s groups that blame their silence on their nonprofit status do so out of  fear.

She speculated that many of these women’s groups rely on funding that comes from the Violence Against Women Act, which Biden introduced in 1990, and believes that these organizations worry they will lose this funding if Biden becomes president and they have spoken ill of him.

“I think there’s all kinds of reasons,” she told the DCNF. “There’s economic, there’s just fear of who he is and how powerful he is. I’m 56 years old, and I’ve kind of pushed beyond fear, I’m getting attacked I am getting harassed. But I think it’s important I stay strong and stay firm.”

Milano did not respond to a request for comment from the DCNF.