These two men say they support the protests but not the riots and are helping protect a tobacco store owner from looting
pic.twitter.com/PDn2Jd8iEB

While the men expressed support for the protests sparked by the death of George Floyd while he was in police custody, they condemned the violence and looting taking place.

“Basically you see the records that cops keep,” one man told Nesterak in a now-viral video posted to Twitter. “And cops are a lot less likely to try and tread on people’s rights when there’s other armed Americans with them. So I figured it’s about damn time that some heavily armed rednecks stood with fellow citizens.” 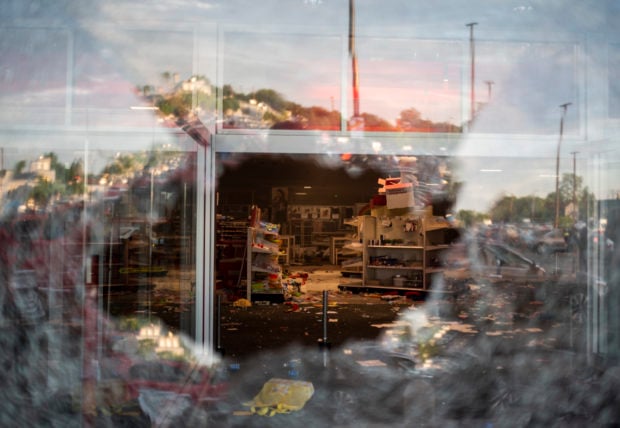 A view inside a Target store through a broken window on May 27, 2020 in Minneapolis, Minnesota. (Stephen Maturen/Getty Images)

The men described hearing someone talk about people “defending their businesses” against looters, so they decided to “kit up and go see if these guys need help.”

“It turns out these guys are out here with machetes and shattered windows trying to keep looters out of the businesses ’cause cops can’t get in here,” one man said. “So I figured before there were cops, there were just Americans, so here we are.”

“Bottom line, justice for Floyd and I hope they stop looting at some point. If there were more of us we could go stop them from looting, but it’s just us four,” said the man on the right.

“We definitely don’t agree with the looting, but we agree with the cause of the protests,” the other man said. (RELATED: ‘A Form Of Tyranny’: Tucker Carlson Rips Minneapolis Rioters And CNN’s ‘Dangerous’ Lies About Them)

Rioters across the city threw objects at police, burned buildings, and looted shops Wednesday night in the aftermath of Floyd’s death.