During the opening monologue of Wednesday night’s “Tucker Carlson Tonight,” Carlson referred to ongoing protests and riots against the death of George Floyd, whose death in police custody has “turned out to be a metaphor for abuse of power,” and cited demands to fire police and free criminals as examples of how the narrative of black “genocide” has been maintained by the media and supported by Democratic politicians.

“Genocide,” Carlson said incredulously after citing a quote from a group of pro athletes. “If you believed we were seeing genocide then you might understand the riots now in progress. There’s nothing worse than genocide. But is it happening? Is any of this true?”

The Fox News host argued that one might “begin to understand the riots now in progress” if such a claim were true.

“We should find out,” he said. “Facts matter. What exactly are the numbers? We found the numbers, and we’re going to go through them with you in some detail tonight because it’s worth it.”

“Since 2015, The Washington Post has maintained a comprehensive database of fatal police shootings in this country,” said Carlson. “Last year, the Post logged 1,004 killings. Of the 802 shootings in which race of the police officer and the suspect was noted, 371 of the those killed were white; 236 were black. The vast majority of those killed were not in fact, ‘unarmed.’ The vast majority were armed, and Africans American suspects were significantly more likely to have a deadly weapon than white suspects. Yet more white suspects were killed.”

Carlson counted “precisely ten cases” listed by the Post “in which unarmed African Americans were fatally shot by police. There were nine men and one woman.” (RELATED: Tucker Carlson Condemns Calls For ‘Lynch Mobs’ Designed To ‘Subvert Our Justice System’)

Then, the Daily Caller co-founder listed specifics about each one:

“The first was a man called Channara Pheap. He was killed by a Knoxville police called officer Dylan Williams. According to Williams, Pheap attacked him, choked him and then used a Taser on him … before the officer shot him. Five eyewitnesses corroborated the officer’s claim, and the officer was not charged.”

“The second case concerns a man called Marcus McVae. He was by any description a career criminal from San Angelo, Texas. He’d been ‘convicted of aggravated assault, assault on a public servant, and organized criminal activity.’ At the time he was killed he was wanted on drug dealing charges. A Texas state trooper pulled him over. McVae fled in his car, then he fled on foot into the woods. There, he fought with a trooper, and was shot and killed. The officer was not charged in that case.”

“Marzues Scott assaulted a shop employee. When a female police officer arrived and ordered the suspect toward her car, he instead charged her and knocked her to the ground. At that point, she shot and killed him. The entire incident was caught on body camera. The officer was not charged.”

“Ryan Twyman was being approached by two LA County deputies when he backed into one of them with his vehicle. The deputy was caught in the car door. He and his partner opened fire. The deputies were not charged in that case.”

“Melvin Watkins of East Baton Rouge, Louisiana was shot by a deputy, after he allegedly drove his car to toward the deputy at high speed. The deputy was not charged.”

“Isaiah Lewis, meanwhile, wasn’t just unarmed, he was completely naked. Williams broke into a house, and then attacked a police officer. The police tased Williams, but he kept coming at them and attacking. The officers shot him. They were not charged.”

“Atatiana Jefferson [sic] was shot by a Fort Worth deputy called Aaron Dean. A neighbor had called a non-emergency number after seeing Jefferson’s door open thinking something might be wrong. When police arrived, Jefferson saw them approach from a window and was holding a gun at the time. According to body camera footage, the office shot Jefferson within seconds. That officer has been charged with homicide.”

“Christopher Whitfield was shot and killed in Ethel, Louisiana. He had robbed a gas station. Deputy Glen Sims, said his gun discharged accidentally while grappling with Whitfield. Sims, who is black himself, was not charged in that killing.”

“Kevin Mason was shot by police during a multi-hour standoff. While Mason turned out not to have a gun, Mason claimed to have a gun, claimed to be armed and vowed to kill police with it. They believed him. Mason had been in a shootout with police years before.”

“And, finally, the tenth case concerns Gregory Griffin, who was shot during a car chase. An officer called Jovanny Crespo claimed he saw someone pointing a gun at him. Later, a gun was in fact found inside the vehicle and yet Officer Crespo was charged anyway with aggravated manslaughter.” 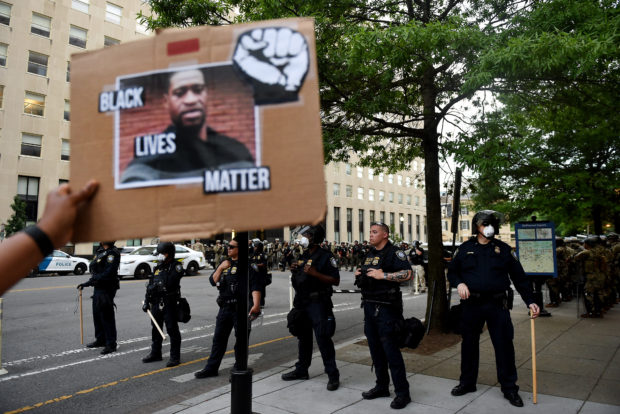 A demonstrator holds a picture of George Floyd during a face off with the police near the White House in Washington, DC, on June 3, 2020. (Photo by Olivier DOULIERY / AFP) (Photo by OLIVIER DOULIERY/AFP via Getty Images)

After the list, Carlson contended that an “officer was attacked” before the shooting in five of them and one was an accident, which “leaves a total of four deaths during a pursuit or in a standoff.”

“So out of four, in two of those cases, in fully half, the officer was criminally charged,” Carlson said. “Is it possible that more of these officers should have been charged? Of course it’s possible. Justice is not always served, that’s for sure. But either way, this is a very small number in a country of 325 million people. This is not genocide. It’s not even close to genocide. It is laughable to suggest it is.”

The Fox News host argued that the number of killing by police is actually “dropping” from numbers seen during former President Barack Obama’s presidency.

Meanwhile, the U.S. “remains a dangerous place for police officers,” with forty-eight “murdered in 2019,” more than all “unarmed suspects killed, of all races.” (RELATED: Brit Hume Condemns ‘Black Grievance Politics’: No Country Has ‘Ever Tried Harder To Right The Racial Wrongs’)

Carlson ended the monologue by citing the “7,407 black Americans” who were murdered in the U.S. in 2018. If those numbers continue “on a similar trajectory,” it would mean that “for every unarmed black person shot to death by police, more than 700 were murdered by someone else — usually someone they know.”

“Again, those are the facts,” he concluded. “They are not in dispute. Are African Americans being ‘hunted,’ as Joy Reid recklessly claimed on MSNBC recently? Or is something else happening? Is our nation being ripped apart by a total and complete lie, a provable lie. A lie used by cynical media manipulators and unscrupulous politicians who understand that racial strife, race hatred, is their path to power, even if it destroys the country? You have the facts now and you can decide what’s really going on.”