TikTok could become a powerful propaganda tool capable of shifting American public opinion if it remains in the hands of its Chinese parent company, national security analysts and China experts told the Daily Caller News Foundation.

The authoritarian regime could use data collected through TikTok to produce more targeted, and consequently, effective propaganda, the experts, who favored banning the app, said. The app could also be used to influence U.S. politics, spy on the nation, or suppress or promote content to benefit the Chinese Communist Party.

“You could influence political behavior or engage in information environment-shaping, or propaganda. All these things can be done, and have been done,” Stephen Yates, CEO of the public policy consultancy firm DC International Advisory, said of a foreign country’s ability to use social media platforms as weapons.

TikTok has faced increased scrutiny across both the U.S. government as well as private industry, and President Donald Trump floated banning the app. Microsoft is in preliminary talks to purchase TikTok from its parent company, ByteDance, the software company confirmed Sunday.

China could control what content users see on the app, suppressing videos that are critical of the authoritarian regime or amplifying ones it finds beneficial, according to Yates.

While TikTok is primarily known for its use among Generation Z to create and view dance and comedy videos, the app has already reportedly influenced U.S. politics on at least one occasion.

TikTok users coordinated an effort to get people who didn’t intend on attending a Trump campaign rally in Tulsa sign up for it, CNN reported in June. One TikTok post urging fans of Korean pop to sign up for June rally received over 100,000 likes. Mary Jo Laupp, a 51-year-old women in Iowa, reportedly kickstarted the troll campaign.

Laupp’s video encouraging people to register for free tickets to the rally garnered more than 2 million views. The Trump campaign disputed the claims, saying it weeds out phony registrations.

Yet demonstrations in Hong Kong that received worldwide attention were barely mentioned on TikTok, according to a Washington Post report.

A hashtag used to identify posts showing resistance to an extradition bill supposedly designed to weaken Hong Kong autonomy, #antielab, had only 11 posts on TikTok, but collected more than 34,000 posts on Instagram at the time of reporting. Meanwhile, Hashtags for #HongKongProtests on TikTok returned either a single video or an error message telling users that TikTok could not “find this hashtag: Check out trending videos.” 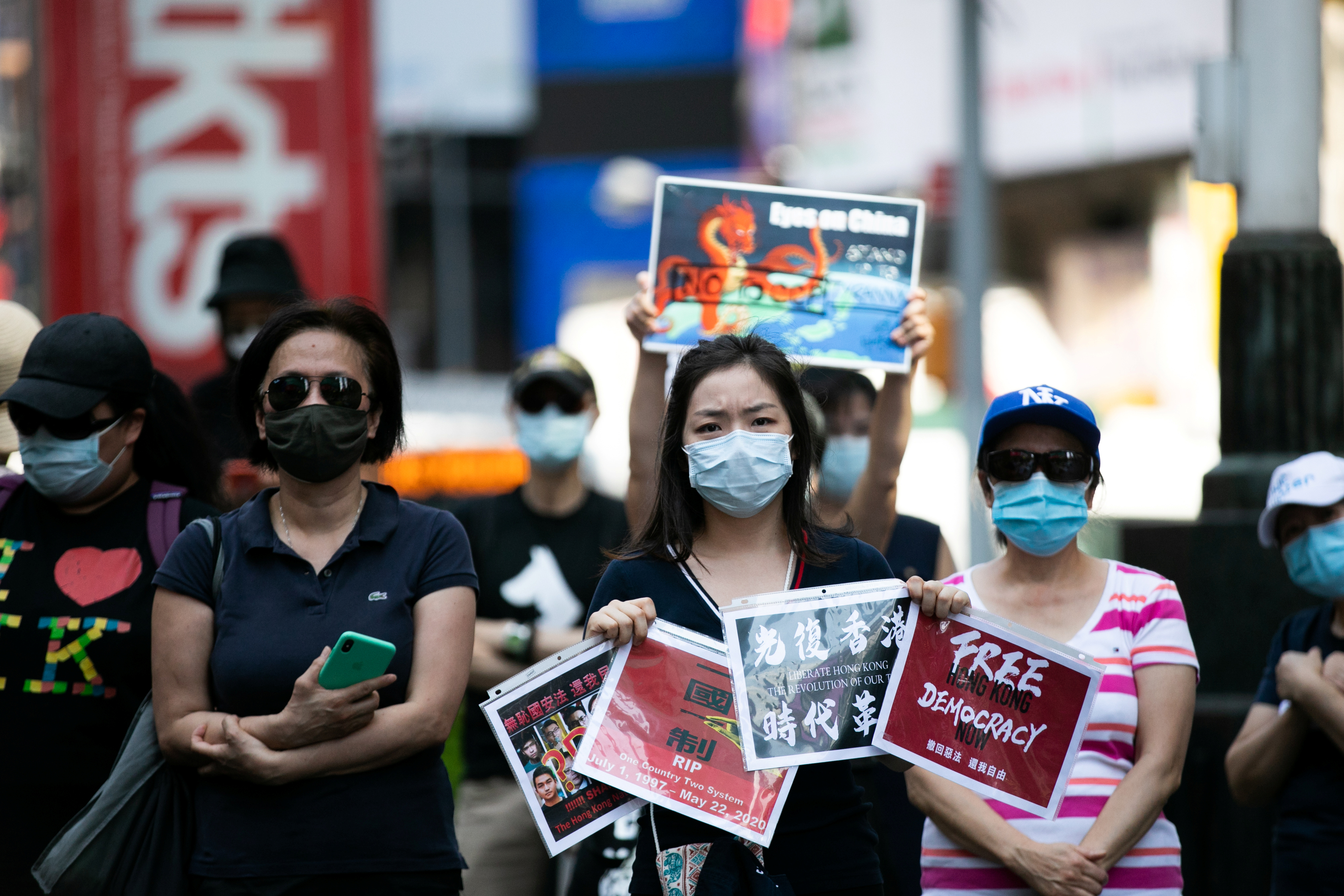 The app could similarly suppress content regarding China’s treatment of Uighurs, Yates told the DCNF. Numerous reports have shown Uighurs being held in concentration camps and being subjected to forced sterilization.

Yates, a foreign policy expert who worked as a deputy national security adviser to former Vice President Dick Cheney, compared TikTok’s potential political influence to how Russia used Facebook posts and advertisements to disrupt the U.S. political system ahead of the 2016 election.

The Russian government spread disinformation to users on a variety of social media platforms during the last presidential election cycle. Facebook gave Congress roughly 3,000 ads in 2017 with links to Russia. The company said it sold $100,000 worth of ads to Russian-linked sources that investigators believe were trying to influence the the 2016 election.

But when it comes to data collection, TikTok and Facebook can’t be equated, according to Yates.

Washington Post tech columnist Geoffrey Fowler argued on a July 13 that much of the concerns related to TikTok’s alleged privacy violations are driven by “xenophobia” and compared its data collection to Facebook, which owns Instagram.

“This would be a commercial and political communication platform that gives a hostile power access to people’s cell phones and computers in which their entire lives have become dependent,” Yates said of TikTok. The app is totally “within China’s sphere of influence,” he added.

And Matt Stoller, the Research Director at the American Economic Liberties Project, told the DCNF that the difference between a company like Facebook and TikTok is that one is “controlled by a greedy American” corporation, while the “other is controlled by a genocidal regime hostile to liberal democracy.”

TikTok executives “couldn’t attend hearings and testify because executives were located in #China,” Sen. Josh Hawley tweeted in May. He linked to a report that a former Disney executive, Kevin Mayer, would become the app’s new CEO.

“But this new executive lives in the USA,” the Missouri Republican continued. “I look forward to hearing from him. Under oath.”

Meanwhile, Facebook CEO Mark Zuckerberg, along with the CEOs of Google, Apple and Amazon, testified before the House Judiciary’s Subcommittee on Antitrust, Commercial and Administrative Law on July 29 over lawmaker concerns that they are building their empires through anti-competitive methods.

TikTok has the potential to be used as a spying tool for China, according to Dan Blumenthal, the director of Asian Studies at the American Enterprise Institute. (RELATED: TikTok Hires Former GOP And Democratic Congressional Staffers To Lobby On US Policy Ahead Of The Election)

“The Chinese are building a mass of information about the U.S. including a ‘human network map’ that makes connections it deems important among U.S. financial, corporate, policy media and political elites,” Blumenthal, who supports banning the app, told the DCNF. “This is both for espionage purposes as well as for purposes of influencing U.S. politics.”

Blumenthal did not elaborate on how such data could be used to spy on Americans.

But China’s National Intelligence Law gives the government authority to compel Chinese companies to collect and provide any information it requests, including data on foreign users, Quartz reported in 2017. The law makes spying a duty for Chinese companies, Yi-Zheng Lian, a former chief editor of the Hong Kong Economic Journal, wrote in a 2019 New York Times editorial.

“ByteDance collaborates with public security bureaus across China, including in Xinjiang where it plays an active role in disseminating the party-state’s propaganda on Xinjiang,” the report stated. ByteDance also established a joint venture in December 2019 with a Chinese state media group, Shanghai Dongfang Newspaper Company, Reuters reported in 2019.

The app collects troves of data on users, according to the company’s privacy policy. If a user downloads and opens an app without ever creating an account, for instance, then TikTok can collect a user’s IP address, browsing history on the app, mobile carrier, location data when using a mobile device and information on the device used to gain access to TikTok.

Once a user creates an account, TikTok can gather details about every video a user uploads, the length of time he or she watches a video, what type of content he or she like the most, which videos are shared, and any messages a user exchanges on the app. The app’s portal also asks users for permission to access other social media accounts, their phone number contact list, and geolocation data.

‘We are not the enemy’

Yates, Blumenthal and Stoller made their comments before TikTok CEO Kevin Mayer addressed concerns about data, before Trump threatened to ban TikTok and before the notion of Microsoft purchasing the app became public.

“TikTok has become the latest target, but we are not the enemy,” Mayer wrote Wednesday. He said TikTok will address concerns about “the company’s Chinese origins” “through greater transparency and accountability.”

Mayer did not address what the company would do if China demanded user data. But TikTok dismisses claims that the company is beholden to the authoritarian regime.

“Our security team is led out of the U.S. by our Chief Information Security Officer who has 30-years of Department of Defense and financial services industry experience,” a company spokesperson said in a statement to the DCNF. “TikTok collects much less U.S. user information than many of the companies in our space and stores it in the U.S. and Singapore.”

U.S. officials have reported evidence that TikTok is providing personal user data to the CCP. The company is under national security review, Reuters reported Wednesday.

This photo shows the logo of the social media video sharing app Tiktok displayed on a tablet screen in Paris. (LIONEL BONAVENTURE/AFP via Getty Images)

Regardless, companies often use personal data to dramatically influence how people behave and think, according to researchers at Cracked Lab, an independent research institute based in Austria that measures how information networks impact human thinking.

“[D]ata-driven persuasion undermines the concept of rational choice and thus the basic foundation of market economy,” the group’s researchers wrote in a 2017 report, referring to methods and techniques tech companies use to manipulate users into engaging with content. “When used in political campaigns or in other efforts to shape public policy, it may undermine democracy at large.”

A bipartisan slate of lawmakers and U.S. officials have determined TikTok is a major threat. U.S. Secretary of State Mike Pompeo, for example, suggested during in a July 7 Fox News interview that Americans should download the app “only if you want your private information in the hands of the Chinese Communist Party.”

The Department of Defense also advised military personnel in January to remove the app for similar reasons, The New York Times reported.

But a federal ban of the app is too extreme, according to Peter Micek, a digital human rights expert at Access Now, a digital rights nonprofit.

Much of the concerns related to TikTok’s ties to China can be solved through comprehensive data protection regulations, Micek argued. The General Data Protection Regulation, a European Union law passed in 2016, gives social media users control over their own personal data, ZDNet reported in 2019.

The law requires companies that gather a person’s personal information to disclose the data they collect, declare the reason for processing such data, and explicitly state how long the information will be retained, ZDNet noted. Companies must also explain if any data is being redirected to third-party groups.

“It’s hard to convey just what a yawning gap there is between elite opinion and the obvious right thing to do. The [People’s Republic of China] is a dangerous expansionist threat. Literally the least we could do is not allow them to manipulate tens of millions of Americans,” he wrote in a July 20 tweet, referring to critics of banning the application.