YouTube has reinstated a viral video in which a doctor describes abortion procedures after the platform temporarily removed the video Friday, saying it violated YouTube guidelines.

YouTube temporarily deleted the video Friday afternoon, according to emails provided to the Daily Caller News Foundation by Live Action. Live Action immediately appealed the removal of their video and used social media to alert followers about the incident.

BREAKING: @YouTube just DELETED one of our Abortion Procedures videos, which had over 1.8 million views, claiming it violated “Community Guidelines”

The video has been live since 2016, includes medically accurate animations of abortion & is narrated by a former abortionist 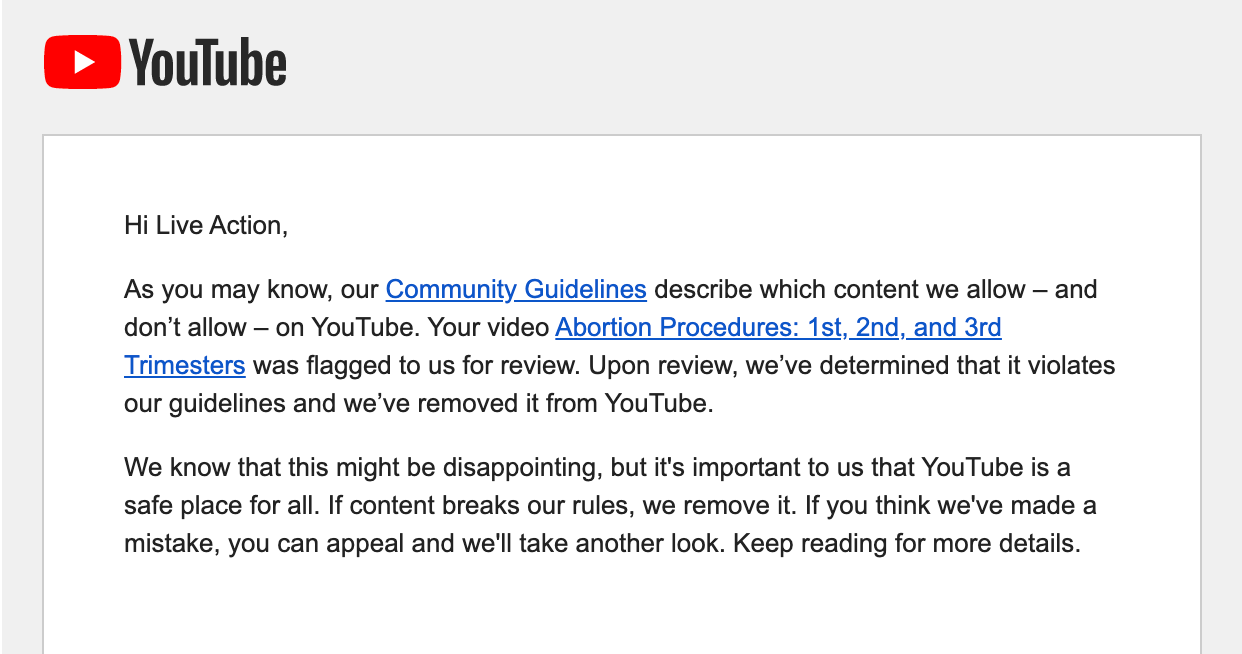 YouTube told the DCNF that the video was mistakenly removed and was reinstated minutes after Live Action appealed. (RELATED: In Check On Live Action, Fact Checkers Cited Doctor Who Openly Spewed Hate For Anti-Abortion Groups)

“With the massive volume of videos on our site, sometimes we make the wrong call,” a YouTube spokesman told the DCNF. “When it’s brought to our attention that a video has been removed mistakenly, we act quickly to reinstate it. We also offer uploaders the ability to appeal removals and we will re-review the content.”

YouTube also told the DCNF that YouTube’s enforcement system uses machine learning to detect potentially harmful content before sending this content to human reviewers for assessment. YouTube noted that due to the coronavirus pandemic, the platform relies more heavily on technology and automated systems that may remove content in violation of YouTube’s standards without human review.

This is not the first time that Live Action content has been temporarily removed or censored on social media platforms. (RELATED: ‘We Were Targeted’: Live Action Founder Lila Rose Says Facebook Censored Them With Biased Fact Checkers)

Live Action founder and president Lila Rose told the Daily Caller News Foundation in December that she expected Live Action would face suppression on social media in 2020. Rose said the organization had been suppressed on Facebook, on Twitter, and on Pinterest during 2019.

“Even with this level of Silicon Valley suppression, Live Action is seeing the pro-life movement grow at rapid speeds and increased calls for our content to be distributed globally to change more hearts and minds,” Rose said in December.

“The issue was the result of a human error by a moderator,” the TikTok spokesman told the DCNF in January. “We apologize for the mistake and have reactivated the account.”