Californians are struggling with raging wildfires, roving blackouts, and sky high gas taxes while simultaneously dealing with government-imposed economic lockdowns and a pandemic that has so far killed more than 11,000 people in the state.

Northern California had roughly 33 active wildfires Wednesday that had burned more than 141,000 acres as they spread, media reports show. The ongoing fires are accompanied by an intense heatwave, Reuters reported, that has prompted citizens to crank up their air conditioners, placing pressure on California’s already-taxed energy grid and triggering roving blackouts.

The blackouts and fires come amid a pandemic, which originated in China before spreading to the United States, where it has reportedly killed more than 170,000, according to data from John Hopkins University. Gov. Gavin Newsom imposed lockdowns on the state in March to slow the spread, and then rolled back reopening the state in July following a surge in cases.

California also has the highest gas prices in the country, according to data from AAA Gas Prices. The high prices are due in part to a 3.2 cent fuel tax increase in July, bringing the total tax to around 50.5 cents per gallon. Former Gov. Jerry Brown’s signed legislation in 2017 raising the tax, which is expected to bring in $7 billion in 2020, media reports from July show.

The LNU Lightning Complex fires which started Monday and Tuesday, have burned more than 32,000 acres in Napa, Sonoma and Solano counties, state officials said. Evacuations were ordered early Wednesday for citizens in Vacaville, a city of 100,000 residents between San Francisco and Sacramento, CNN reported Wednesday.

More than two dozen wildfires are burning their way across the state, torching tens of thousands of acres as of Wednesday.

There are two other zones of wildfires blazing across Northern California, CNN reported. The SCU Lightning Complex fires have raged through Santa Clara County, creating 20 separate fires and burning 85,000 acres in the process. At least two first responders have been injured, according to CNN. 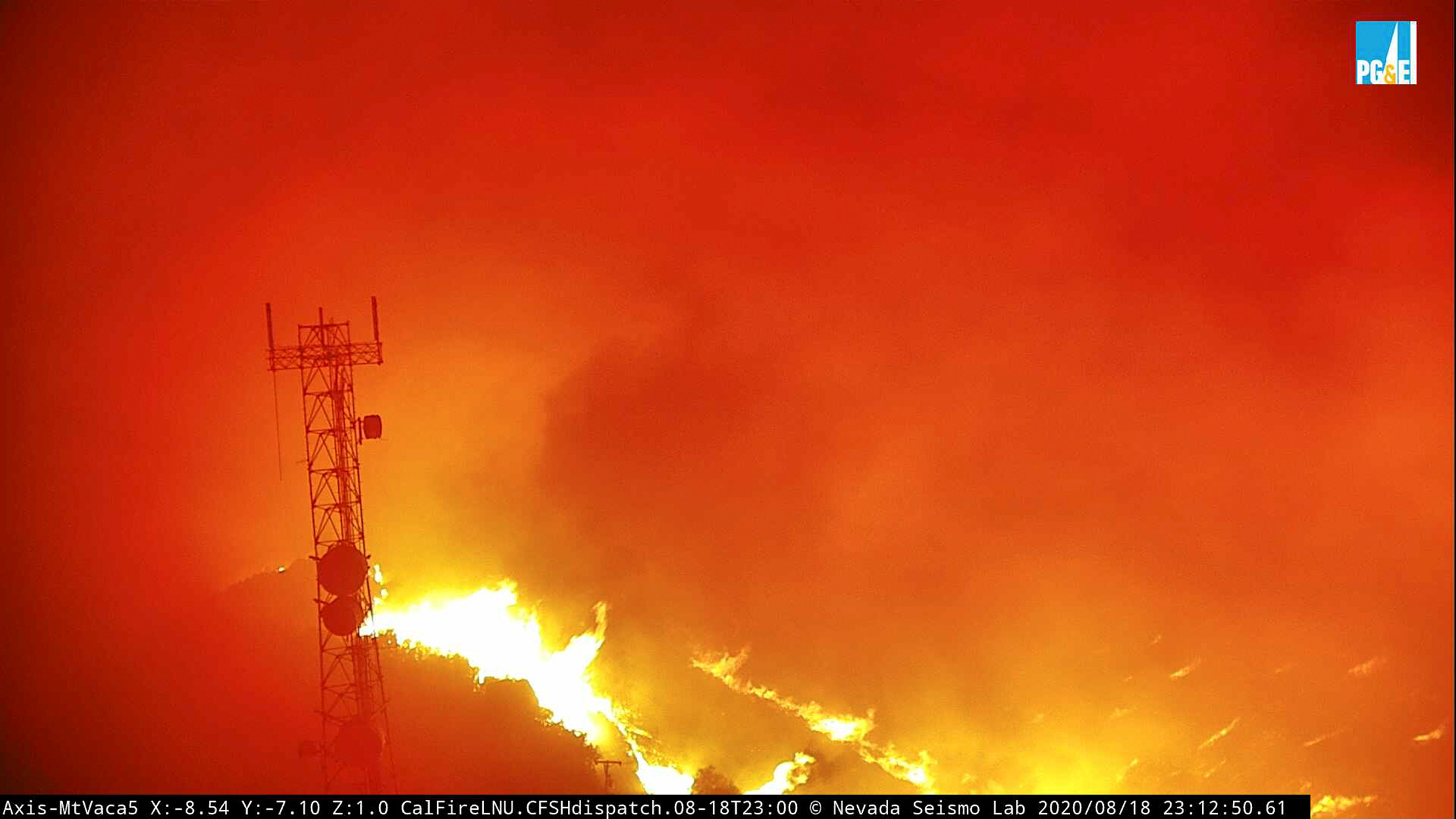 Flames from the Hennessey Fire (www.alertwildfire.org/Handout via REUTERS)

Separately, the CZU August Lightning Complex is flowing through San Mateo and Santa Cruz counties, both of which are composed of five larger fires burning about 10,000 acres, CNN noted. Three first responders have been hurt fighting these fires in an operation entailing nearly 600 personnel and seven helicopters.

California has experienced numerous wildfires in the past. State officials evacuated roughly 100,000 people in 2019 from their homes as a wildfire burned through the northern edge of Los Angeles, officials said in October of that year. The fire burned more than 25 homes and 23,000 residences were ordered to evacuate, officials said at the time.

The Woolsey Fire was one of two wildfires that burned through Ventura and Los Angeles counties in 2018. The two blazes scorched tens of thousands of acres, reports in 2018 showed. More than 80 people were killed in the Camp Fire, which ripped through the northern part of the state at approximately the same time as Woolsey.

The state’s energy system operator, California Independent System Operator (CAISO), issued a Stage 3 emergency Friday for the first time in 20 years which allows them to institute rotating outages to deal with high power demands, according to a statement. (RELATED: ‘Gaps’ In Renewable Energy Led To Blackouts For Millions Of Californians, Gov Newsom Says)

CAISO said the blackouts are due to the unexpected loss of a 470-megawatt power plant, as well as a loss of nearly 1,000 megawatts of wind power in another statement on Saturday. Newsom, a Democrat and former mayor of San Francisco, vowed in a statement Monday to conduct an investigation into why CAISO imposed two nights of rolling blackouts on Aug. 15 and 16.

Californians were subjected to similar blackouts in 2019. California public utility Pacific Gas & Electric (PG&E) imposed blackouts that year to forestall wildfires. PG&E told state regulators in an October 2019 filing that one of the utility’s snapped wires was found on a transmission tower near where the 2019 Kincade Fire began.

Brown signed a bill in 2017 imposing a 12-cents-per-gallon increase on gasoline and raising the percent tax on diesel fuel by about 20 cents a gallon. Those sales tax amounts rise as the underlying price of fuel increases.

The State Board of Equalization, the agency responsible for administering California’s tax policies, sometimes annually adjust the state’s two excise taxes to help offset changes to the sales tax. The recent increase has still makes California the second-highest gas tax in the country behind Pennsylvania, according to gas price trackers. 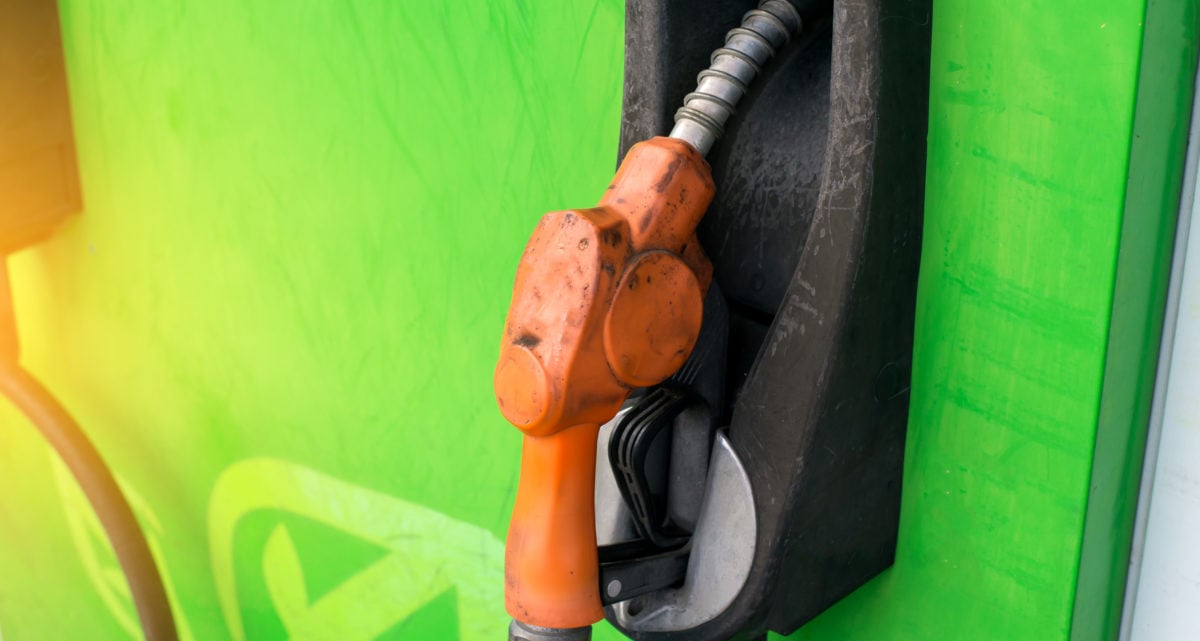 An unpopular gas tax will be on the November ballot. Shutterstock

Analysts say taxes contribute to the pain Californians feel when they fill up at the pump.

“The bottom line is that the first $1.12 per gallon paid at the pump goes to ever-increasing state taxes and to California’s extensive regulatory regime,” Kevin Slagle, vice president of communications for Western States Petroleum Association, told the Daily Caller News Foundation in March.

The July 1 tax increase coincided with the pandemic lockdowns, which resulted in an economic recession and record unemployment rates nationwide. Newsom’s stay-at-home orders in March forced non-essential businesses to close, prompting millions of Californians to file for unemployment. He predicted in May that the state would hit 18% unemployment.

Some have called for reduction in taxes amid the economic hardship.

“Do you really want to depress behavior that could help the economy in the midst of a pandemic and recession?” Rob Peroni, a law professor at the University of Texas at Austin who focuses on tax issues, told the Los Angeles Times in June.“This is a complex thought for many people.”

Peroni added: “They want lower prices and they want them now.”