The office of freshman Republican Georgia Rep. Marjorie Taylor Greene is pushing back against allegations that an alleged Facebook post from 2018 implicating a wealthy Jewish family in a deadly forest fire is anti-Semitic, calling the claims a “smear” campaign.

Greene implicated “Rothschild Inc” in the fire that killed 85 people and burned through more than 150,000 acres, in a now-deleted 2018 Facebook post, according to the screenshot.

Here Marjorie Taylor Greene says the deadly California wildfires may have been caused by lasers from space – tied to the Pacific Gas & Electric Company pic.twitter.com/4qMmYZRYrr

“If they are beaming the suns energy back to Earth, I’m sure they wouldn’t ever miss a transmitter receiving station right??!! I mean mistakes are never made when anything new is invented,” Greene’s alleged post reads. “What would that look like anyway? A laser beam or light beam coming down to Earth I guess. Could that cause a fire? Hmmm, I don’t know. I hope not! That wouldn’t look so good for PG&E, Rothschild Inc, Solaren or Jerry Bown who sure does seem fond of PG&E.”

Linking the Rothschild family to conspiring to cause damage for money is an anti-Semitic conspiracy theory that has been used by QAnon, according to The Jerusalem Post.

The Rothschild family has been falsely linked to 9/11 conspiracies. It also has been accused of interfering in the American Revolution, financing Nazism and creating Israel by anti-Semitic theorists, according to the Anti-Defamation League.

Greene’s communications director, Nick Dyer, pushed back against allegations that Greene promoted anti-Semitic conspiracies in a statement to the Daily Caller.

Dyer did not confirm nor deny that the screenshots posted to Twitter are legitimate.

The California Department of Forestry and Fire Protection determined, after an investigation, that the Nov. 8 fire was caused by electrical transmission lines owned by Pacific Gas and Electricity. The fire was exacerbated by “red flag conditions consisting of strong winds, low humidity and warm temperatures” that caused the fire to spread rapidly. 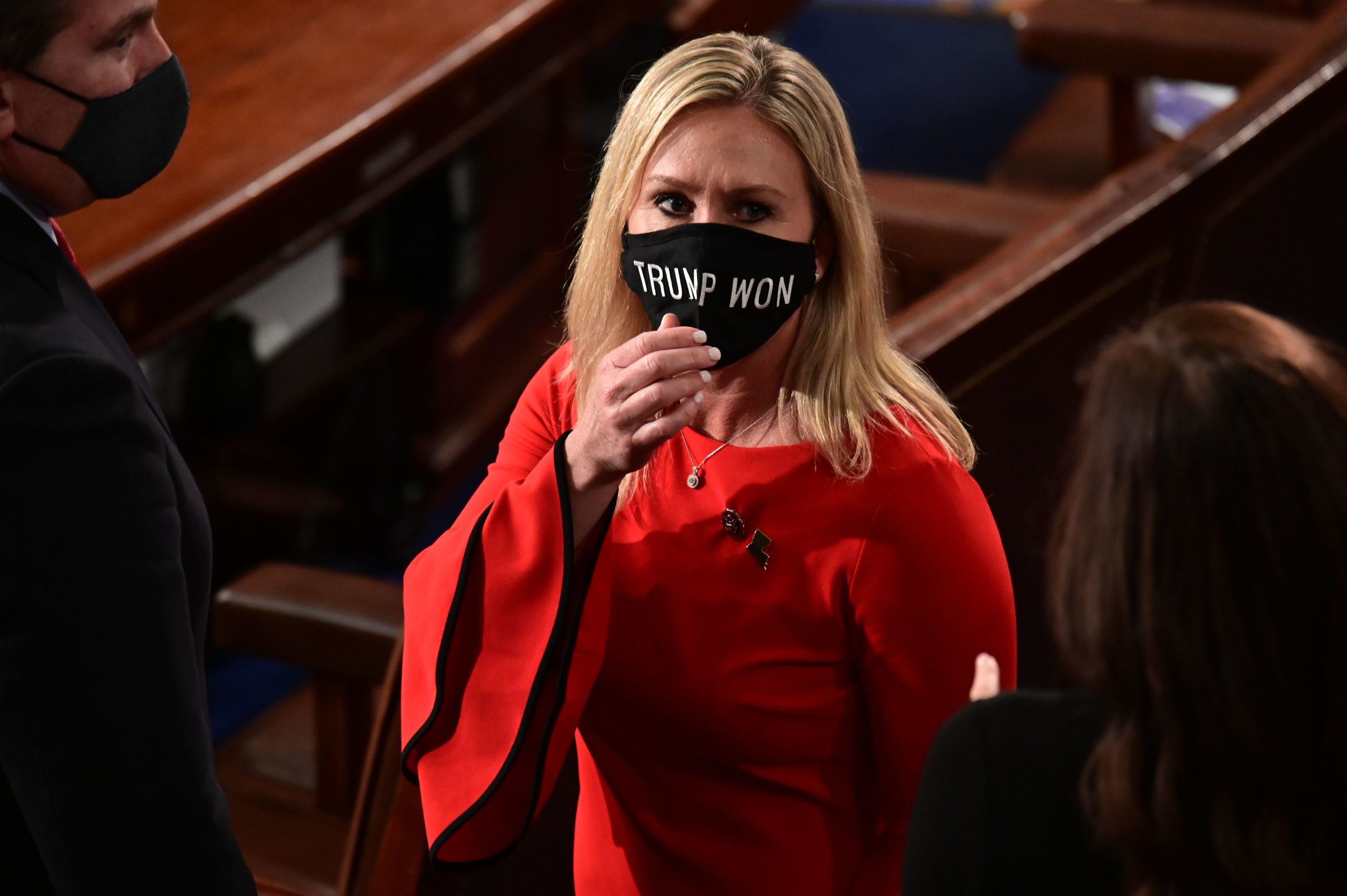 US Rep. Marjorie Taylor Greene (R-GA) wears a “Trump Won” face mask as she arrives on the floor of the House to take her oath of office as a newly elected member of the 117th House of Representatives in Washington, DC on January 3, 2021. (Photo by ERIN SCOTT / POOL / AFP) (Photo by ERIN SCOTT/POOL/AFP via Getty Images)

Greene has since refused to walk back the comments.

Greene also allegedly “liked” Facebook posts in both 2018 and 2019 that called for shooting House Speaker Nancy Pelosi in the head and supported the execution of federal law enforcement officers who she thought were in the “deep state,” according to CNN. (RELATED: News Crew Kicked Out Of Town Hall After Asking Rep. Marjorie Taylor Greene A Question)

Democratic California Rep. Jimmy Gomez announced Thursday he would introduce a resolution to expel Greene from Congress following the reports.