On the morning of April 15, 2013, Islamic terrorists detonated homemade bombs a short distance from the finish line of the Boston Marathon, killing three people and injuring over 260 others.

The attacks were carried out by Dzhokhar Tsarnaev and his older brother Tamerlan Tsarnaev.

Tamerlan Tsarnaev, who was 26 at the time, died after he engaged in a gunfight with police and after he was run over by his brother as Dzhokhar Tsarnaev fled the scene. Police later discovered and captured Dzhokhar Tsarnaev hiding in a boat in the Boston suburbs.

In 2015, authorities convicted Dzhokhar Tsarnaev for the deaths of Krystle Campbell, Martin Richard and Lingzi Lu, who died at the marathon, as well as police officer Sean Collier, who Tsarnaev shot and killed while Collier was protecting the Massachusetts Institute of Technology. (RELATED: Supreme Court Will Hear Boston Bomber Death Sentence Appeal)

Tsarnaev is currently being held in federal prison. The Supreme Court agreed in March to review a lower court’s opinion that removed his death sentence. The White House indicated that Biden has “grave concerns” about Tsarnaev being put to death. 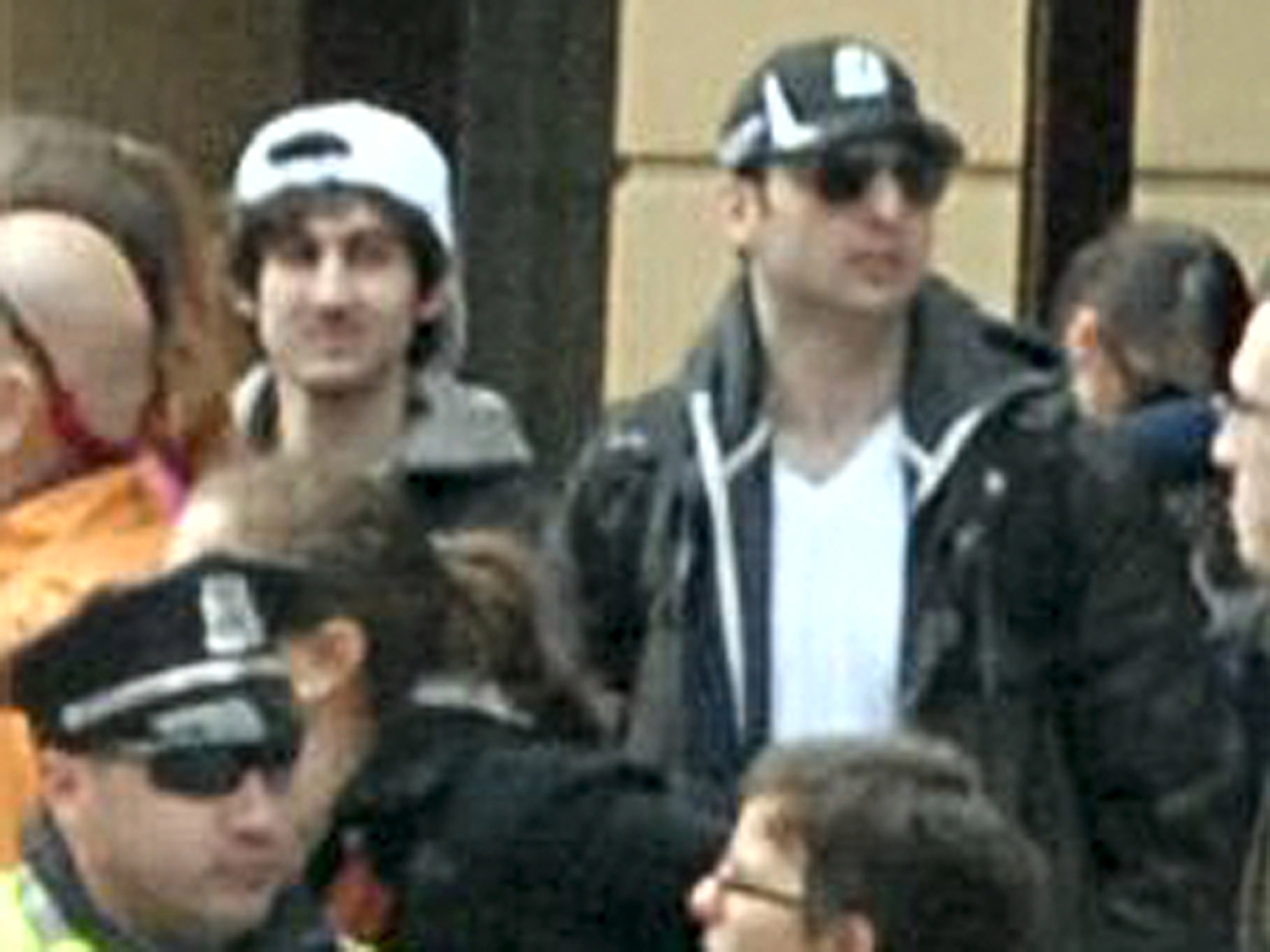 BOSTON, MA – APRIL 15: In this image released by the Federal Bureau of Investigation (FBI) on April 19, 2013, two suspects in the Boston Marathon bombing walk near the marathon finish line on April 15, 2013 in Boston, Massachusetts. The twin bombings at the 116-year-old Boston race resulted in the deaths of three people with more than 170 others injured. (Photo provided by FBI via Getty Images)

“President Biden made clear, as he did on the campaign trail, that he has grave concerns about whether capital punishment, as currently implemented, is consistent with the values that are fundamental to our sense of justice and fairness. He’s also expressed his horror at the events of that day and … Tsarnaev’s actions,” White House Press Secretary Jen Psaki said in March, according to CNN.

The heroism of those at the marathon who aided their fallen brothers and sisters inspired the 2016 movie “Patriot Day,” and Americans commemorate the day of the bombing through the slogan “Boston Strong.” Among many other first responders and law enforcement officers, former New England Patriots offensive lineman Joe Andruzzi, Boston Marathon spectator Carlos Arredondo, and Dr. Allan Panter were quick to aid those injured in the bombing.

Joe Andruzzi formerly played as an offensive lineman for the New England Patriots. He was at the finish line of the Boston Marathon with his wife hosting an event for his charitable foundation when the bombs went off. Photos show Andruzzi carrying a woman away from the finish line close to the scene of the explosions, ESPN reported in 2013.

“Jen and I are safe,” he tweeted at the time, the publication reported. “Our thoughts & prayers are with all the victims and their families impacted at today’s Boston Marathon. TY to all our emergency personnel.” (RELATED: ‘F*ck You, I Can Walk’: Survivor Informs Boston Bomber He’s Taken Nothing From Her)

The former football player’s three brothers, New York City firefighters, were active in responding to the terrorist attack on September 11, 2001. 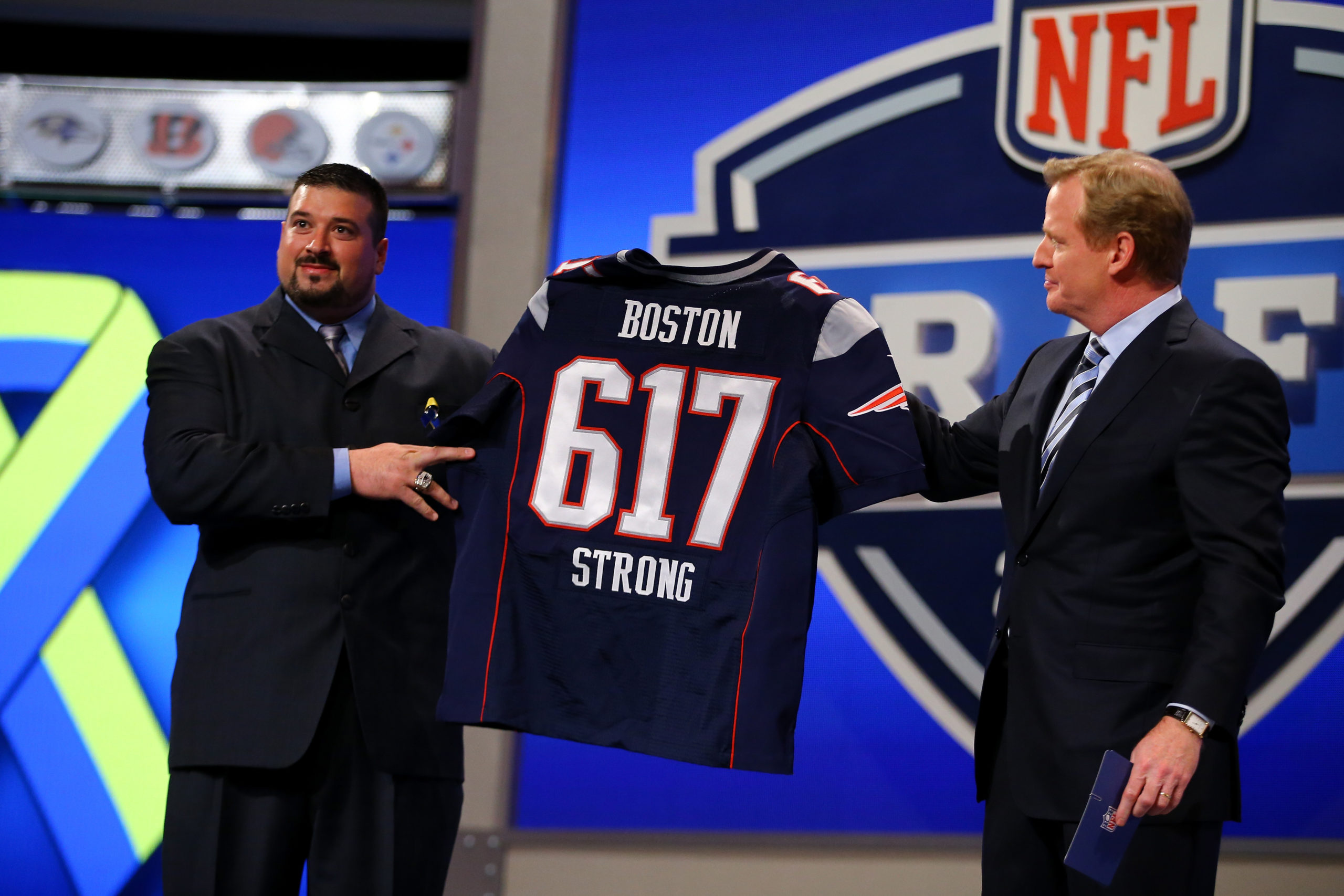 NEW YORK, NY – APRIL 25: Former New England Patriots player Joe Andruzzi (L) and NFL Commissioner Roger Goodell hold up a New England Patriot jersey with the # 617 on it in honor of the victims and those affected by this years bombing at the Boston Marathon in the first round of the 2013 NFL Draft at Radio City Music Hall on April 25, 2013 in New York City. (Photo by Al Bello/Getty Images)

“Marathon Monday should be about uplifting stories, personal challenges and fundraising milestones, but today’s bombings irrevocably changed that,” Andruzzi said in a statement following the bombings, according to ESPN. (RELATED: Justice Departments Asks Supreme Court To Reinstate Death Sentence For Boston Marathon Bomber)

“While I appreciate the interest in hearing our perspective on today’s horrific events, the spotlight should remain firmly on the countless individuals — first responders, medics, EMTs, runners who crossed the finish line and kept on running straight to give blood, and the countless civilians who did whatever they could to save lives,” he continued. “They were the true heroes. Our thoughts and prayers go out to all those affected by this senseless tragedy.”

Carlos Arredondo, the father of a fallen soldier, was watching the Boston Marathon carrying a camera and American flag when the bombs went off. Arredondo’s son was previously killed in Iraq, and when Marines came to his home to tell him the news, Arredondo set himself on fire in the Marine’s van, according to the Washington Post. Arredondo’s other son later committed suicide.

When the terrorist attack happened on April 15, 2013, Arredondo ran to the assistance of those injured. He also took four pictures of a man who had been severely injured and whose leg was only bone below the knee, according to WaPo. Arredondo and another bystander tied up the man’s leg using pieces of a random sweater on the ground for a tourniquets, and attempted to distract the injured man from the carnage.

Photos show Arredondo pushing a pale, bloodied, and severely injured man in a wheelchair down the street before helping the man into an ambulance.

“I did my duty,” Arredondo later said, WaPo reported. 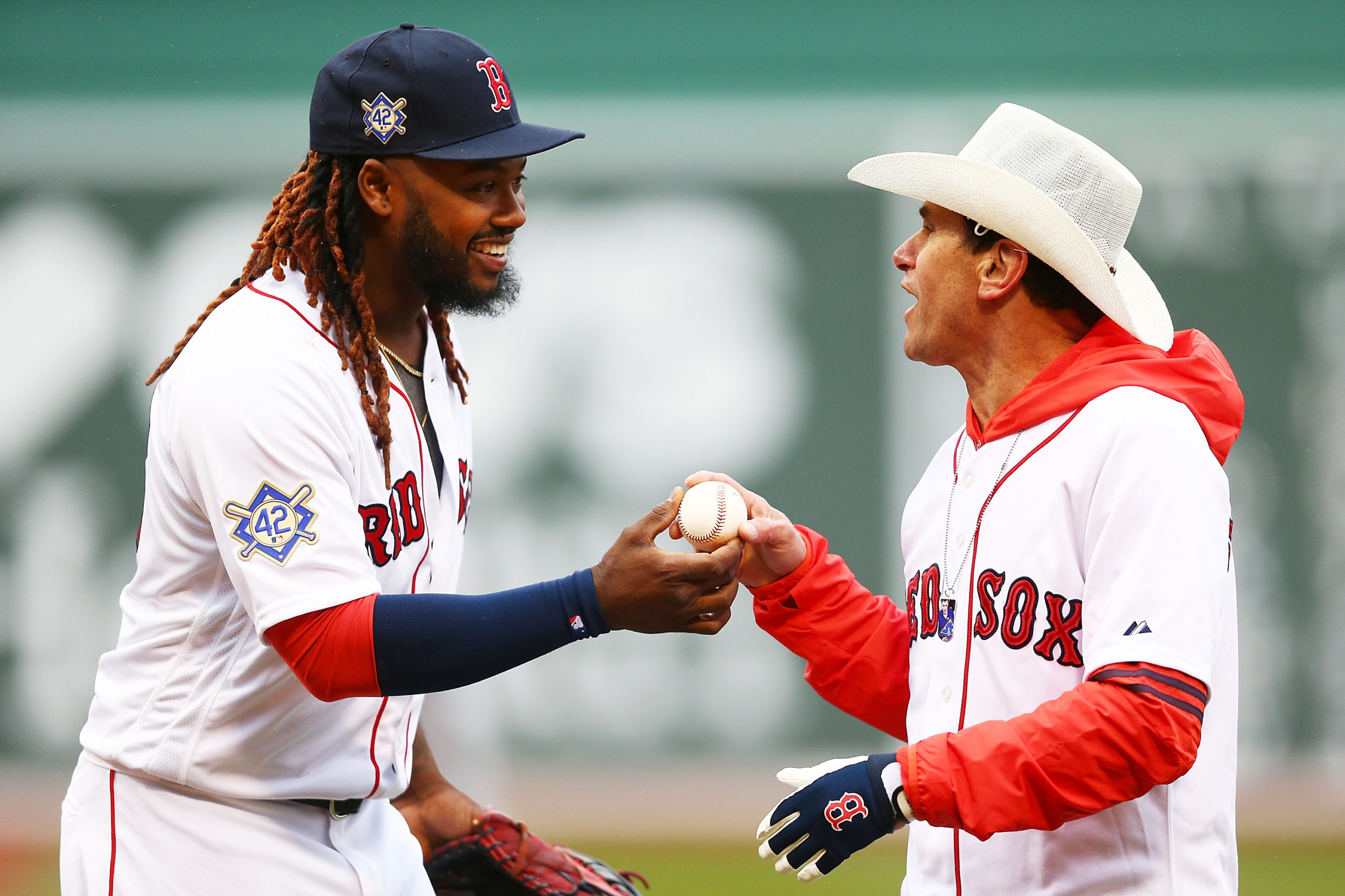 BOSTON, MA – APRIL 15: Boston Marathon bombing rescuer Carlos Arredondo is greeted by Hanley Ramirez #13 of the Boston Red Sox after throwing out the ceremonial first pitch before a game between the Boston Red Sox and the Baltimore Orioles on April 15, 2018 at Fenway Park in Boston, Massachusetts. (Photo by Adam Glanzman/Getty Images)

Dr. Allan Panter, who went to Boston from Gainesville, Georgia, to watch his wife run the marathon, was one of the first responders when the bombs went off as he stood near the finish line, according to the local outlet WDUN.

“I started trying to control the airway, another gentleman started doing CPR and we worked until we got a stretcher there,” Panter told ABC News at the time, WDUN reported.

The doctor described how he and another volunteer attempted to aid a woman who had been seriously injured right after the bombs went off.

“We had a pulse until we got her to the medical tent and then we lost her,” he said. 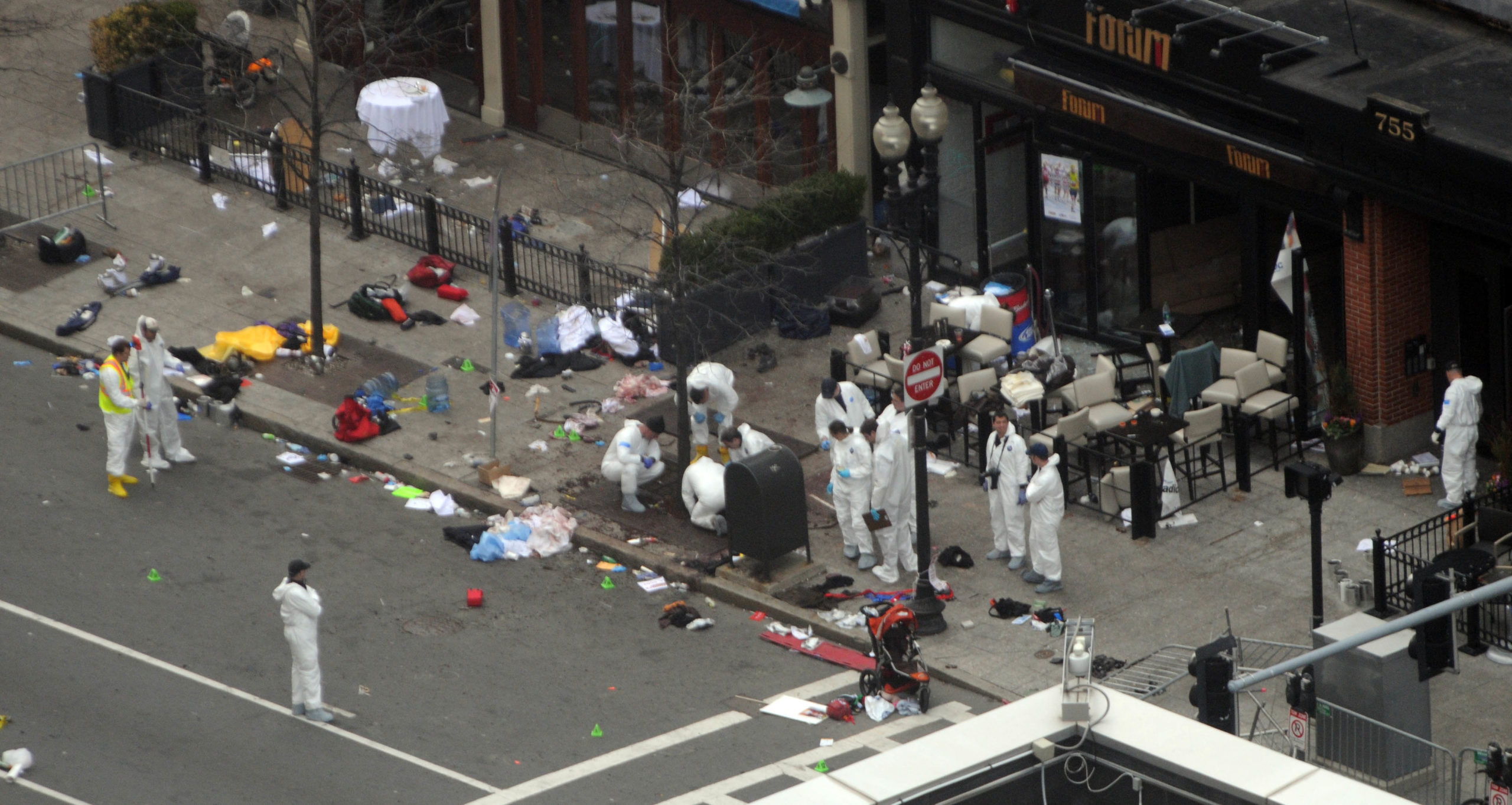 Allan Panter said the scene was a “mangled mess,” telling ABC that “it was mostly lower extremity blast injuries, one gentleman minus both his legs below the knees, and everybody else had some type of leg fractures, leg wounds,” according to WDUN.

His wife described her fright and confusion after hearing an explosion as she came close to finishing the race. She found him covered in blood about an hour and a half after the bombs went off, she said.

“Knowing my husband was at the finish line…he was either hurt or helping,” said Theresa Panter. “I’m thankful to God that he was helping.”

“He basically has told everybody, ‘I was just doing my job, you know, I’m not a hero,'” she added.