The union that failed to unionize the workforce of an Amazon warehouse in Bessemer, Alabama, announced Monday that it filed charges with the federal labor board, demanding a do-over election.

The Retail, Wholesale and Department Store Union (RWDSU) alleged that Amazon intimidated and threatened its workers during the unionization election, according to the charges it filed with the National Labor Relations Board (NLRB) late last week. The union filed 23 total charges against Amazon, which is enough for the labor board to “set the election aside,” the union said Monday

“[Amazon] lied and tried to game the system,” RWDSU President Stuart Appelbaum said after the vote failed earlier this month. “Not only did they take full advantage of our terrible labor laws, we contend that they broke the law repeatedly with their no-holds-barred effort to stop workers from forming a union.”

The NLRB reported April 9 that 1,798 workers voted against unionization compared to just 738 who voted in favor. Roughly half of the warehouse’s 5,876 employees participated in the mail ballot election. (RELATED: Labor Union That Failed To Organize Amazon Workers Declares Moral Victory, Promises To Challenge Election Results. Here’s What Happens Next)

Amazon allegedly threatened the warehouse workers with messages saying the facility might close or undergo massive layoffs if the union vote were to succeed, according to the charges. The union also alleged that the company told workers they’d lose health insurance, certain benefits like time off and would see their pay diminish if they unionized. 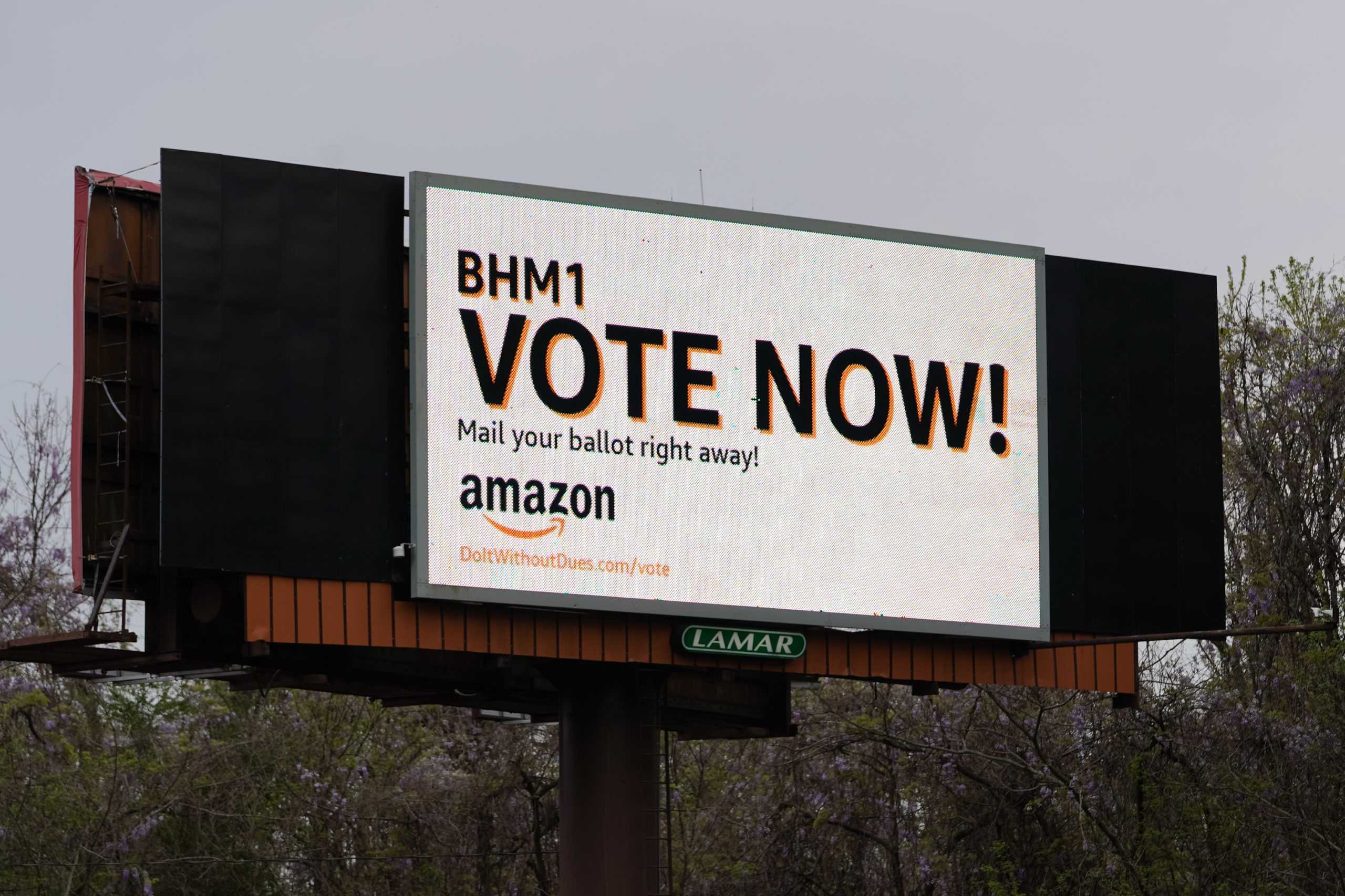 During the election, Amazon also hired local police officers to patrol the parking lot where RWDSU organizers had set up to speak with employees about the merits of forming a union. The union said the presence of law enforcement created an “atmosphere of coercion and intimidation.”

The charges even accused Amazon of coercing the local government into changing the timing of a nearby traffic light to obstruct organizers’ movements.

The union’s main arguments revolved around a ballot collection box that was installed on warehouse property. In the run up to the election, Amazon had reportedly asked U.S. Postal Service officials to install a ballot mailbox on the facility’s property, according to The Washington Post.

RWDSU argued the presence of the ballot box suggested to workers that it was Amazon, not the NLRB, that controlled the mechanism of the election, the charges said. Workers were therefore influenced to vote against unionizing fearing that Amazon would see how they voted, according to the union.

“We said from the beginning that we wanted all employees to vote and proposed many different options to try and make it easy,” an Amazon spokesperson told the Daily Caller News Foundation in a statement last week. “The RWDSU fought those at every turn and pushed for a mail-only election, which the NLRB’s own data showed would reduce turnout.”

“This mailbox — which only the USPS had access to — was a simple, secure, and completely optional way to make it easy for employees to vote, no more and no less,” the statement continued. (RELATED: Amazon Warehouse Workers Overwhelmingly Reject Unionization Bid, Organizers Cry Foul)

The NLRB regional director must now determine whether to hold a hearing and if a second election is necessary, NLRB spokesperson Kayla Blado told the DCNF last week. It is unclear how long the process will take and if the charges will yield the union’s desired result.