“You can do absolutely ANYTHING at CNN and not be fired if you’re liberal enough,” McCain tweeted to her hundreds of thousands of followers Thursday. (RELATED: ‘He Provided A Public Service’: Joy Behar Thanks Jeffrey Toobin For Distracting From Trump)

“Again, this is garbage – zoom dick,” she said, before deleting the post. (RELATED: ‘My Ancestors Fought In The American Revolution’: Meghan McCain Speaks Out On Meghan Markle Interview As ‘#AbolishTheMonarchy’ Trends) 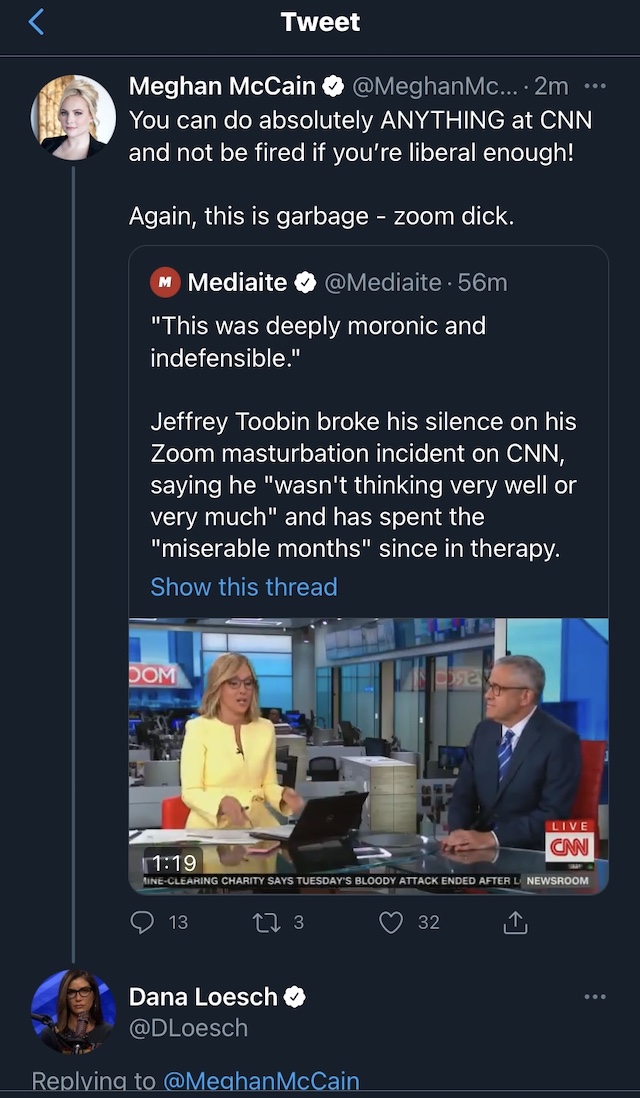 “The View” co-host’s original post included a screenshot from Toobin’s appearance on the network explaining what happened, saying he “wasn’t thinking very well or very much” at the time.

“This was deeply moronic and indefensible.”

After McCain deleted her first post, she tweeted a second one with the same piece and called it “garbage.”

“What does working at a food bank have to do with this?” she added, noting how the CNN analyst said he had done some “public service” and worked “in a food bank” since.

The former Fox News co-host wasn’t the only journalist and political commentator who caught the interview and commented about Toobin’s return.

Jeffrey Toobin is sorry for the zoom dick, and in related news my unemployed friends in journalism (who have never once masturbated in front of their colleagues!!) are still unemployed https://t.co/lV2KYhRvkL

If Tucker Carlson did what Jeffrey Toobin did, the left would be calling for him to be placed on a Sex Offender List.

Instead, CNN gives him a job and allows him to go on a PR tour.

Smdh. I knew they would rehabilitate him. Nice to be a privileged idiot white man child. #JeffreyToobin https://t.co/I9P9Baa6Mz

Sigh… to recap for the “what’s wrong with this” dudebros: