The drugs flowing over the border are leading to an uptick in fentanyl deaths, and experts are split about how to solve it.

The U.S. Drug Enforcement Agency has called fentanyl the “primary driver” of the record 92,183 drug overdose deaths in 2020. Many drug dealers use fentanyl to make money and smuggle it through the southern border mixed with other drugs like heroin, methamphetamine, and cocaine to make them more potent — and more deadly — according to the U.S. Drug Enforcement Agency.

“Look, everyone needs to understand drug cartels are vicious, they’re violent and it’s all about the dollar bill. It doesn’t matter if it’s 2021 or 2020 or 2016, drug cartels are going to get their drugs across our border,” Houston Drug Enforcement Administration Special Agent Daniel Comeaux previously told the Daily Caller News Foundation.

The trafficking of fentanyl has gotten even worse in 2021. Border officials seized nearly 2,400 more pounds of fentanyl from January to April 2021 than during the same period in 2020.

Border patrol officials do not have the resources or officers to handle the influx, Marguerite Telford, director of communications for the Center for Immigration Studies, told the DCNF.

“Officers right now are taken off the line to take care of UACs(unaccompanied children) and family units, and it becomes much easier for those carrying drugs to enter the country,” Telford said.

It’s not just an issue in the southern region of the U.S. Comeaux told the DCNF the drugs smuggled can go further north.

“Every cartel has their drug routes and their methods of trying to get it all the way up to the east coast to the Midwest and off to the west,” Comeaux said. (RELATED: FACT CHECK: Is The Current Drug Epidemic The ‘Deadliest’ In US History?)

Experts told the DCNF that the Biden administration could work with Mexico’s police, legalize drugs, and address addiction to combat the cartels.

Work With Mexico’s Police And Experts

Poverty on the other side of the border increases criminal activities, Lee University professor Arlie Tagayuna told the DCNF.

“Biden’s administration must carefully coordinate with the Mexican authorities and aid without jeopardizing international jurisdiction. We need to reexamine our policing tactics for would-be traffickers and revisit our MOU (memorandum of understanding) and MOA (memorandum Of agreement) with Mexico,” Tagayuna said. “Despite fences having been built, the illegal drug trade continues to move under (the border).”

Biden must also listen to people who work at the border on a day-to-day basis, Tagayuna told the DCNF. “Just tightening borders and concentrating entry in one area are not enough. It only slows down drug entry.” 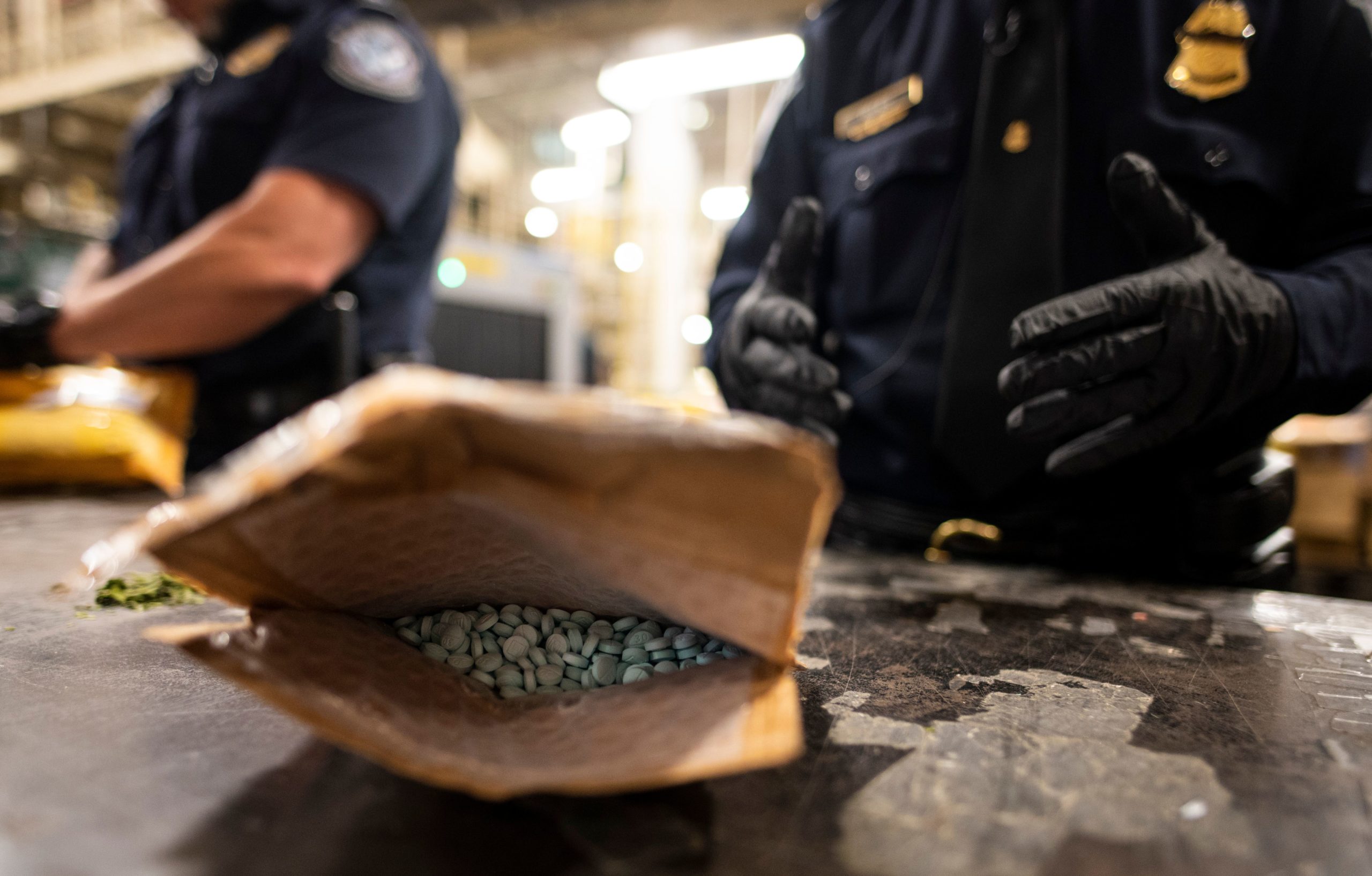 An officer from the US Customs and Border Protection, Trade and Cargo Division finds Oxycodon pills in a parcel at John F. Kennedy Airport’s US Postal Service facility on June 24, 2019, in New York. (JOHANNES EISELE/AFP via Getty Images)

The border patrol officers have a difficult time working in many rural areas that are unfenced or filled with tunnels, Tagayuna told the DCNF.

While many drugs come into the U.S. country at various points of entry, “cartels are now becoming more creative in tapping under policed areas at the border,” Tagayuna said. professor at Lee University Arlie Tagayuna told the Daily Caller News Foundation.

Why Do Americans Want Drugs?

“But we also need to address the demand side here in the U.S. and how it feeds cartels and smugglers to pursue such activities,” Tagayuna told the DCNF. “Without the demand, there will be no supply.”

Biden’s administration needs to invest in aggressive policing at the border and also provide assistance in poverty, mental health, and other social issues that lead to drug addiction in the U.S., Tagayuna told the DCNF.

Another option is to decriminalize drug use and move towards a universal healthcare system that treats “maladies like drug addiction,” Terence Garrett, a politics professor at the University of Texas Rio Grande Valley, told the DCNF.

“The transnational criminal organizations (TCOs) will continue to profit on these victims,” Garrett told the DCNF. He said the cost of war on drugs is not worth all the lives and billions of dollars put on this “intractable problem.”

The U.S. should stop destabilizing democratically elected governments in the Americas, Garrett told the DCNF.

“These efforts keep the TCOs in place – oftentimes displacing democratically elected leaders with right wing profiteers who thrive on their respective population’s misery,” Garrett told the DCNF. “The TCOs would eventually go out of the drug business and all their other illicit activities – human trafficking, petrol-chemical and mineral theft.”

Garrett also said the U.S. maintains the profitability of the TCOs by making illegal drugs scarcer. He says that businesses will continue to turn a blind eye to these issues as long as they keep making money off migrant workers.

As long as cheap migrant labor continues to get through the border other businesses like agriculture will continue to profit from “migrant’s misery” Garrett told the DCNF.

The U.S. has worked with countries like China across the world to stop the production of drugs that eventually are trafficked through the border.

The American government has provided assistance to countries like China to cut the global supply of opioids, as the Chinese government banned fentanyl in April 2019, according to The Council on Foreign Relations. Most fentanyl coming through the border is illegally produced in China, however, some view targeting China as an out-of-date strategy.

Production and transportation of fentanyl are controlled by Mexican drug cartels in collaboration with American street gangs, Todd Bensman, a senior national security fellow at The Center for Immigration Studies, told the DCNF. Cartels have already hired chemists from Mexico’s universities to research how to create fentanyl using other chemicals to not rely on China, Bensman told the DCNF.

“The cartels are a few steps ahead of US thinking, anticipating pressure on China. So any strategy has to target the cartel lab networks, physically,” Bensman told the DCNF. “Mexico won’t go after these labs due to corruption and intimidation by the cartels, the fatal ‘hugs not bullets’ strategy.”

Mexican President Andres Manuel Lopez Obrador pledged to combat drug cartels by reducing extreme poverty in a “abrazos no balazos (hugs not bullets)” strategy, according to the Guardian.

Biden Must Show His Muscles

Former President Donald Trump took an aggressive approach to the drug crisis, he called for the death penalty for fentanyl dealers linked to fatal doses in August 2018.

Trump signed in September 2018 the SUPPORT for Patients and Communities Act, which expanded access to addiction treatment and increased research on alternative pain medications, according to NBC News.

He also declared the opioid epidemic a “public health emergency” in October 2017. This allowed more flexibility with regulations governing how states can spend federal dollars, according to USA Today.

The Biden administration needs to follow a similar path and use “muscular diplomacy” by pressuring Mexico to use its military in coordination with the U.S. to destroy the cartel labs, Bensman told the DCNF.

Biden should follow in the footsteps of Trump when he threatened trade tariffs with Mexico if they didn’t deploy troops on its southern border, Bensman told the DCNF. Bensman said Biden should also force Mexico to accept illegal immigrants that were from the Remain in Mexico policy.

“I don’t see the Biden administration having the cajones for this necessary kind of approach,” Bensman told the DCNF.