Low-income tenants across the country are behind on rent payments because of the pandemic, even as billions of dollars appropriated by Congress to assist renters remain untouched.

About $5.2 billion of the $46.6 billion — roughly 11% — set aside for the Emergency Rental Assistance (ERA) program has been distributed to low-income tenants, according to the most recent data released by the Department of the Treasury on Wednesday. House Financial Services Committee Ranking Member Patrick McHenry characterized the Biden administration’s handling of the ERA program as “gross mismanagement.”

“The record indicates Treasury is largely unable to account for billions of dollars disbursed to grantees,” McHenry said in a June letter to the Government Accountability Office requesting an oversight investigation into the administration’s handling of the ERA program.

While states such as Virginia and Texas distributed some rental assistance, other states continue to expose tenants in need of the assistance to eviction in light of the Supreme Court decision. The majority of states have paid out less than 14% of the funds received in December, Treasury data showed.

The White House blamed states for the lag in ERA distribution to the low-income renters the program intends to help. The federal government gave out $25 billion, the maximum it could under the December stimulus package, and it made 40% of the $21.6 billion appropriated in the March American Rescue Plan available to states, a Treasury spokesperson told the Daily Caller News Foundation (DCNF).

More than 12 million U.S. tenants have little to no confidence in being able to make their next rent payment, according to a recent Census Bureau survey. Nearly eight million households are already behind on rent. 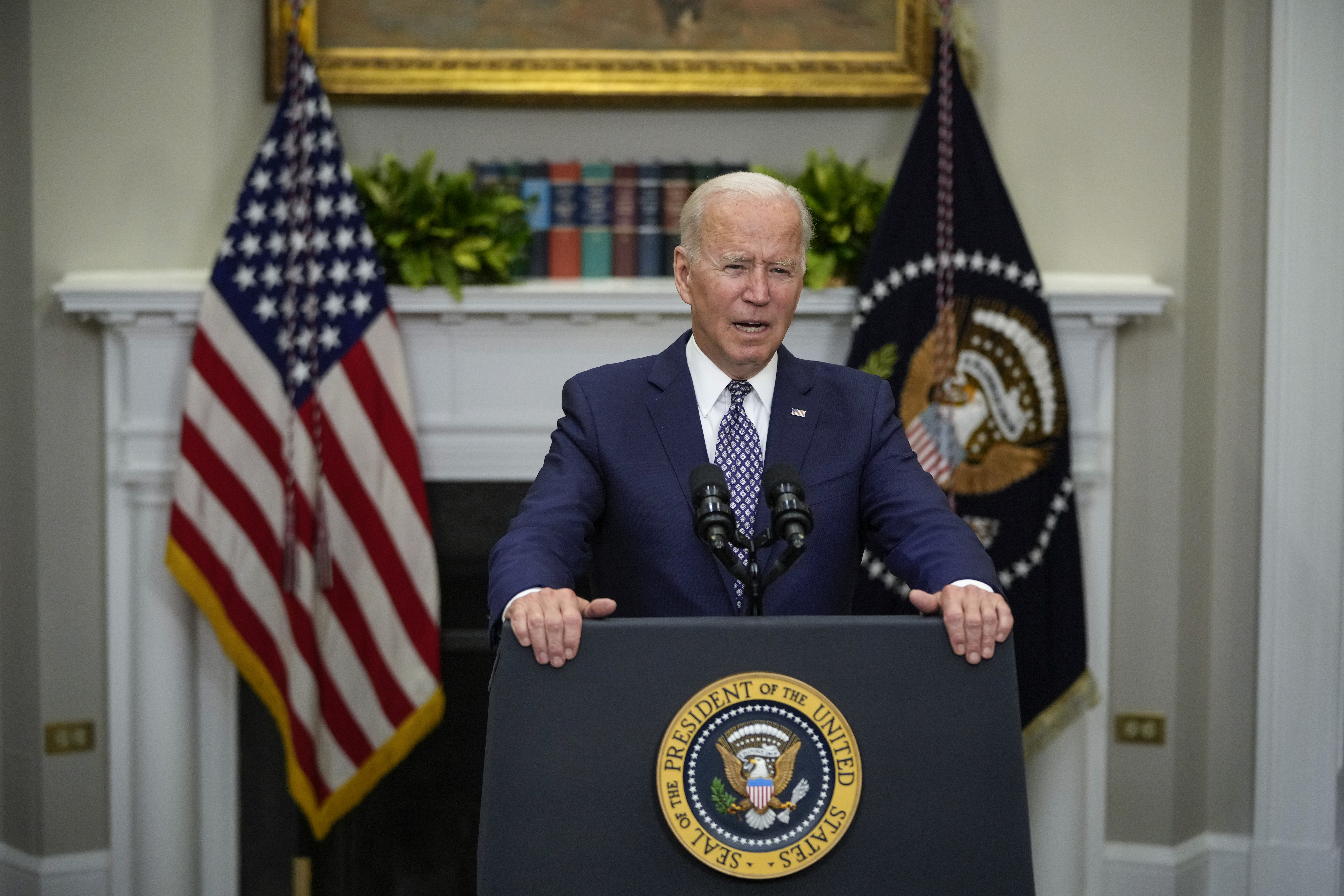 ‘Never been done by our department before’

Many state officials acknowledged delays in distributing the funds, saying they were unprepared to handle such large sums of money. Ensuring money is disbursed properly and approving tenants also slowed down the process, states said.

“Developing and implementing a program of this magnitude has never been done by our department before,” Connecticut Department of Housing spokesperson Aaron Turner told the DCNF. “Continuing outreach to residents who may be eligible, and then the process to make sure everything is accurate has required sending the application back to landlords or tenants which increase turnaround time.”

Connecticut made progress in recent months — the Treasury’s latest update showed that the state paid out $45.5 million to ERA applicants. Connecticut has now distributed around $58 million of the roughly $236 million in ERA funds awarded, according to Turner. (RELATED: ‘Not The Answer’: Landlords Slam Biden’s Eviction Moratorium Extension, Ask Federal Court To Intervene)

The Treasury Department has continued to release new guidance to help states efficiently manage ERA distribution. South Carolina officials credited the new recommendations, explaining how states could meet requirements for approving applicants without getting bogged down in paperwork, with helping the state to give funds out to those in need. 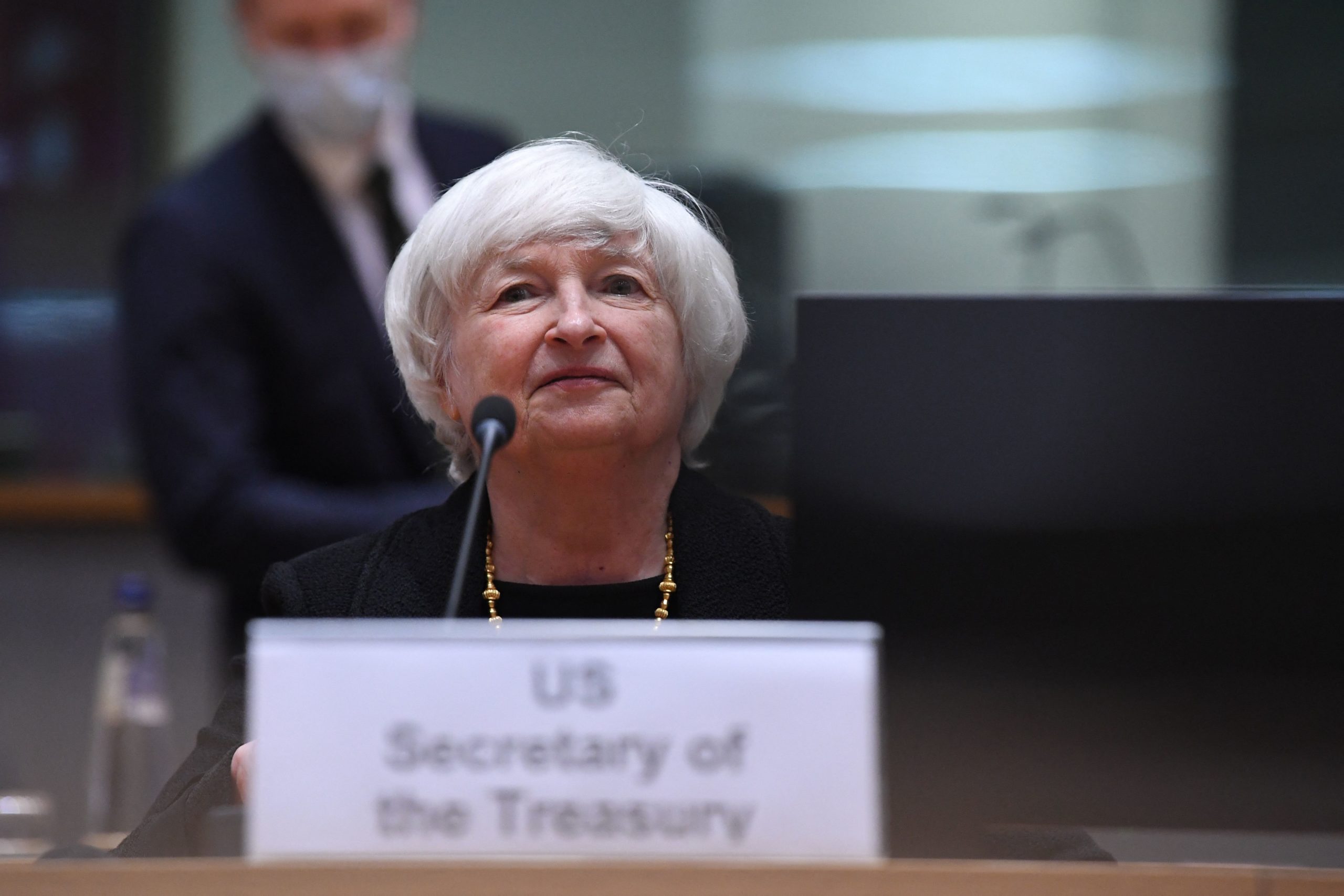 The federal government published a series of requirements for states to use to determine whether a person or family is eligible for rental assistance, a process hampering some states’ processing capabilities. States are expected to “apply reasonable fraud-prevention procedures” to ensure that money is used for rent or utilities, but they aren’t required to obtain documentation proving a permissible use of funds.

Groups representing landlords, including the National Association of Realtors, advocated for a rental assistance program that pays landlords directly — rather than indirectly, by the government paying tenants. (RELATED: Biden Admin Announces New Efforts To Expand Eviction Moratorium Amid Fight Between Congress, White House)

“NAR has always advocated the best solution for all parties was rental assistance paid directly to housing providers to cover the rent and utilities of any vulnerable tenants during the pandemic,” NAR spokesperson Patrick Newton previously told the DCNF. “No housing provider wants to evict a tenant and considers it only as a last resort.”

Landlords are owed some amount between $8.4 billion and $52.6 billion in back-rent which piled up during the pandemic, according to differing estimates. Tenants will be required to pay all back-rent accrued after the moratorium expires on October 3. 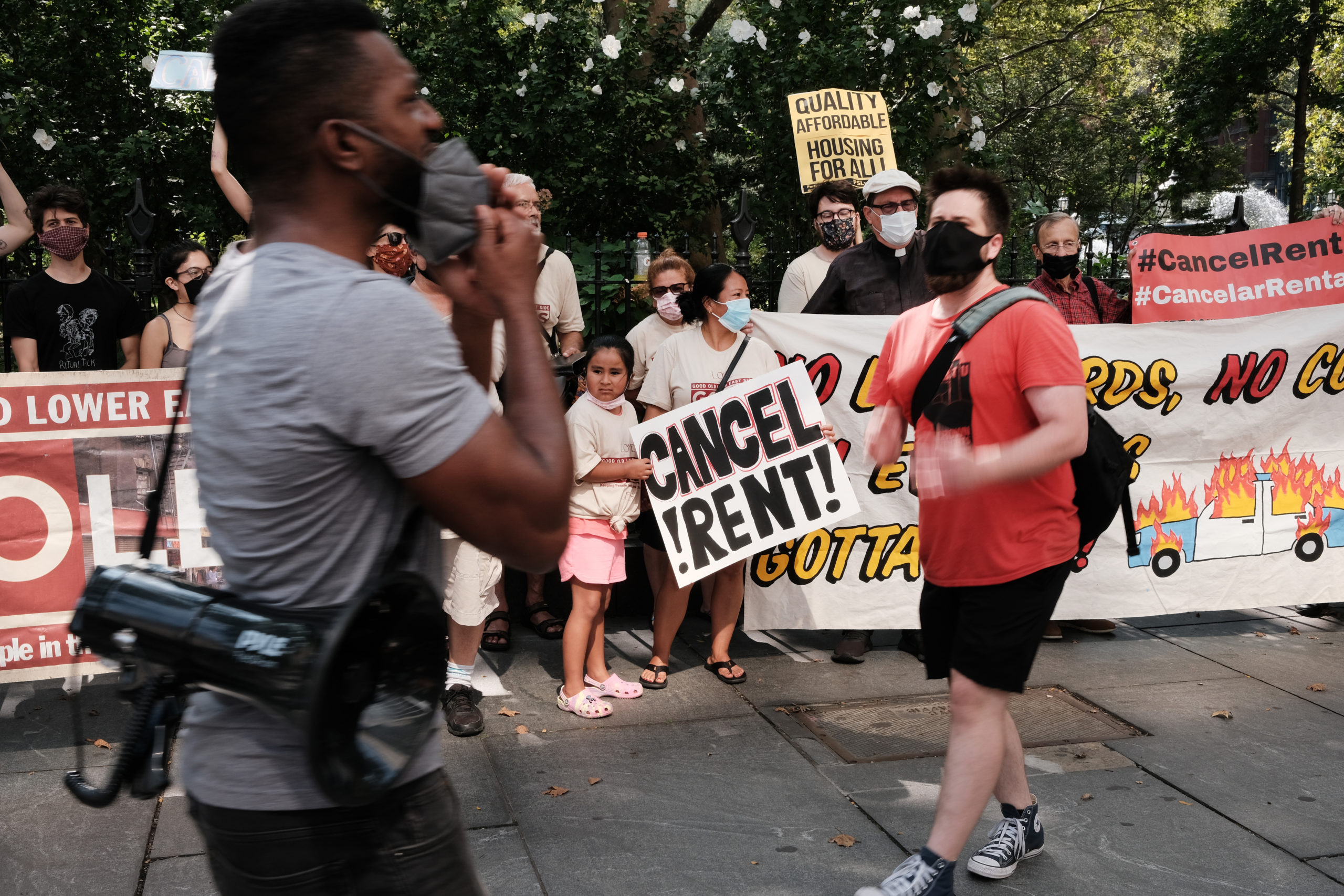 Activists hold a protest against evictions near on Aug. 11 in New York City. (Spencer Platt/Getty Images)

‘Did not have an existing ERA program’

“One challenge we have seen at SC Housing is getting ALL of the requested documentation submitted by the tenant,” South Carolina State Housing Finance and Development Authority spokesperson Chris Winston told DCNF in an email. “We have approved a large number of the completed applications we’ve received.”

Among all states, South Carolina sat furthest behind when the Treasury Department reported data in July, having distributed just $36,096 — less than 1% — of the $271.8 million in ERA funds received in June. The state disbursed $25.5 million as of July 31, according to the Treasury data published Wednesday.

South Carolina was also later, among the states, to establish a program to handle the funds, Winston added. Gov. Henry McMaster signed legislation enacting the program in mid-April. 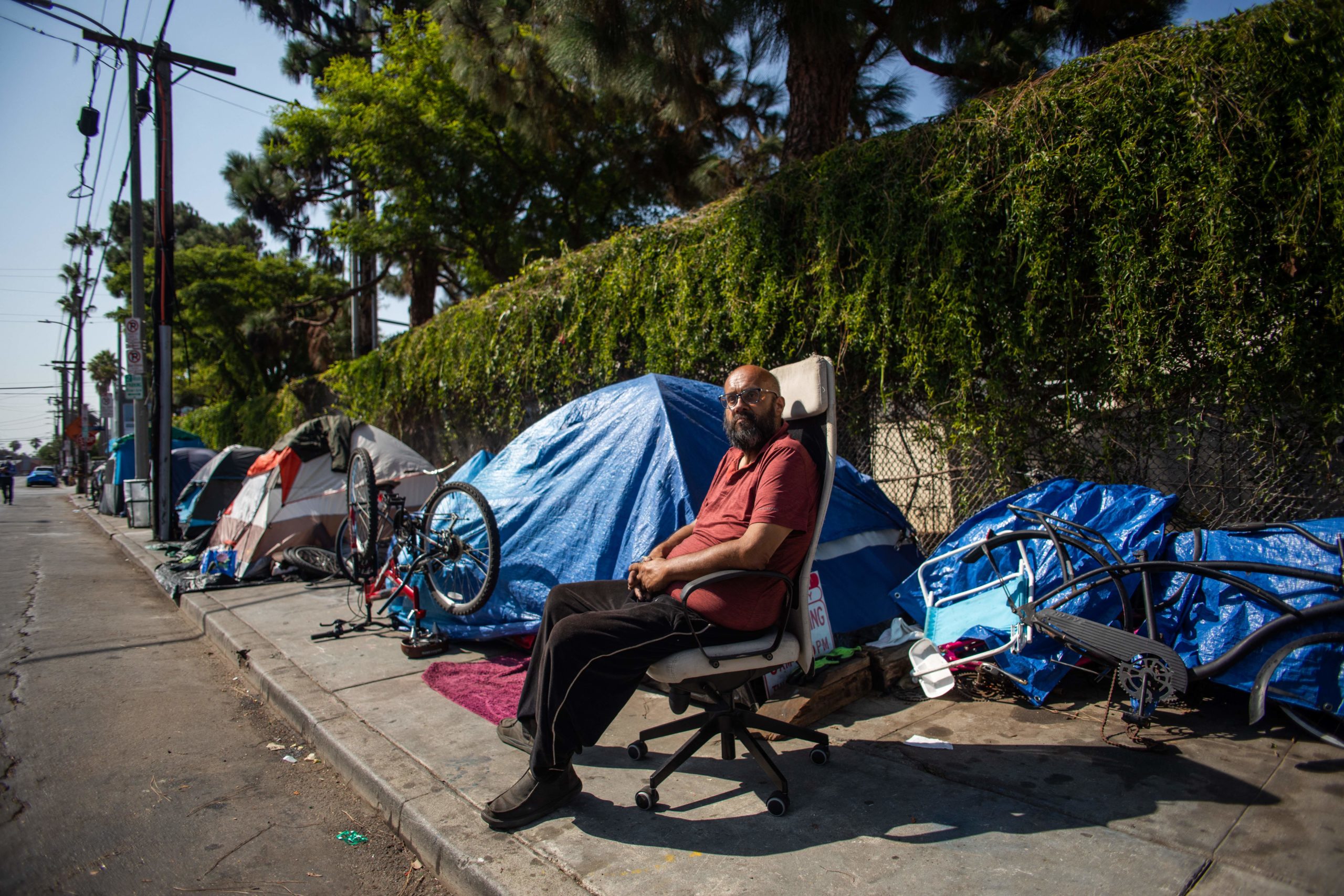 A homeless man sits outside his tent on a sidewalk in Venice Beach, California on Aug. 12. (Apu Gomes/AFP via Getty Images)

“Wyoming did not have an existing ERA program and has stood-up a new program in four months that we continue to refine as we learn more about how to most efficiently and effectively administer the program,” Rachel Girt, a spokesperson for the Wyoming Department of Family Services, told the DCNF.

“We are also attempting to give applicants every opportunity to succeed in the program,” she continued. “For example, we are sending back applications for additional information rather than denying them as incomplete, which contributes to longer processing times.” (RELATED: Top Republican Demands Janet Yellen Testifies About $44 Billion In Unused COVID Funds)

Arkansas initiated its program on May 17, even later than other states, according to Amy Webb, a spokesperson for the Arkansas Department of Human Services, who said the state is now “aggressively” working to get the money out. Arkansas, which hired third-party consultants to run the program, has distributed $5.1 million of the $173.7 million the federal government gave to the state.

‘Not built for the level of demand’

“As it may be the case for other states, the infrastructure for processing rental assistance in Colorado was not built for the level of demand for pandemic-related emergency assistance,” Colorado Department of Local Affairs spokesperson Brett McPherson told the DCNF. “The Division of Housing has worked feverishly across the last 18 months to provide the relief while also protecting against fraud and meeting the stringent federal requirements that are necessary to approve payments.”

Colorado has approved or distributed $147.6 million of the $247.8 million given to the state for the ERA program.

Indiana designed its program to allow tenants to use funds for both rent and utilities, complicating and slowing down the state’s ability to process applications. The state has distributed $68.6 million of its total $371 million in ERA funds. 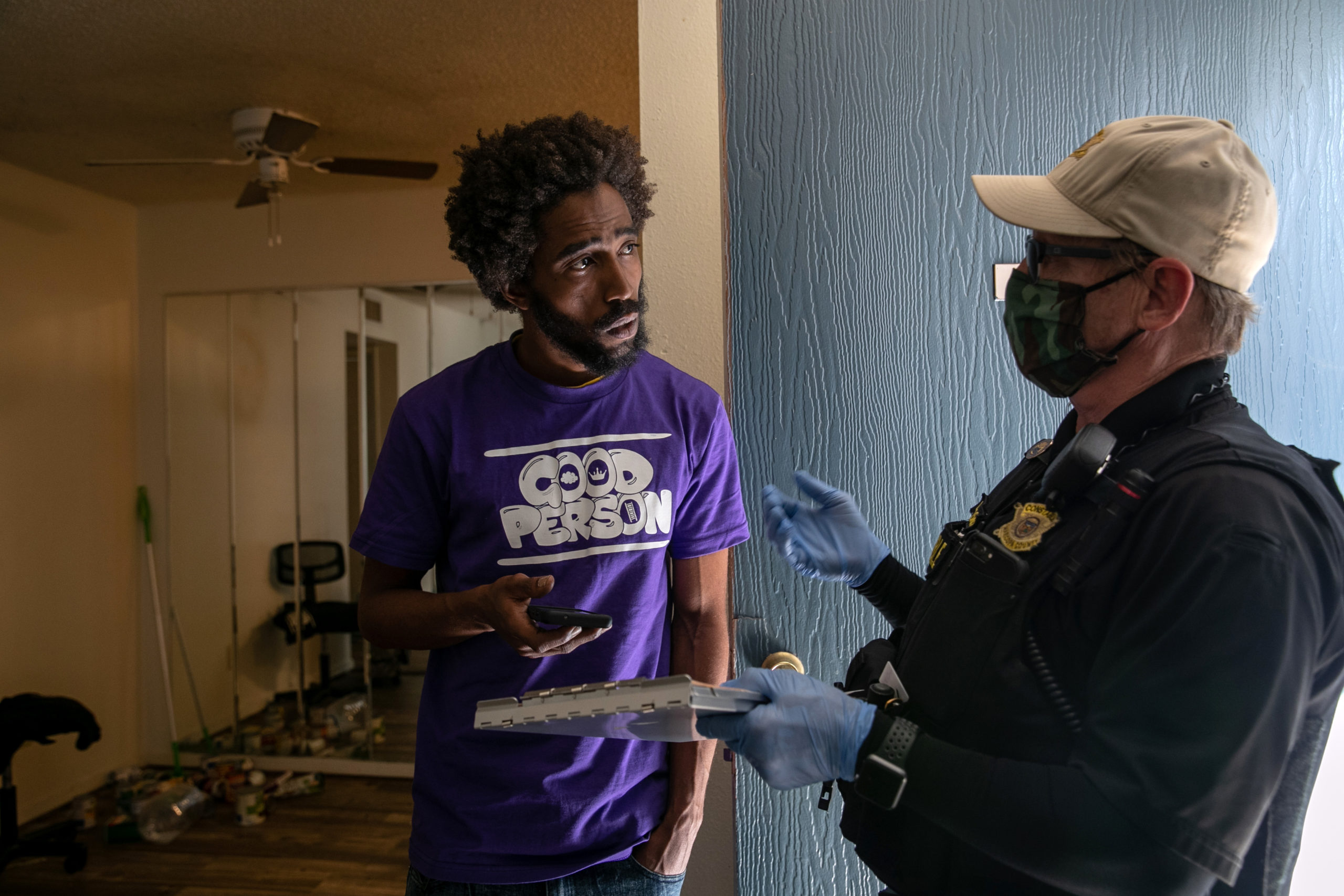 A police officer serves an eviction order to a delinquent tenant in October 2020 in Phoenix, Arizona. (John Moore/Getty Images)

“When we designed our program, we wanted to provide as much assistance as possible to ensure housing stability for Hoosiers,” Lauren Houck, a spokesperson for the Indiana Housing and Community Development Authority (IHCDA), told the DCNF.

“This program is unlike anything IHCDA has ever had to administer,” she added. (RELATED: Appeals Court Upholds Eviction Moratorium, Setting Up Potential Supreme Court Review)

California has disbursed $587.2 million of the $2.6 billion it received for the program, the largest allocation of federal rental assistance funds given to any single state, according to the Treasury Department. California tenants have requested nearly $1.3 billion in assistance.

Georgia, also the recipient of a large allocation, awarded low-income renters just $20 million of the $552 million in ERA funds given to the state, said Georgia Department of Community Affairs spokesperson Kaley Volkmann.

“The speed at which funds are administered has increased and we expect this to continue as we have implemented updates to the online portal to further streamline the process and experience for applicants,” Volkmann added.