Former President Donald Trump lambasted Gen. Mark Milley as a “dumbass” but denied reports from Bob Woodward that the general had secretly met with Chinese military officials out of fear that Trump would start a war with the country.

Woodward’s new book alleges, according to the Washington Post, that Milley feared Trump might start a war with China, so he reached out to his Chinese counterpart and assured him that he would warn of any incoming attack. It also claims that Milley took action to limit Trump’s ability to order a nuclear strike following Jan. 6, when the president’s supporters stormed the U.S. Capitol.

Trump derided the report as fake news, but said it would be “treason” if true. (RELATED: Gen. Milley Allegedly Took Secret Action To Prevent Trump From Using Nuclear Weapons)

“If the story of ‘Dumbass’ General Mark Milley, the same failed leader who engineered the worst withdrawal from a country, Afghanistan, in U.S. history, leaving behind many dead and wounded soldiers, many American citizens, and $85 Billion worth of the newest and most sophisticated Military equipment in the world, and our Country’s reputation, is true, then I assume he would be tried for TREASON in that he would have been dealing with his Chinese counterpart behind the President’s back and telling China that he would be giving them notification ‘of an attack,'” Trump’s statement began. “Can’t do that!” 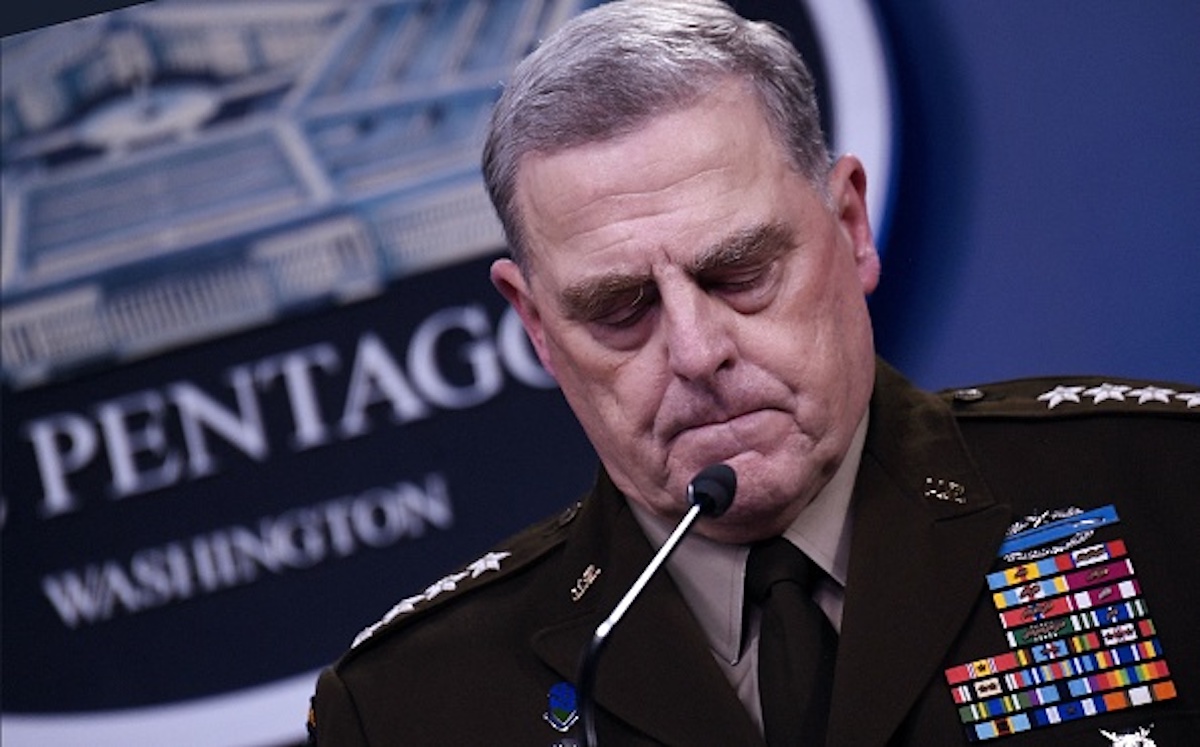 Chairman of the Joint Chiefs of Staff, General Mark Milley, speaks during a press conference about the situation in Afghanistan on August 18, 2021, at The Pentagon in Washington, DC. – Austin said Wednesday that US forces would evacuate as many people as possible from the Kabul airport as thousands pressed to leave after the Taliban takeover of the country. (OLIVIER DOULIERY/AFP via Getty Images)

“The good news is that the story is Fake News concocted by a weak and ineffective General together with two authors who I refused to give an interview to because they write fiction, not fact. Actions should be taken immediately against Milley, and better generals in our Military, of which we have many, should get involved so that another Afghanistan disaster never happens again. Remember, I was the one who took out 100% of the ISIS Caliphate. Milley said it couldn’t be done,” he added.

Trump went on to deny that he ever thought of attacking China at any point in his presidency. Milley allegedly held phone calls with his Chinese counterpart and assured him that any U.S. attack would not be “a surprise.”

“You and I have known each other for now five years. If we’re going to attack, I’m going to call you ahead of time. It’s not going to be a surprise.” (RELATED: Gen. Milley Allegedly Promised To Warn China In Case US Prepared Military Strike)

Two days after Jan. 6, he also reportedly instructed senior military officials not to carry out any order for a nuclear strike without clearing it with him first. He also reportedly discussed the safety of the nuclear arsenal with House Speaker Nancy Pelosi.

Republicans have opened fire on Milley over the the report, though it remains unconfirmed. Republican Florida Sen. Marco Rubio called on President Joe Biden to fire Milley immediately on Tuesday.