Renewable energy prices have skyrocketed while new wind and solar installations have plummeted over the last year, even as governments continue to forge ahead with ambitious climate plans.

While the U.S., European Union, other Western nations and international organizations have all pursued aggressive climate agendas that involve expanding renewable energy technology and infrastructure, prices have surged and profits have declined, according to industry reports and corporate earnings reviewed by the Daily Caller News Foundation. President Joe Biden has made a series of climate pledges, including a commitment to decarbonize the grid by 2035 and achieve net-zero economy-wide emissions by 2050, while pushing a long list of anti-fossil fuel policies.

Commodity markets tied to global renewable energy development have been roiled by inflation, supply chain issues stemming from the COVID-19 pandemic and, more recently, Russia’s invasion of Ukraine. Even as project demand has stayed high, industry profitability has declined because of these factors.

“One of the problems with this industry as a whole is that, since at its very foundation it is based on government subsidies and government mandates, its market value is never truly known,” Daniel Turner, the executive director of Power the Future, told the DCNF in an interview.

“It’s a big lie when the environmentalists say, ‘it’s cheap’ — we don’t know what it actually costs,” Turner continued. “It may be, I’m not denying it could be, but the fact is we don’t actually know what wind and solar cost.” (RELATED: Consumers Set To Get Crushed As Energy Utilities Switch To Solar, Wind)

The average price for renewable energy technology in North America increased an “astounding” 28.5% between early 2021 and early 2022, according to an April 13 report from renewable industry marketplace LevelTen Energy. Development costs, supply chain issues and market uncertainty are to blame for the setback even as demand for green energy climbed, the report added.

In addition, wind and solar project completions in the U.S. have plummeted over the last two years with the total investment value of such projects falling from $46.2 billion in 2019 to $7.5 billion in 2021, an Industrial Info Resources report published on April 21 showed. In that same time span, the number of wind and solar project completions has decreased from 240 to just 66, a 73% decline.

“Difficulty in obtaining financing, regulatory challenges, or a shortage of available capacity on the transmission grid are three longstanding challenges to getting renewable generation built,” Industrial Info Resources Vice President of Research for the Global Power Industry Britt Burt said in a statement.

“As long as these myriad headwinds persist, we can expect elevated [prices] across North America,” Gia Clark, a senior director at LevelTen Energy, said earlier in April. 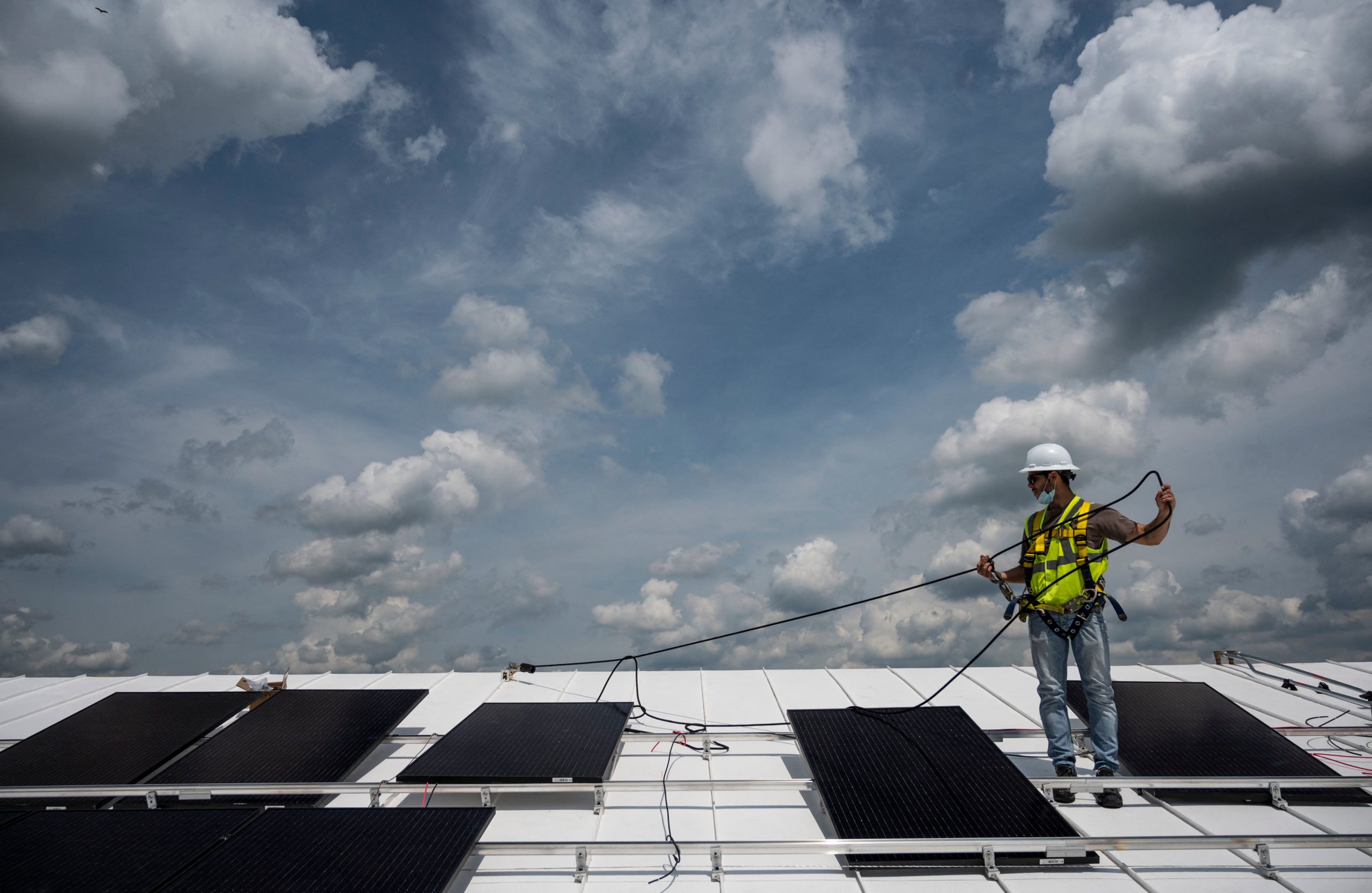 A worker installs solar panels on the roof of a church in Alexandria, Virginia on May 17. (Andrew Caballero-Reynolds/AFP via Getty Images)

‘The Industry Must Become More Profitable’

New industrial solar panel installations, which are needed to drive the transition away from fossil fuel dependence, are set to decrease by 14% in the U.S., the Solar Energy Industries Association said in a report published alongside research firm Wood Mackenzie in March. Utility solar projects experienced an 18% price increase last year thanks to inflation and supply chain problems, the report showed.

For example, JinkoSolar, one of the world’s largest solar panel makers, reported a 41.7% year-over-year decrease in profit in 2021 even as shipments increased 34.5%. The world’s largest solar company, Longi Green Energy Technology, suggested that its profits would decline in 2022 due to increasing electricity costs, Bloomberg reported earlier in April.

Global wind project completions, meanwhile, declined 1.8% between 2020 and 2021 — falling 20% in China and 4.2% in the U.S. during that period — and they are expected to fall far short of the goals the industry must hit to ensure a green transition over the next decade, according to the Global Wind Energy Council’s 2022 annual outlook. The group said the wind industry is “not growing nearly fast or widely enough.”

“For renewable energy to progress and provide the energy solutions for today and tomorrow, the industry must become more profitable,” Vestas Chairman Bert Nordberg and CEO Henrik Andersen wrote to investors in February. “In 2021, the impact of COVID-19, in particular the increasing costs of raw materials and logistics, dented profitability across the industry.”

Leading renewable energy groups, large solar and wind companies and politicians have supported lavish subsidies and credits for green tech. In the U.S., Democrats have pushed for an additional $100 billion in renewable energy subsidies over the next decade as part of the Build Back Better Act. (RELATED: Energy Prices Set To Skyrocket Further As Biden Diverts More Natural Gas To Europe)

“The whole thing has been sort of a government created industry, from the get go,” Dan Kish, a senior fellow at the Institute for Energy Research, told the DCNF in an interview. 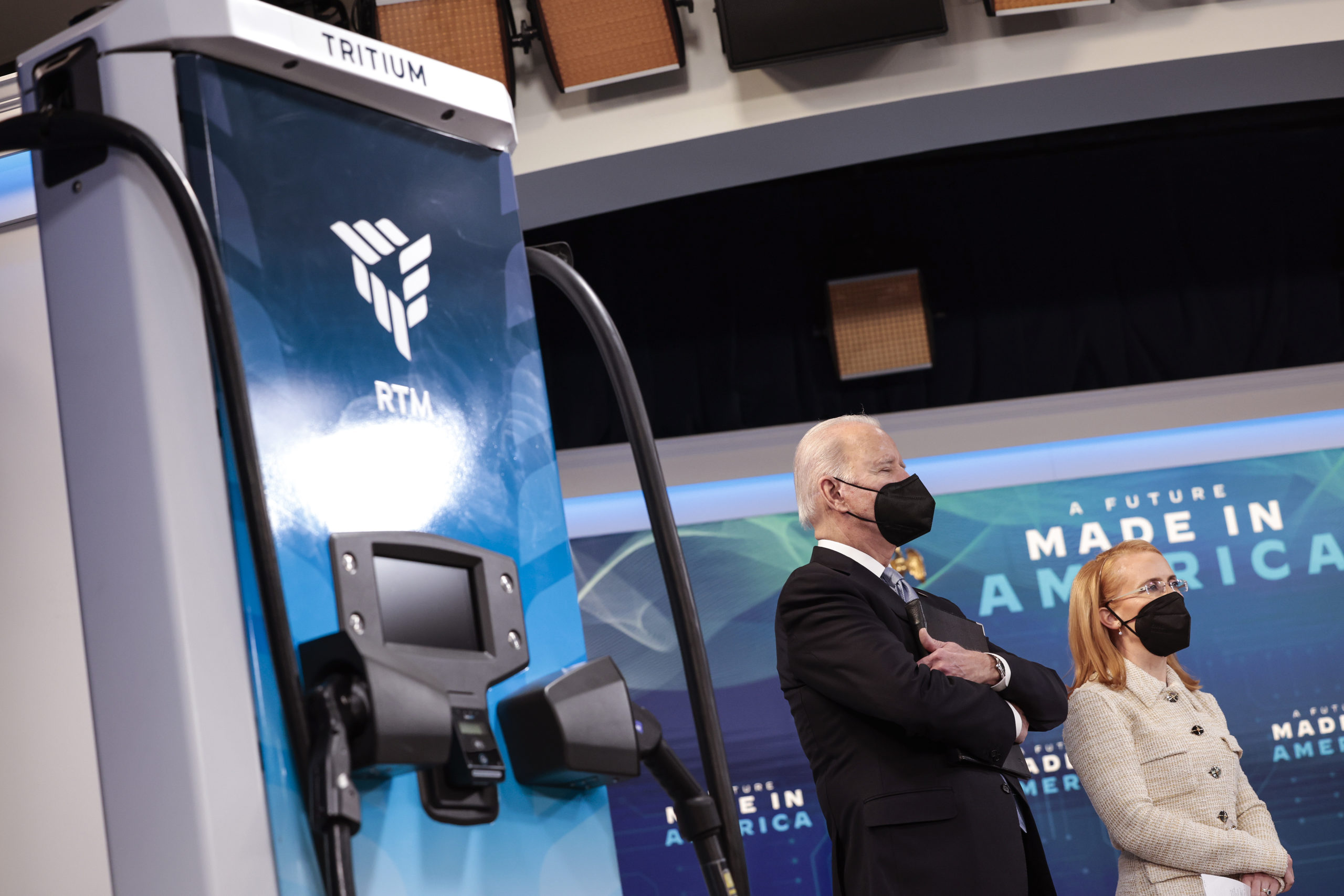 President Joe Biden stands next to an electric vehicle charger on Feb. 8 at the White House. (Anna Moneymaker/Getty Images)

‘The Supply Chain Does Not Exist’

While proponents of renewables — including President Biden, top White House officials and Democratic lawmakers — have suggested that Russia’s invasion of Ukraine has shown the foolishness of relying on fossil fuels, the crisis has also roiled green tech. Renewable technology such as wind turbines, solar panels, industrial-scale battery storage and electric vehicles require a wide range of critical minerals sourced from around the world.

Russia, China and other hostile nations control most of the global critical mineral supply chain, according to a 2021 White House report on supply chains. Following the invasion of Ukraine, the price of nickel surged more than 100%, reaching $100,000 per metric ton because of the threat of sanctions on Russian commodity markets.

“The media hasn’t covered the cost of nickel, cobalt, aluminum, manganese or lithium,” Kish told the DCNF. “Lithium batteries, for example — if you want to call gasoline the fuel of internal combustion engines, lithium is the fuel of electric vehicles.”

Meanwhile, the head of leading electric vehicle manufacturer Rivian warned that building out the battery supply chain — which includes mining and refining minerals, and assembling costly battery packs — remains a massive hurdle for the industry as governments push increasingly aggressive transition policies, The Wall Street Journal reported. For instance, Biden has promised to craft policies to ensure 50% of new vehicle sales in the U.S. are emissions-free by 2030 and every addition to the federal government’s 600,000-vehicle fleet is electric by 2035.

“Put very simply, all the world’s cell production combined represents well under 10% of what we will need in 10 years,” RJ Scaringe, Rivian’s CEO, told reporters in April, according to the WSJ. “Meaning, 90% to 95% of the supply chain does not exist.”

Kish noted that the price of lithium has risen 1,000% over the last two years.