Pro-life groups are celebrating the Trump administration’s decision to cut funding for research involving the use of aborted fetal tissue.

The Department of Health and Human Services (HHS) announced Wednesday that they are canceling a contract with the University of California, San Francisco (UCSF) that provides funds for research with fetal tissue procured from elective abortions. The HHS is also discontinuing “intramural” research within the National Institutes of Health (NIH) using aborted fetal tissue. (RELATED: Trump Cancels Government Contract For Fetal Tissue Research)

Pro-life groups, including the Susan B. Anthony List and the March for Life, immediately released statements in support of the administration’s move.

“This is major pro-life victory and we thank President Trump for decisive action,” Marjorie Jones Dannenfelser, the president of Susan B. Anthony list, said. “It is outrageous and disgusting that we have been complicit, through our taxpayer dollars, in the experimentation using baby body parts.”

Jeanne Mancini, the president of March for Life, echoed those sentiments, stating:

March for Life applauds the Administration for halting funding for research that requires aborted fetal organs and tissue. Most Americans do not want their tax dollars creating a marketplace for aborted baby body parts which are then implanted into mice and used for experimentation. This type of research involves the gross violation of basic human rights and certainly the government has no business funding it. 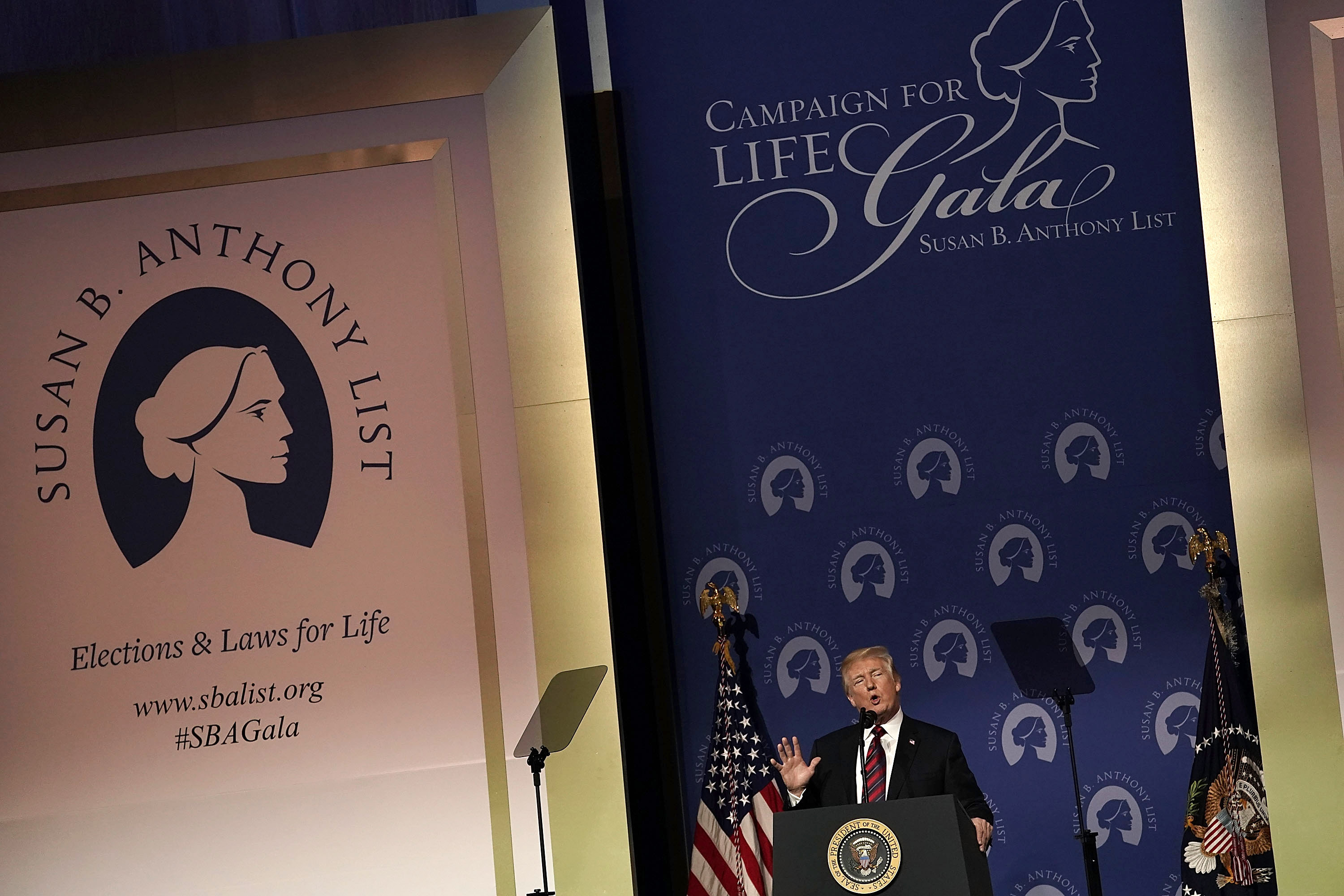 WASHINGTON, DC – MAY 22: U.S. President Donald Trump speaks during the Susan B. Anthony List’s 11th annual Campaign for Life Gala at the National Building Museum May 22, 2018 in Washington, DC. President Trump addressed the annual gala of the anti-abortion group and urged people to vote in the midterm election. (Photo by Alex Wong/Getty Images)

Scientists with the Charlotte Lozier Institute (CLI), the research arm of SBL, disputed critics who claim aborted fetal tissue is vital to research for the treatment of serious diseases. Researchers in favor of the practice claim the use of “humanized mice” — mice given humanlike immune systems using fetal tissues — can eventually provide cures for HIV, eye disease, cancer, and other illnesses.

Dr. David Prentice of CLI, an expert in stem cell research, said during a press call with reporters that “there has not been a single successful report of using aborted fetal tissue to treat any disease.”

Prentice and Dr. Tara Sandra Lee of CLI both stressed that they view the Trump administration’s decision as a “preliminary step” in preventing the use of aborted fetal tissue in scientific research. They pointed to the millions of dollars in “extramural” funding for the practice, which essentially refers to federal grants given to universities to conduct such research. Prentice also noted that federal funding of research with aborted fetal tissue was banned by law between 1988 and 1993.
“It is utterly dehumanizing to use a preborn human being as raw material for scientific experiments,” Maureen Ferguson, senior fellow for The Catholic Association, said of the Trump administration’s decision. “And it is wholly inappropriate for taxpayers to support such unethical research.”