Democratic Massachusetts Sen. Elizabeth Warren received the most speaking time at the latest Democratic debate Tuesday, but with her newfound frontrunner status, she was also forced to endure a litany of attacks from her opponents.

Warren has consistently been the highest polling Democratic candidate in the 2020 race since September, when she overtook former Vice President Joe Biden in a national Quinnipiac Poll. The senator and former law professor later pulled ahead of Biden in the national polling average from RealClearPolitics in October amid Biden’s scandal involving his son’s business dealings in Ukraine. (RELATED: Warren Pulls Ahead Of Biden In Polling Average)

Before even entering the debate, a third of Democratic primary voters predicted that Warren would preform the best among all of the candidates.

Warren’s success has clearly put a target on her back, making the senator the center of relentless barbs from other candidates on issues ranging from health care to the economy.

Warren supports a medicare-for-all system similar to that of Independent Vermont Sen. Bernie Sanders, which would eliminate private insurance and cost approximately $30 trillion over ten years. Warren has repeatedly refused to say if she will raise middle class taxes to pay for her plan, instead dodging by insisting overall “costs” would go down for middle class families.

South Bend Mayor Pete Buttigieg used Warren’s plan to eliminate private insurance as a window of attack, noting that the idea is wildly unpopular among Americans, who overwhelmingly like their current insurance plans.

“It is better to have medicare for all who want it” than to force a government system on Americans, Buttigieg asserted.

Other Democrats took shots at the fact that Warren could not say who would pay for her plan, including her supposed ally, Sanders.

“It is appropriate to acknowledge that taxes will go up,” Sanders said in response to Warren’s waffling.

Minnesota Sen. Amy Klobuchar agreed that “at least Bernie is being honest” about tax increases, and smacked Warren for a “pipe dream” on health care and for providing talking points to Republicans by advocating for medicare-for-all. 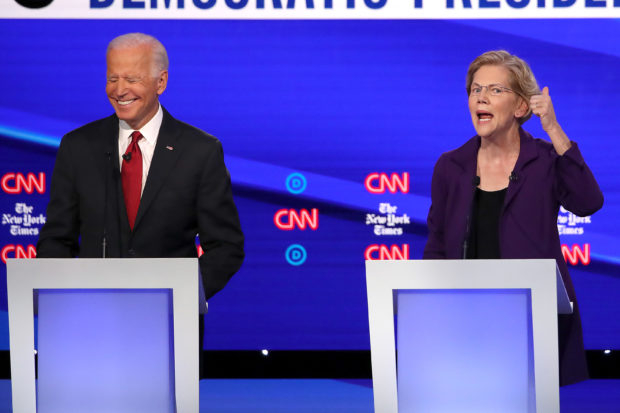 The health care fight came full circle toward the end of the debate when Biden slammed the vision of left-wing progressives like Sanders and Warren, and asserted that Warren was being “vague” about her plan by refusing to admit that taxes would increase in order to pay for the proposal.

“We all have good ideas,” Biden said. “Tell people what it’s gonna cost.”

Warren faced the wrath of her opponents again when she downplayed the rise of automation and the loss of manufacturing jobs, insisting that the main threat to jobs is bad trade policy and the selfish interests of large corporations. Entrepreneur Andrew Yang shot back by accusing Warren of ignoring the reality of job loss for manufacturing employees.

Yang went after Warren again for her wealth tax, calling it a “good idea” but noting that every other country that has tried a similar proposal repealed it because of problems with implementation and that the policy didn’t generate as much revenue as much as they hoped. Instead, Yang suggested a value-added tax.

Former Texas Rep. Beto O’Rourke joined the pile-on, calling Warren “punitive” for her plan to tax wealth and accusing her of having a “beef with billionaires.” (RELATED: Beto Tears Into ‘Punitive’ Warren At Democratic Debate)

“Sometimes Warren is more focused on pitting people against one another,” than bringing people together,” O’Rourke declared.

Warren’s only response was to claim that she does not have a “beef” with billionaires, but went on to explain why she thinks mass concentrations of wealth are, in fact, immoral.

Some candidates on the stage expressed support for the mandatory buyback of “assault weapons,” most notably O’Rourke, who vaguely claimed there would be “consequences” for Americans who refused to turn their guns over to the government. Warren, however, broke from the crowd, arguing that buybacks should not be mandatory. She also spoke beyond mass shootings when addressing the gun violence problem, noting that the vast majority of gun deaths are the results of suicides, domestic violence incidents, and other categories. 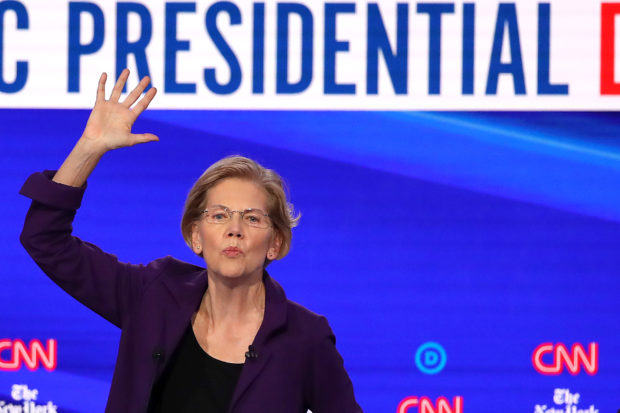 WESTERVILLE, OHIO – OCTOBER 15: Sen. Elizabeth Warren (D-MA) speaks during the Democratic Presidential Debate at Otterbein University on October 15, 2019 in Westerville, Ohio. A record 12 presidential hopefuls are participating in the debate hosted by CNN and The New York Times. (Photo by Win McNamee/Getty Images)

Warren’s refusal to back mandatory buybacks drew the ire of California Sen. Kamala Harris, who suggested Warren was downplaying a “serious matter” and that buybacks must be mandatory because the prevalence of guns in America.

Warren has released arguably the most aggressive plan against large technology companies like Amazon and Facebook, vowing to break them up if she becomes president in order to increase competition within the industry. Yang, perhaps the most qualified candidate on the stage to speak about tech issues, told Warren that her plan to break up tech companies would not revive main street businesses.

“It’s not like any of us wants to use the fourth-best navigation app — that would be cruel and unusual punishment. There is a reason why no one is using Bing today. Sorry, Microsoft. It’s true. It’s not like breaking up these big tech companies will revive Main Street businesses around the country,” Yang said. “We have to hone in on the specific problems we’re trying to solve and use 21st-century solutions for 21st-century problems. Using a 20th-century antitrust framework will not work. We need new solutions and a new tool kit.”

Yang also added that competition “doesn’t solve all of the problems” surrounding tech companies, particularly their use of data and the level of access that children have to the internet. (RELATED: Yang: Breaking Up Big Tech Will Not Revive Main Street)

One of the testiest moments of the night occurred when Harris demanded Warren agree with her position that President Donald Trump’s account be suspended from Twitter. Warren essentially slapped down the idea as a distraction from her larger plan to trust bust the tech companies.

Warren’s most successful counter punch of the night was against Biden, who tried to claim he was “the only one on this stage that’s gotten anything really big done.” Warren shot back by pointing out that she was able to create the Consumer Financial Protection Bureau (CFPB) during the start of the Obama administration.

Biden argued that he lobbied on behalf of the CFPB and said Warren did a “good job” spearheading the project. Warren responded with an assertive “thank you,” followed by a pause that earned laughter and cheers from the audience.

While Warren appeared to regain her footing toward the end of the debate after deflecting the series of attacks, she still has a lot to answer about the viability and cost of her numerous plans. It doesn’t help that the questions are now coming from her own party.