NBC News has gotten itself into a pickle over the word “pizzazz.”

The network deserves to be waterboarded for far more — Matt Lauer and Harvey Weinstein to name a few — but for today, the use of the word “pizzazz” to describe what the impeachment hearings have lacked so far is enough to get people riled.

Longtime Washington reporter Jonathan Allen, who worked for Rep. Debbie Wasserman Schultz‘s (D-Fla.)  political action committee back in 2010 for 40 days, wrote the story that accompanied the tweet. His lede: “It was substantive, but it wasn’t dramatic.” The word “pizzazz” is nowhere to be found in his piece.

To be honest, pizzazz is a kind of snazzy word. I like it.

But top name journalists say the network NBC News has no business turning itself into the Kim Kardashian of news observers (yeah, she’s doing serious stuff with prison reform these days, but she’s still Kim K and observers pay far more attention to her derriere than they do her advocacy skills). (RELATED: Kim Kardashian Wants To Take Greta Thunberg To Dinner)

James Fallows, a longtime Washington journalist and author who worked for The Atlantic, remarked, “FWIW, my ‘analysis’: What we don’t need: a journalist’s guess about ‘how this played.’ What we do need: reportage of who said what, how it was backed up, what was new, how it matches the records and the law.”

In other words, journalism?

Fallows also pointed to a line in NBC’s story that talked about the impeachment hearing as though it should have resembled Mama Mia! “The first round felt more like a dress rehearsal for a serious one-act play than opening night for a hit Broadway musical.”

Andrew Weinstein, a former President Obama White House appointee who chairs The Democrats Lawyers Council, added in his two cents: “Hey NBC News — it looks like someone might have hacked your account and posted a ridiculous tweet suggesting that the impeachment hearings weren’t thrilling enough for people to pay attention to them. Just thought you’d want to know.”

“And what we really don’t need is journalists commenting on whether they thought it was exciting enough,” she snapped. “If you are bored watching an historic impeachment hearing, guys get a new job.”

To be fair to everyone who endured Day 1, the hearing was migraine-inducing boring. A political journalist pal wrote me in the morning, saying,”Everyone is ugly. They should’ve hired actors to perform this instead. I can’t keep my attention focused on these ugly people. If someone doesn’t start having a visible breakdown soon I’m turning it off.”

I replied, “We have become conditioned to watching a high drama show. This is some seriously boring shit.”

Reuters White House correspondents Jeff Mason and Patricia Zengerle also wrote a story on how boring the impeachment hearing has been so far. Like NBC News, the reporters got a raft of shit for it. The headline for his piece: “Consequential, but dull: Trump impeachment hearings begin without a bang.”

Vox‘s liberal journo Aaron Rupar was appalled with the story’s lede. “This really your lede from today?” he asked. 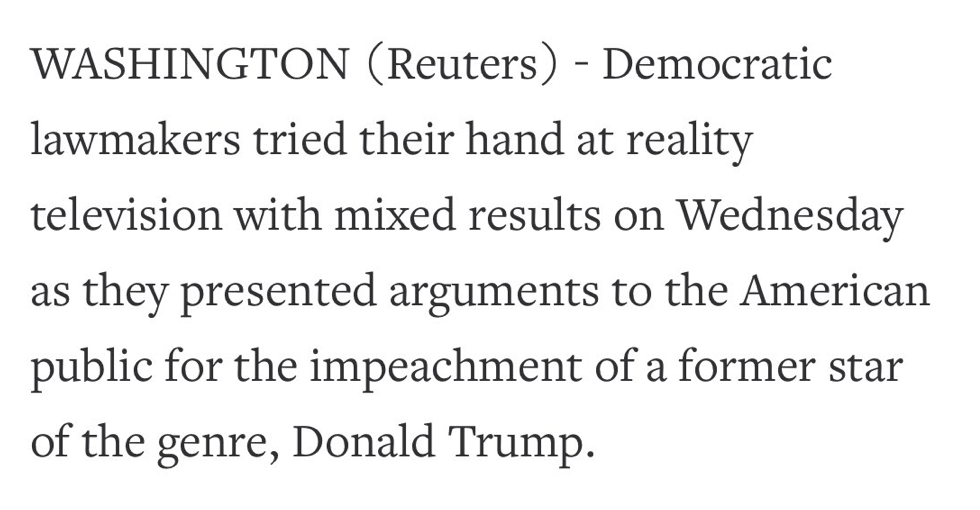 Toronto Star sports columnist Bruce Arthur was just as incensed. “This is such bad journalism,” he wrote.

Cheri Jacobus, a professional Trump hater and pundit, remarked, “Stop it. Media requiring ‘bang’ and ‘pizzazz’ is what got us Trump.”

TV writer David Slack, who has written for shows like Law & Order, was furious at NBC News. “This is a moronic headline that disrespects both your audience & our democracy,” he tweeted. “NBC News should immediately fire everyone responsible for this. Our country is in crisis and its survival depends on smart, competent reporting — not ‘analysis’ that treats this like a reality show.”

NBC News obviously deserves the ribbing. But Reuters, I’m not so sure.

Boring is boring. There’s not much we can do but write what we see and not be activists.