The Supreme Court heard arguments in a gun rights case for the first time in nearly 10 years Monday, involving a challenge to since-repealed New York City rules that greatly restricted the transportation of firearms.

Though the case is closely watched as a possible bellwether for future disputes over the Second Amendment, several members of the court, including Chief Justice John Roberts, seemed ready to dismiss the case for procedural reasons, without a decision on the contested New York regulations.

A decisive moment in Monday’s arguments came when Roberts asked New York City lawyer Richard Dearing if the old rules will have any lingering effects on gun owners. Dearing said no and promised that New York officials will not use the old rules as a basis for any future licensing or enforcement decisions.

“The city is committed to closing the book on that old rule and we’re not going to take it into effect,” Dearing said.

Under a since-repealed ordinance, New York residents had to obtain a “premises license” from city authorities to lawfully possess a firearm. That license restricted possession to the address listed on the license itself. The transportation guidelines that license holders had to follow were before the high court Monday.

Those rules provided that gun owners could carry their firearms to one of seven shooting ranges in the city. To do so, however, they had to keep their weapons in a locked container, with ammunition carried separately. They could not carry their guns past city lines. If they wished to transport weapons to any location besides an approved range, they had to obtain written permission from a city official.

“Investigations have revealed a large volume and pattern of premises license holders who are found in possession of their handguns in violation of the restrictions on their license,” Lunetta said.

“Public safety compels that these restrictions be effectively monitored and enforced, and that the perception of effective monitoring be supported,” he added.

The plaintiffs in Monday’s case, Romolo Colantone, Jose Anthony Irizarry and Efrain Alvarez, are New York residents who wish to transport their weapons beyond city limits to shooting competitions and vacation homes for self-defense. The New York State Rifle and Pistol Association is also a plaintiff in the dispute.

The 2nd U.S. Circuit Court of Appeals said the restrictions the rules impose are “trivial.”

“New York has licensed the ownership and possession of firearms in their residences, where Second Amendment guarantees are at their zenith, and does nothing to limit their lawful use of those weapons in defense of hearth and home — the core protection of the Second Amendment,” Judge Gerard Lynch wrote in an opinion upholding the regulations.

After the Supreme Court decided to hear the case, the city relaxed its rules and asked the justices to dismiss the case as moot. That step is appropriate because New York’s amended regulations give the plaintiffs everything they sought in court, city lawyers argue. The city’s move was widely seen as an attempt to head off an adverse judgment, particularly one that could favor gun rights in future cases.

“The city, of course, has struggled mightily ever since this court granted [review] to make this case go away, but those efforts are unavailing and only underscore their continuing view that the transport of firearms is a matter of municipal grace rather than constitutional right,” said lawyer Paul Clement, who represents that plaintiffs.

Dearing countered that the city’s maneuvering is no reason for alarm.

“It’s a good thing and not a cause for concern when the government responds to litigation by resolving matters through the democratic process,” he told the justices.

Even though New York has loosened its gun transportation rules, Clement argued Monday’s case is not moot. He said the city could take violations of the old rules into account during future licensing decisions or revert to its original restrictions at some future date. As such, the court should definitively say the old laws are unconstitutional, he said. Justice Ruth Bader Ginsburg was skeptical.

“What’s left of this case?” Ginsburg asked. “The [plaintiffs] have gotten all the relief that they sought. They can carry a gun to a second home. They can carry it to a practice range out of state.”

Though the mootness issue consumed a majority of the court’s time, many of the justices seemed to think the old rules were problematic. As such, it seemed that the city will lose if the court reaches the merits of the case.

“One problem with the prior regulation — if you wanted to have a gun in your second home, you had to buy a second gun,” she said. “And what public safety … end is served by saying you have to have two guns instead of one and one of those guns has to be maintained in a place that is often unoccupied and that, therefore, more vulnerable to theft?”

“If they’re not less safe, then what possible justification could there have been for the old rule, which you have abandoned?” Alito wondered.

The Supreme Court handed down a pair of landmark Second Amendment decisions in 2008 and 2010. In the first case, District of Columbia v. Heller, a five-justice majority ruled that the Second Amendment protects the right to keep firearms in the home for self-defense. Two years later in McDonald v. Chicago, the high court said the Heller decision also applies to the states. (RELATED: Sheriffs Group Urges Supreme Court To Strike Down New York City Gun Rules) 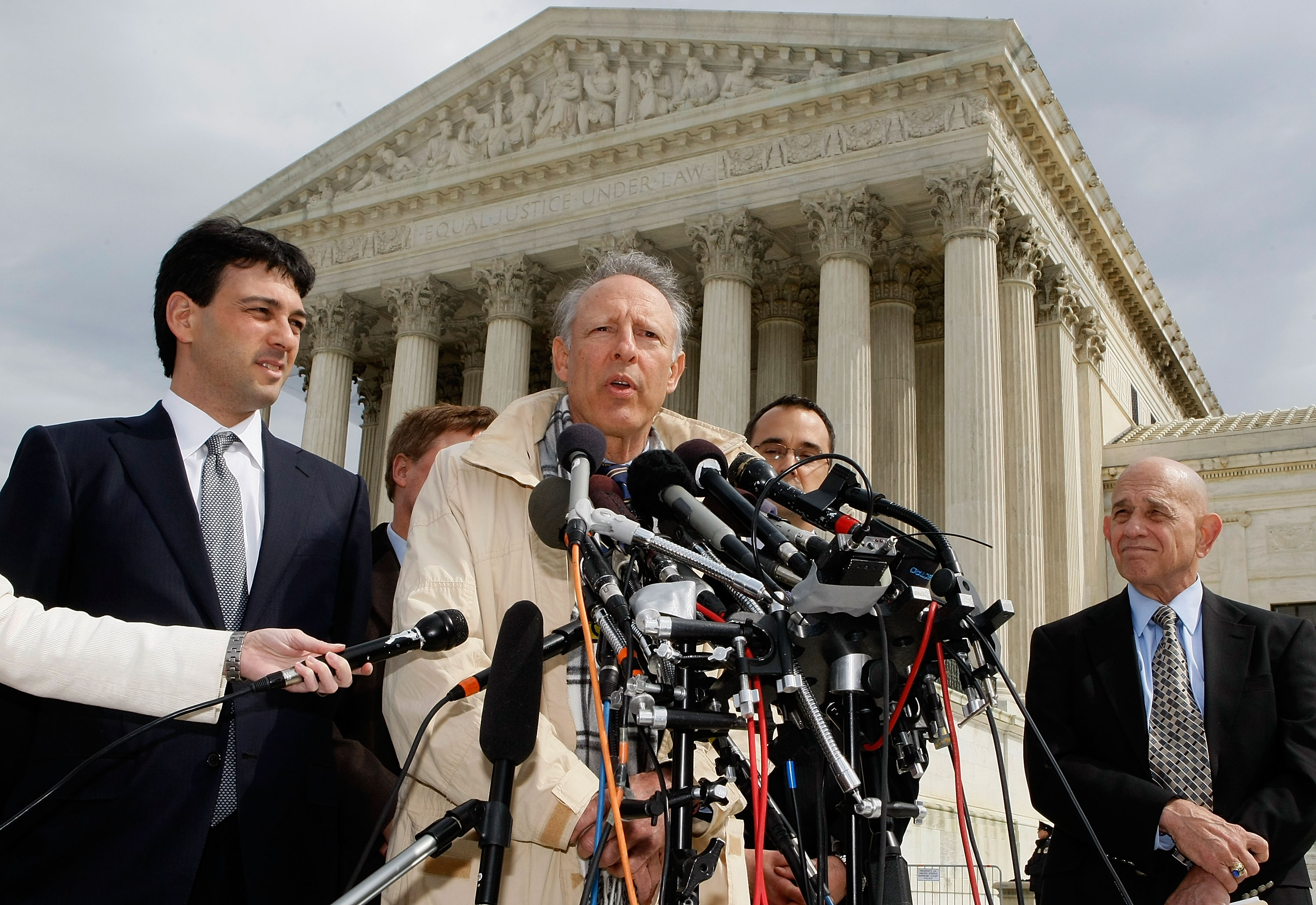 In the near decade that followed McDonald, however, the high court did not hear arguments in a single Second Amendment case, turning down a slew of appeals involving concealed carry permits, zoning laws that burden firearms vendors and the gun rights of former felons. The court’s continued silence on the subject was especially frustrating to gun rights advocates, who have fared poorly in the lower courts in recent years.

“Over the past decade, the Supreme Court has said nothing about the scope of the Second Amendment,” South Texas College of Law professor Josh Blackman told the Daily Caller News Foundation. “During that period, the lower courts have taken the lead, and narrowly construed the right to keep and bear arms. Now, the Supreme Court can clarify whether the right extends beyond the home, and how courts should scrutinize gun control regulations.”

“However, I expect the Court to dismiss the New York case, as the controversy is now moot,” Blackman added.

Justices Clarence Thomas and Neil Gorsuch accused their colleagues of treating the Second Amendment as “a disfavored right” in a 2017 dissent, after the court refused to hear an appeal in a firearms case from California.

“For those of us who work in marbled halls, guarded constantly by a vigilant and dedicated police force, the guarantees of the Second Amendment might seem antiquated and superfluous,” Thomas wrote. “But the framers made a clear choice: They reserved to all Americans the right to bear arms for self-defense. I do not think we should stand by idly while a state denies its citizens that right, particularly when their very lives may depend on it.”

During Monday’s argument, Clement urged the justices to use the New York case to send a clear message to lower courts about how to apply the Second Amendment.

“I think it would send a very important signal to the lower courts to say that when a regulation like this is inconsistent with text and has no analogue in history or tradition, it is unconstitutional, full stop,” he said.

Democratic Sen. Sheldon Whitehouse of Rhode Island filed an amicus (or “friend of the court”) brief urging the justices to dismiss the case as moot. The brief warned that a pro-gun ruling could inflame the progressive push to expand the Supreme Court and broadly accused the justices of bending procedural rules to advance a conservative judicial agenda.

“The Supreme Court is not well. And the people know it. Perhaps the Court can heal itself before the public demands it be ‘restructured in order to reduce the influence of politics,'” Whitehouse wrote. “Particularly on the urgent issue of gun control, a nation desperately needs it to heal.”

Judicial Watch, a conservative oversight group, filed an ethics complaint against Whitehouse with the Rhode Island Supreme Court in August. Senate Republicans sent a letter to the Supreme Court accusing Whitehouse and certain Democratic presidential candidates of threatening the justices with “political retribution.” The GOP lawmakers added that the number of justices will remain fixed at nine for as long as they serve.

The case is No. 18-280, New York State Rifle and Pistol Association v. City of New York.

This is breaking news. This post will be updated.