Five Washington Post reporters appeared to celebrate the impeachment of President Donald Trump on Wednesday night in a photo showing them drinking beer and eating snacks at a local Washington, D.C. bar.

“Merry Impeachmas from the WaPo team!” Rachael Bade, who covers Congress for the Post, declared on Twitter.

She posted a photo of herself alongside fellow Post reporters Paul Kane, Karoun Demirjian, Seung Min Kim, and Mike DeBonis. At least three of the reporters in the shot also serve as CNN analysts. (RELATED: Impeachment Has Been More Than Kind To Republican Fundraising: RNC)

Cocktail napkins on the table suggest the reporters were at the Dubliner, a famous Irish pub near the Capitol. At least two of the reporters at the table had beers in front of them. 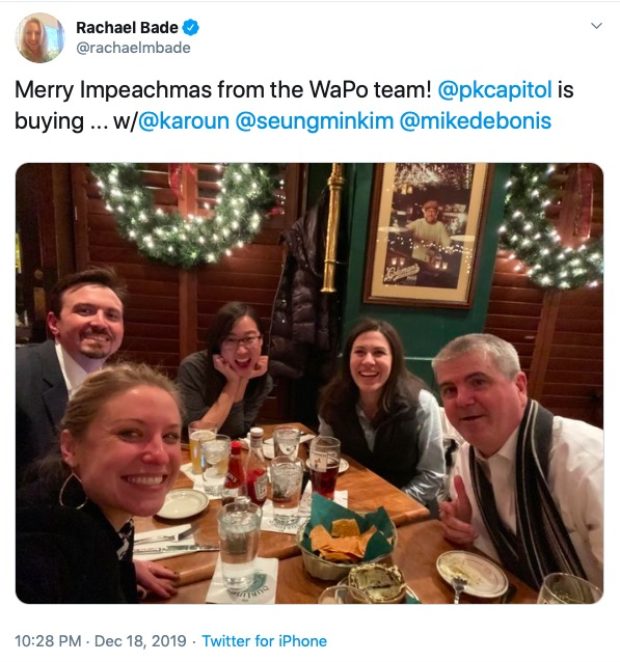 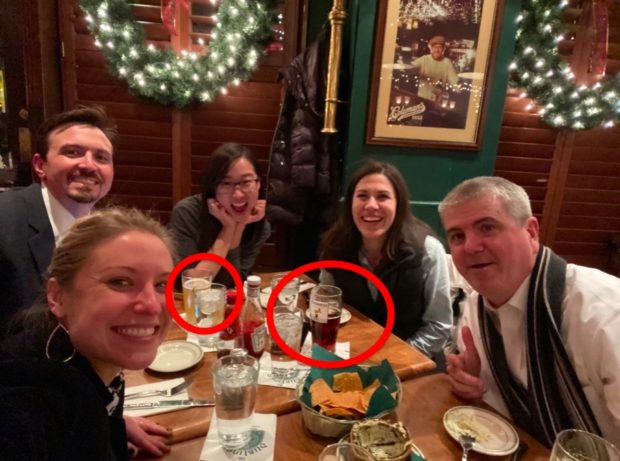 The Washington Post did not immediately respond to a request for comment on the photo. (RELATED: Iowa Reporter’s Own Offensive Tweets Surface After He Delves Deep Into Football Fan’s Background)

President Donald Trump was impeached for alleged abuse of power and obstruction of Congress on Wednesday night.

Bade suggested reporters go to happy hour after the impeachment vote in an earlier tweet because of the “hours of late-night & weekend depositions, freezing-cold hearings, & the general circus of all this for the past 3 months,” but it is unclear why she chose to state “Merry Impeachmas.”

I feel like we the Capitol Hill press corps, who have covered hours of late-night & weekend depositions, freezing-cold hearings & the general circus of all this for the past 3 months, deserve “I survived impeachment” shirts.

Or, a nice happy hour after this vote tonight will do

This article has been updated to include a screenshot of Bade’s tweet, which was deleted after publication. Bade claimed the photo of the reporters at the bar was “misinterpreted” due to its caption.

I’m deleting a tweeting tonight that is being misinterpreted by some as an endorsement of some kind. To be absolutely clear, we at the Post are merely glad we are getting a break for the holidays after a long 3 months. I will retweet the group photo w/ a better caption !