Author and award-winning journalist Glenn Greenwald spoke with the Daily Caller Sunday, and he didn’t hold back on topics ranging from his cybercrime charges in Brazil to Sen. Bernie Sanders’ electoral prospects.

“I’m not an expert in Brazilian law, but the overwhelming consensus of the people who are is that the charges that are brought against me are not even a close call, and it’s actually an abuse of prosecutorial power. Members of the Supreme Court have indicated to the media that they regard the charges as invalid,” Greenwald said of the charges.

The Brazilian government charged the writer after he published text messages that severely embarrassed anti-corruption prosecutors. They claim that he was involved in a criminal conspiracy. (RELATED: Subscribe now and become a Patriot to read the rest of this exclusive interview)

Greenwald also had a lot to say about the Democratic primary and impeachment.

“Basically, what has the past four years of Trump’s presidency been dominated by? Russian and Ukraine — like do you think people in the key swing states wake up in the morning and give the slightest thought to like, what Putin is doing?” he told TheDC.

“Or whether the U.S. is like, sufficiently arming Ukraine, or who knows who the ambassador of Ukraine is or who gives a fuck if Trump wanted to fire him? Or like, Lev Parnas, or whatever that guy’s name is who gave that interview to Rachel Maddow, that everyone can’t stop talking about now?”

“What do the Democrats stand for…some kind of weird retrograde Cold War obsession that no one cares about? You know, when you’re struggling with student debt and having to work two or three jobs that don’t provide health care, at Walmart, all of that, you know, just like, the shitty stagnating wages.” 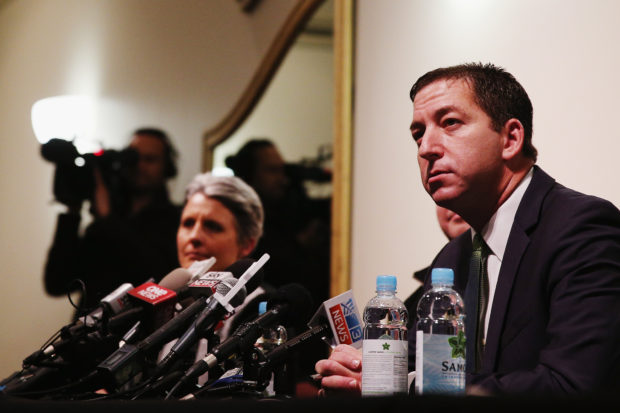 Glenn Greenwald talks to the media following the revelations about New Zealand’s mass surveillance at Auckland Town Hall on September 15, 2014 in Auckland, New Zealand. The general election in New Zealand will be held this weekend, on 20 September 2014. Hannah Peters/Getty Images

Greenwald is a fan of one candidate in the primary, however: Sen. Sanders.

“I don’t think any other Democrat has anything to say about that except Bernie Sanders, who Trump, I don’t know if you heard about that newly released recording that said he was the only one he feared when it came to Hillary’s vice president because he has credibility to condemn trade and neoliberalism, and all the other stuff that has destroyed jobs in the Midwest,” he said.

“I think the Democrats best chance by far is nominating Bernie because he does talk to regular people’s concerns. I don’t think any of the other Democratic candidates do.”

He added, “I just think Bernie, of all the candidates, it’s not just that he seems like an outsider, it’s that he smells and talks like one. Kinda like Obama did in 2008 and Trump did in 2016–that was the appeal of both Obama and Trump more than anything, is that they seemed like outsiders to a political system that people hate.”

Finally, Greenwald praised conservative media outlets like Fox News and the Daily Caller, saying that such outlets did some of the strongest reporting on Russia. He specifically name-checked Daily Caller News Foundation reporter Chuck Ross.

Greenwald has been a prominent critic of the mainstream media, especially on issues of foreign policy and war.

He claimed last year that he was “banned” from MSNBC over his skeptical stance on claims of President Donald Trump colluding with Russia. (RELATED: Glenn Greenwald Called Out NYT’s Piece Criticizing Barr)