Senate Majority Leader Mitch McConnell slammed the mob of Trump supporters who stormed the U.S. Capitol shortly after the Capitol was cleared.

In a speech Wednesday night on the Senate floor, McConnell went after the rioters who entered the Capitol to interrupt Congress’s counting of the Electoral College vote on Jan. 6 and a vote to certify President-elect Joe Biden’s win against President Donald Trump. McConnell said the Senate will move forward to get their job done “tonight.”

“The United States Senate will not be intimidated. We will not be kept out of this chamber by thugs, mobs or threats. We will not bow to lawlessness or intimidation. We are back at our posts. We will discharge our duty under the Constitution for our nation. And we are going to do it tonight,” McConnell said.

“This afternoon, Congress began the process of honoring the will of the American people and counting the Electoral College votes. We have fulfilled this solemn duty every four years for more than two centuries. Whether our nation has been at war or at peace, under all manner of threats, even during an ongoing armed rebellion and Civil War, the clockwork of our democracy has carried on,” he continued.

“The United States and the United States Congress have faced down much greater threats than the unhinged crowd we saw today. We have never been deterred before and we will not be deterred today. They tried to disrupt our democracy. They failed,” McConnell continued. (RELATED: ‘Pipe Bomb Reported’: Hill Staff Evacuates As Pro-Trump Mob Storms Capitol Building) 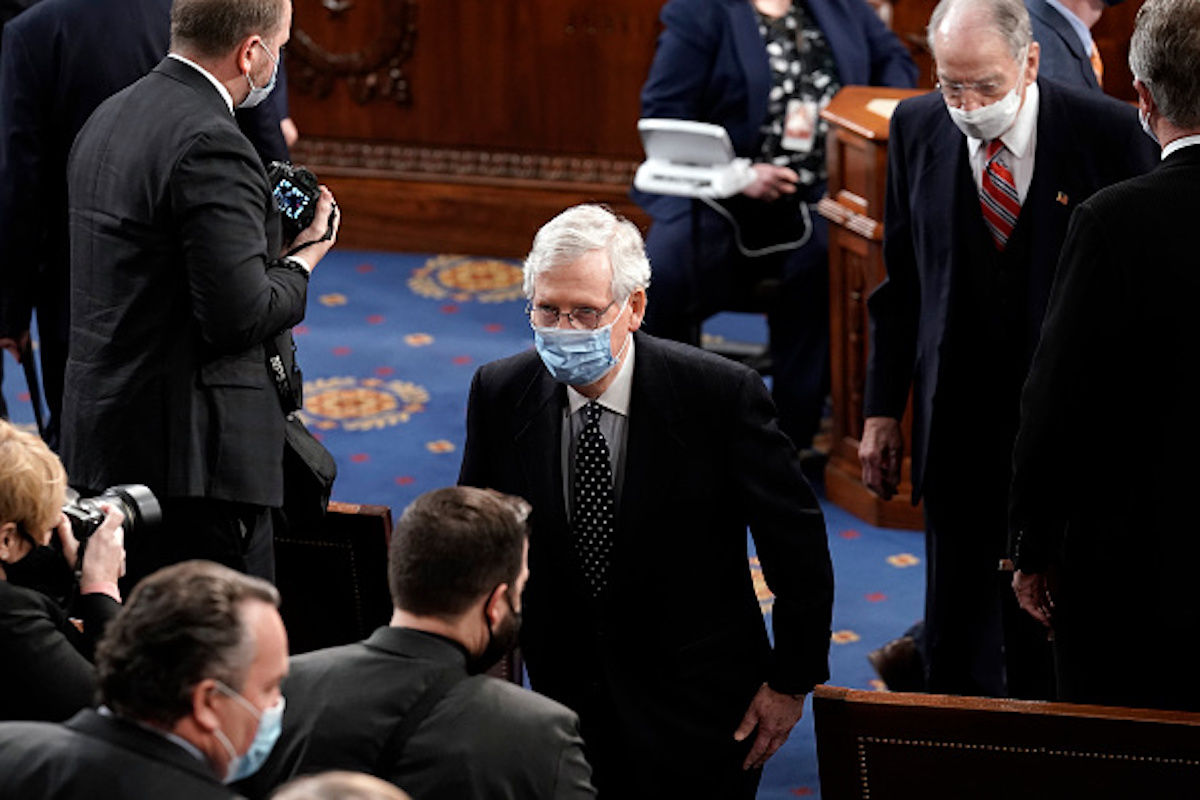 Senate Majority Leader Mitch McConnell (R-KY) leaves the House chamber for the Senate to consider objections to certify Electoral College votes during a joint session of Congress at the U.S. Capitol on January 6, 2021 in Washington, DC. (Photo by J. Scott Applewhite-Pool/Getty Images)

“We’ll follow our precedents, our laws, and our Constitution to the letter. And we will certify the winner of the presidential election,” he added. (RELATED: REPORT: Woman Shot In Capitol Building Dead)

There were at least a dozen senators who said they will object during Congress’s counting of the Electoral College vote. Republican Missouri Sen. Josh Hawley was the first senator to make the announcement Thursday, citing big-tech platforms’ alleged interference in the election in support of Biden and claiming election laws were broken in Pennsylvania.

It is not yet clear as to if the riots will change senators’ votes.

Vice President Mike Pence, who is overseeing the Jan. 6 meeting of Congress, said he will “follow the law” and returned to the Capitol Wednesday night after it was cleared by law enforcement.