The number of homicides in six major cities across the country has increased compared to last year, disproportionately affecting black people, according to crime data.

Black people have represented a massive share of murder victims in six major cities through the first six months of 2021 compared to last year, which itself saw a large crime surge, according to data analyzed by the Daily Caller News Foundation. The DCNF analyzed both police department data and homicide reports compiled by local news outlets to determine how black people have been victimized in the wake of the 2020 crime spike.

“We are seeing an uptick in violent crime across the country, specifically gun violence,” Miami-Dade County Mayor Daniella Levine Cava told The New York Times earlier this month. (RELATED: The War On Police Is In Full Swing. How Does It End?)

The DCNF collected homicide data from Chicago, Baltimore, Milwaukee, Pittsburgh, Los Angeles and Indianapolis, some of the only cities in which such data is readily available. Most major cities have limited statistics tracking 2021 murders and homicide victims.

Democratic leaders of most of the cities examined voted to greatly reduce police funding amid widespread Black Lives Matter protests last year. In the wake of the death of George Floyd, who died after former Minneapolis police officer Derek Chauvin kneeled on his neck in May 2020, thousands of protests and riots took place across the country. 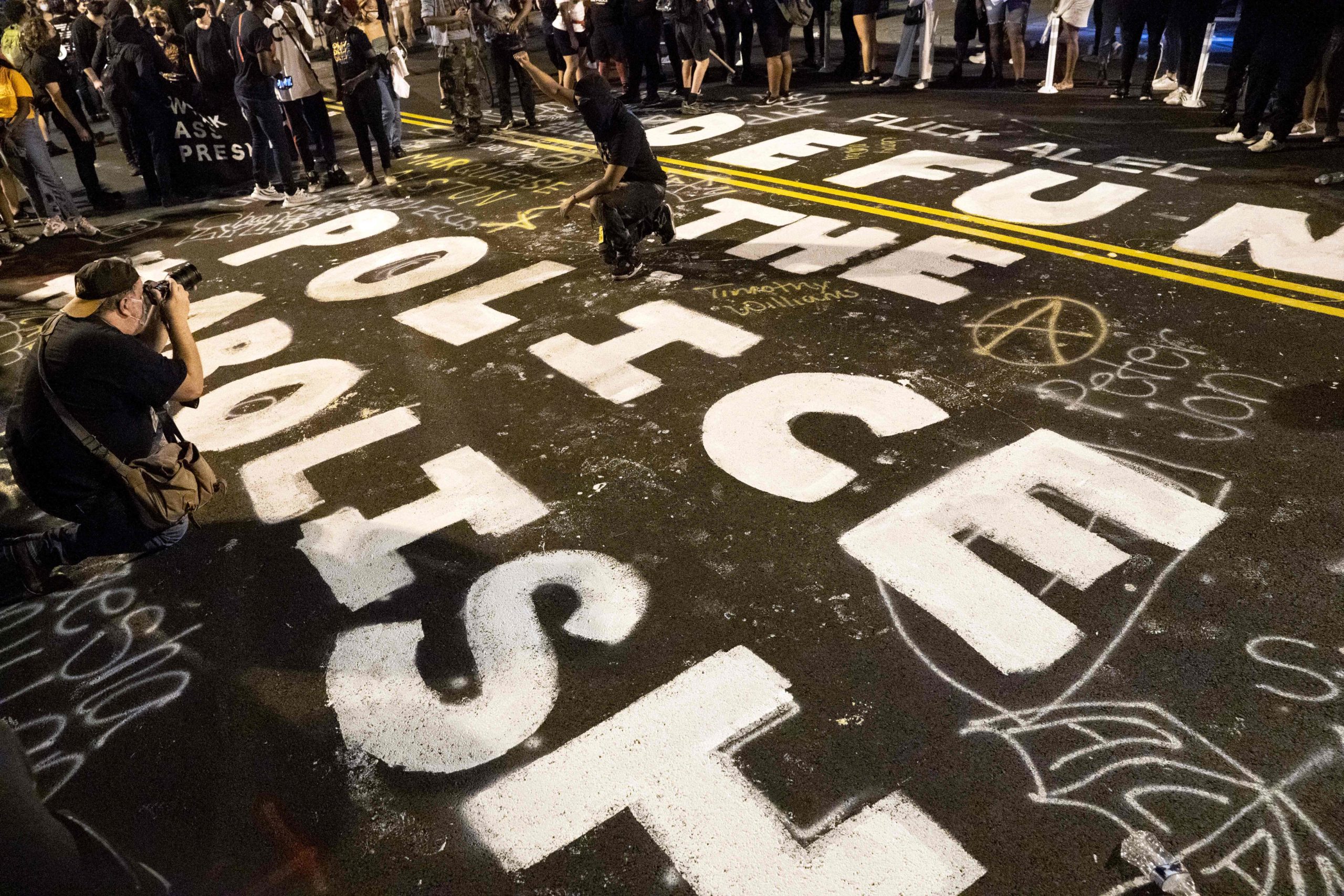 Demonstrators raise their fists around a “defund the police” mural on Aug. 27, 2020 in Washington, D.C. (Jose Luis Magana/AFP via Getty Images)

University of Missouri criminologist Richard Rosenfeld blamed the uptick in violence seen nationwide on the lack of trust between police and citizens, according to the NYT.

“When police legitimacy is greatly reduced, you get more crime because people are no longer relying on the criminal justice system for assistance,” Rosenfeld told the NYT. “People are less willing to cooperate with police in investigations, less willing to report crimes or other problems to the police and more willing to take matters into their own hands.”

As Violent Crime SURGES across America, some politicians and some in the media are gaslighting the public into thinking the Police are the Problem…

At least 317 total homicides were committed in Chicago between Jan. 1, 2021 and June 22, 2021, according to a Chicago Sun-Times database. In that same period last year, 295 murders were committed. (RELATED: ‘A Lot Of Netflix, Even More Killings’: Tucker Carlson Blasts Politicians Who Blame Rising Crime On COVID)

“While we will slow the rate of growth, with a resulting $80 million in corporate fund savings, on my watch we will never make cuts or policy changes that inhibit the core mission of the police department, which is to serve and protect,” Lightfoot said, according to the Sun-Times.

Illinois became the first state to completely abolish its cash bail system earlier this year, NBC News reported. The legislation laid out a new, stricter decision-making process for judges to determine if a person charged with a crime presents a threat.

“This legislation marks a substantial step toward dismantling the systemic racism that plagues our communities, our state and our nation and brings us closer to true safety, true fairness and true justice,” Democratic Gov. J.B. Pritzker said after signing the bill in February, according to NBC News. 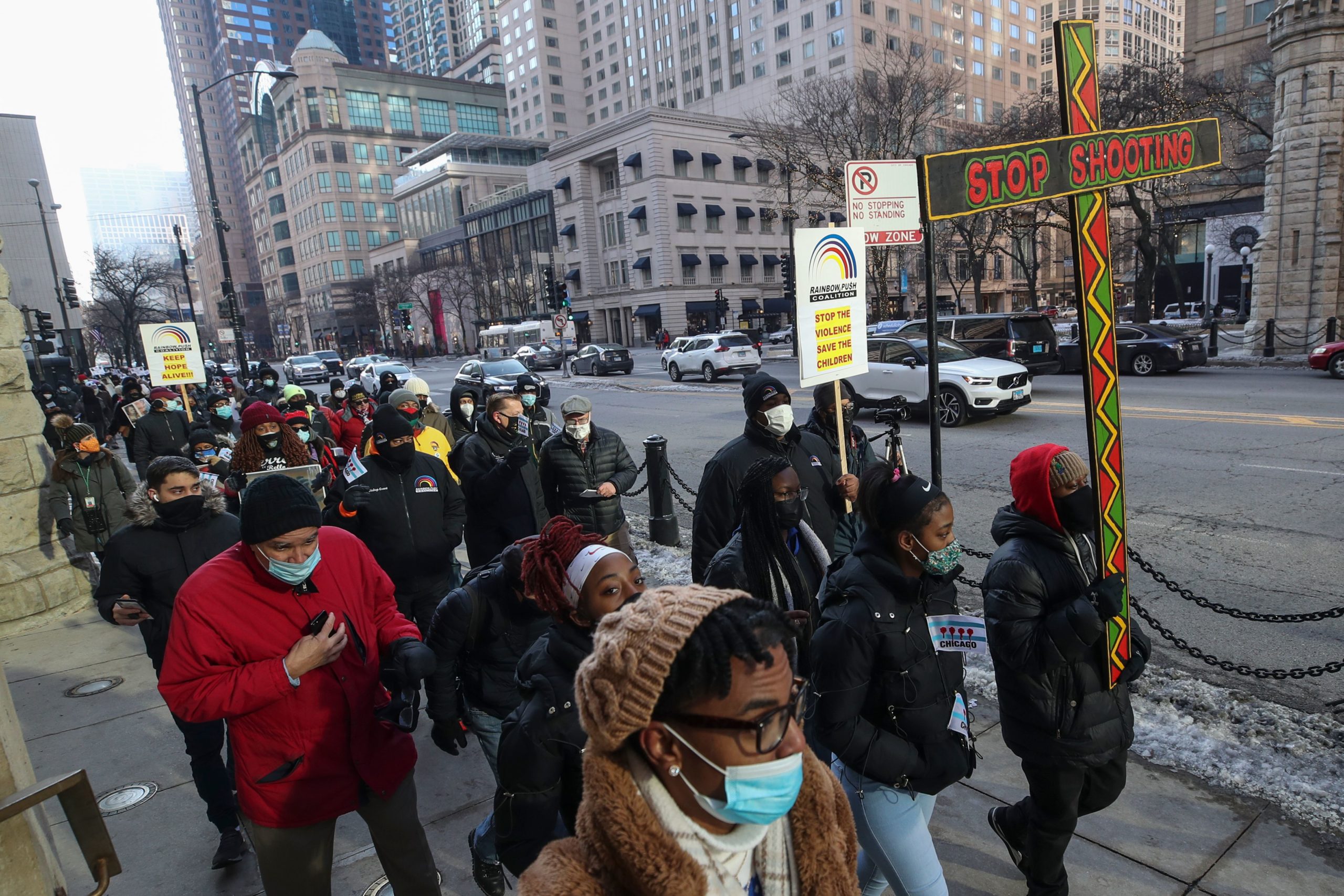 People walk during an anti-gun violence march on in Chicago, Illinois, on Dec. 31, 2020. (Kamil Krzaczynski/AFP via Getty Images)

While murder statistics between that same period in 2020 were unavailable, black people were the victims of 130, or 39%, of the 335 total homicides committed in Baltimore for all of last year, the database showed.

The majority of murder victims in 2020 and 2021 were listed without racial information in the Baltimore Sun database. Black people represented the vast majority of victims with their race listed.

But the Baltimore City Council agreed to cut $22 million from the city’s police budget in June 2020, according to the Baltimore Sun. (RELATED: Violent Crime Surged In These Cities After Mass Black Lives Matter, Anti-Police Protests)

“I am proud to lead a City Council that took the first step to responsibly reduce Baltimore’s budget dependence on policing,” former City Council President Brandon Scott, who is now the city’s mayor, said after the vote, the Baltimore Sun reported. “This is just the beginning, and I intend to continue leading this process to redirect our public dollars and reimagine public safety in Baltimore.”

After multiple shootings in a popular area of Baltimore earlier this month, 37 businesses threatened to stop paying taxes unless Scott addressed surging crime, according to Fox affiliate WBFF-TV. The business owners argued that allowing minor crime to continue leads to major violent crimes. 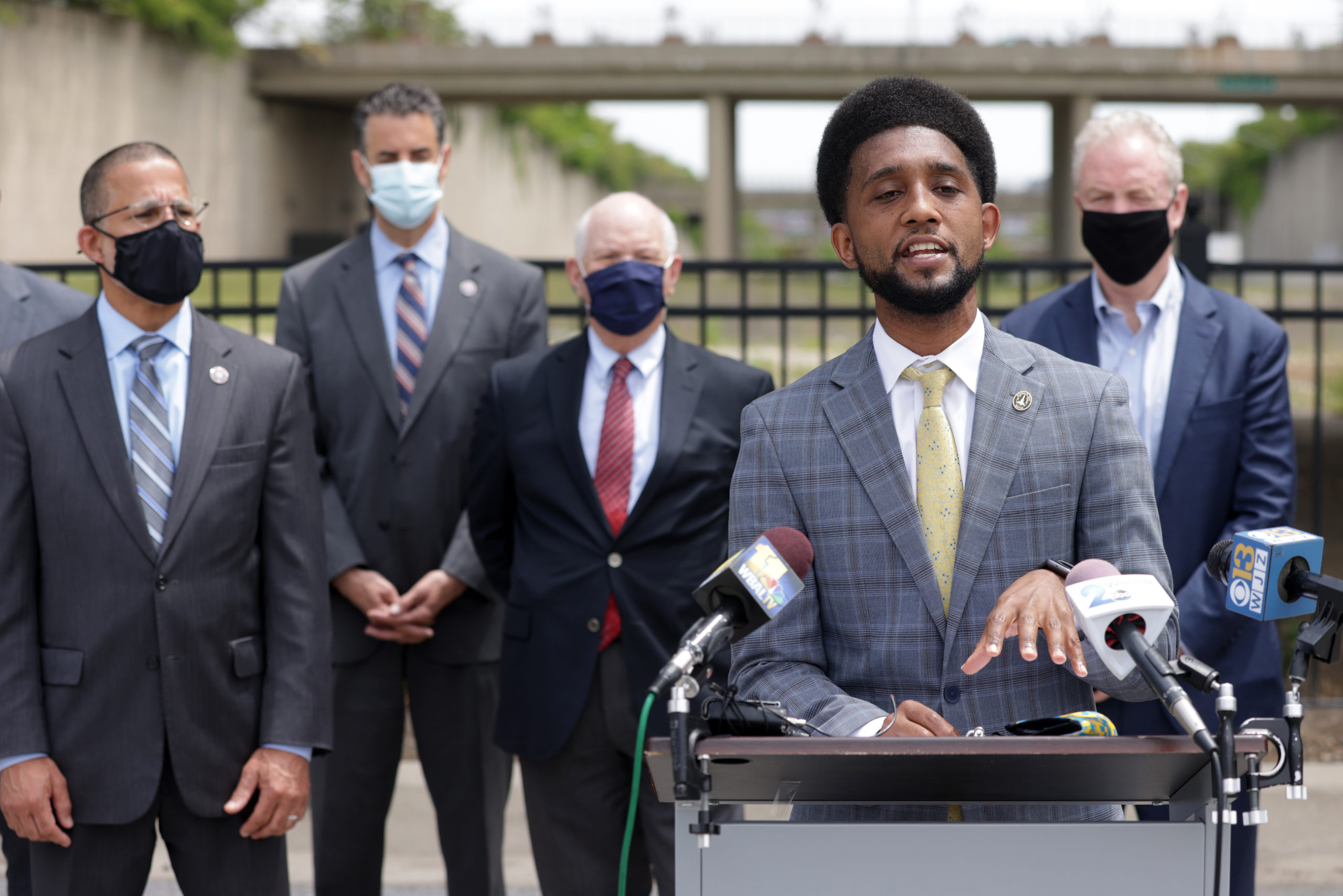 The number of total murders increased in Milwaukee from 75 in the period between Jan. 1, 2020, and June 17, 2020, to 87 committed over that same period this year, according to murder reports compiled by the Milwaukee Journal Sentinel.

Black people were the victims of 79, or 90%, of the total murders this year, the database showed. While isolated victim data wasn’t available for the first six months of 2020, black people represented 74% of all murder victims in Milwaukee last year.

The Milwaukee Common Council approved a police budget cut in November that reduced the department by 120 officers, the Journal Sentinel reported. (RELATED: Triple-Murder Suspect Forces Woman Into Driving 33 Hours With Him To Turn Himself In)

“Although the proposed budget cut would undoubtedly impact the operations of the Milwaukee Police Department, we remain committed to working and engaging with our community, elected officials and public safety partners to ensure that all of our neighborhoods are safe, vibrant and livable,” the department said in a statement after Democratic Mayor Tom Barrett proposed the budget, according to the Journal Sentinel.

There were 20 murders between January and April this year and 10 in that same period in 2020, according to Allegheny County. Data beyond April 31, 2021, hasn’t been made available.

The Pittsburgh City Council approved a police department hiring freeze in July 2020, according to WPXI-TV. The council also ordered the department to redirect 10% of the budget to social service programs every year.

The Pittsburgh Bureau of Police said the actions would “greatly impact” its ability to increase diversity within its ranks, WPXI reported. 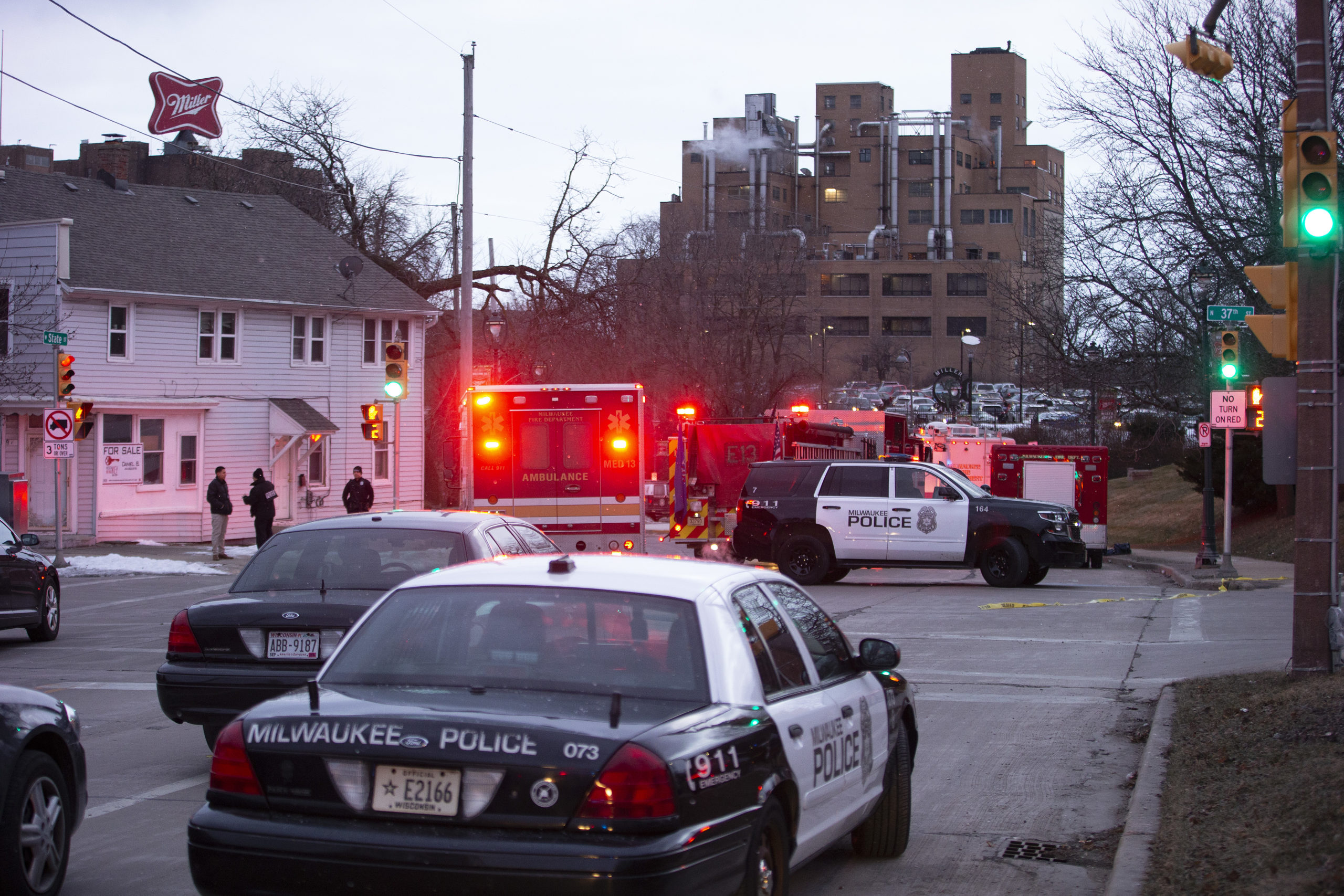 Emergency personnel arrive to the scene of a shooting on Feb. 26, 2020 in Milwaukee, Wisconsin. (Nuccio DiNuzzo/Getty Images)

Between Jan. 1, 2020, and June 21, 2020, black people were the victims of 92 of the 272 homicides committed in Los Angeles County, which includes the city and surrounding communities, according to a Los Angeles Times database. In the same period this year, they represented 103 of the 315 total homicides.

The data showed that the share of black murder victims in the county has stayed level at around 33% year-over-year. However, the uptick in violence this year has caused at least 11 additional deaths in Los Angeles County’s black community compared to last year. (RELATED: ‘They’re Not Concerned About The General Public’: NY, LA Police Unions Blast Massive Budget Cuts)

“It will take years to recover from that,” Los Angeles Police union spokesman Dustin DeRollo told the DCNF last summer. “And it will result immediately with less officers patrolling the streets.”

“What that means simply is longer response times to emergency calls,” he continued. “It means less time to do community-based policing like building relationships in neighborhoods. And it also will mean less ability to implement the training that everybody wants our officers to have.”

But, amid the increased violent crime, the Los Angeles County Metro unanimously approved a $36 million budget boost for transit police in March. Garcetti, who serves on the Metro’s board, voted in favor of the budget increase.

Black people represented 58 of the 98 murder victims in Indianapolis between Jan. 1, 2021 and June 1, 2021, according to a homicide database created by the Indianapolis Star. Last year, black people were the victims in 53 of the city’s 70 total murders.