Police unions accused New York and Los Angeles city officials of recklessness and said they don’t have the public’s interest in mind regarding recent cuts to police department funding in the two cities.

New York City officials approved a $1 billion cut to the city’s police department on June 30, while the Los Angeles City Council agreed on a $150 million cut to its police on July 1. Calls to defund police departments nationwide picked up steam in the wake of the death of George Floyd, a black man who died in Minneapolis police custody on May 25 after a white officer kneeled on his neck, video shows.

“The whole defund movement itself is a scam,” Vincent Vallelong, vice president of the Sergeants Benevolent Association of New York told The Daily Caller News Foundation.

Vallelong decried the cut to police overtime pay in New York City, which he said is necessary in times of crisis. The reduction of new police officers and negative effects on the department’s successful community policing program are the most damaging parts of Los Angeles’ budget cuts, said Dustin DeRollo, spokesman for the Los Angeles Police Protective League.

However, proponents of defunding the police argue that police departments nationwide are often tasked with jobs – like dealing with mental health crises – that they aren’t equipped to deal with. Others say that the only way to reduce police violence is by reducing the amount of police officers.

“Here’s an immediate demand we can all make: Cut the number of police in half and cut their budget in half,” organizer Mariame Kaba wrote in The New York Times on June 12. “Fewer police officers equals fewer opportunities for them to brutalize and kill people.”

The New York Police Department will maintain its ability to adequately protect all communities in the city despite the billion-dollar budget cut, Mayor Bill de Blasio said in a June 30 statement.

Much of the funds that are being taken from the police budget will instead be put toward summer youth programs, education, social services and the New York Parks Department. Overtime pay and school safety are the two areas of the police department that will see the biggest funding reduction, according to de Blasio’s statement.

“From reinvesting funds from the NYPD in youth programming and social services, to building new community centers, this budget prioritizes our communities most in need while keeping New Yorkers safe,” de Blasio said. 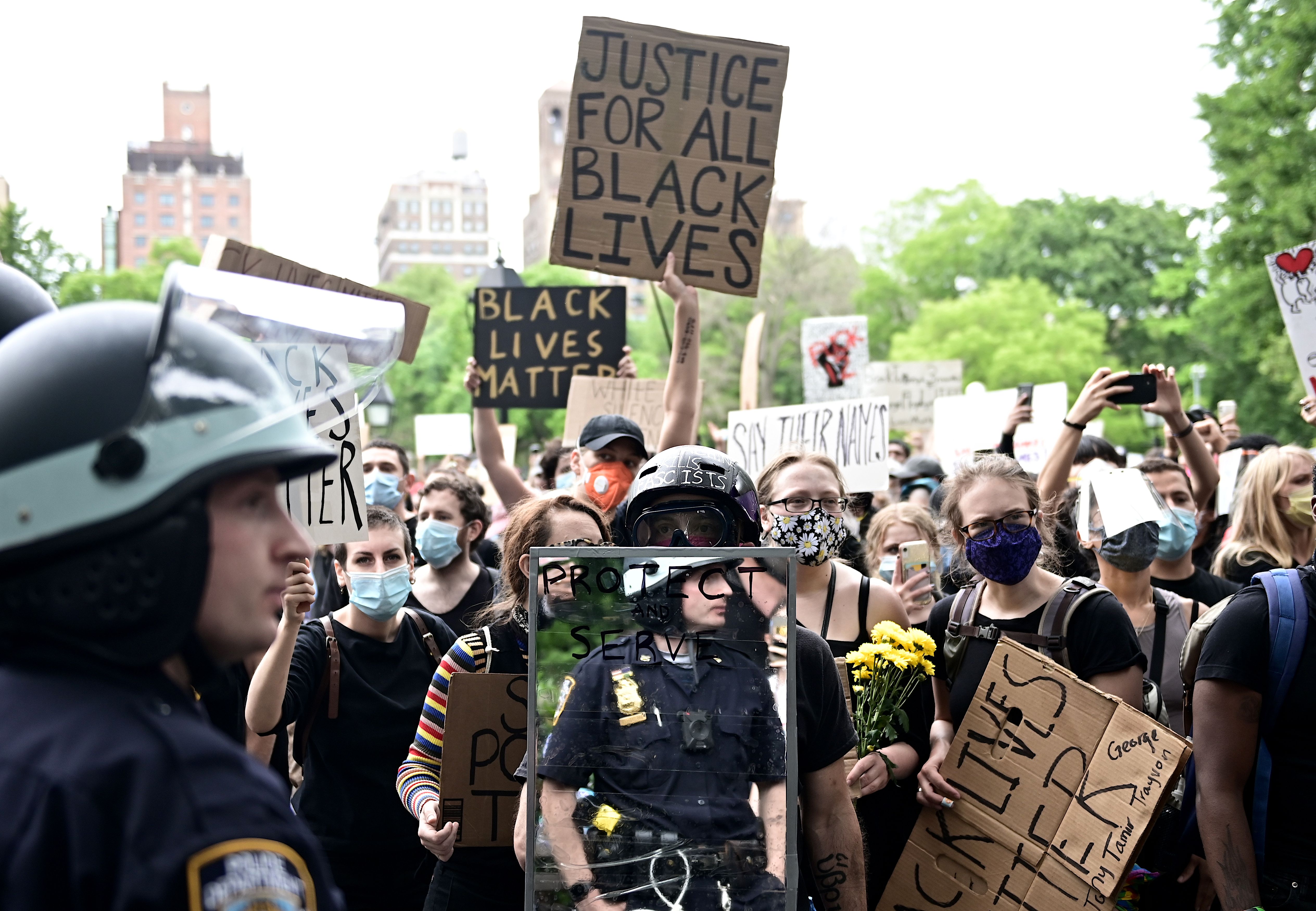 The budget, which passed by a vote of 32-17, caused a major division to form within the city council with several members arguing that police funding shouldn’t be cut while crime is spiking, according to The New York Times. Homicides have increased by 21% and shootings by 46% in the first six months of 2020 compared to the same period last year, NBC New York reported.

“Overtime comes from whatever major incident happens,” Vallelong said. “So, if they only have a certain amount of money budgeted, does that mean that once they run out of any other money to pay police officers, they expect the cops to come in for free?” (RELATED: REPORT: Hackers Are Buying Police Body Cameras On Ebay And Finding Video Evidence)

Vallelong noted that increased funding in the police department under the mayorship of Rudy Giuliani in the 90s helped clean up the streets and bring life to the city.

The budget shifts the homeless engagement unit away from the department. Mental health crisis and homelessness calls often turn violent, a prospect that social workers may not be prepared for, Vallelong said.

“Good luck when the person turns violent because that could happen at any moment. It could be the nicest person in the world and all of a sudden they snap,” he said “And then that [social worker] is pretty much going to be in a world of shit.” 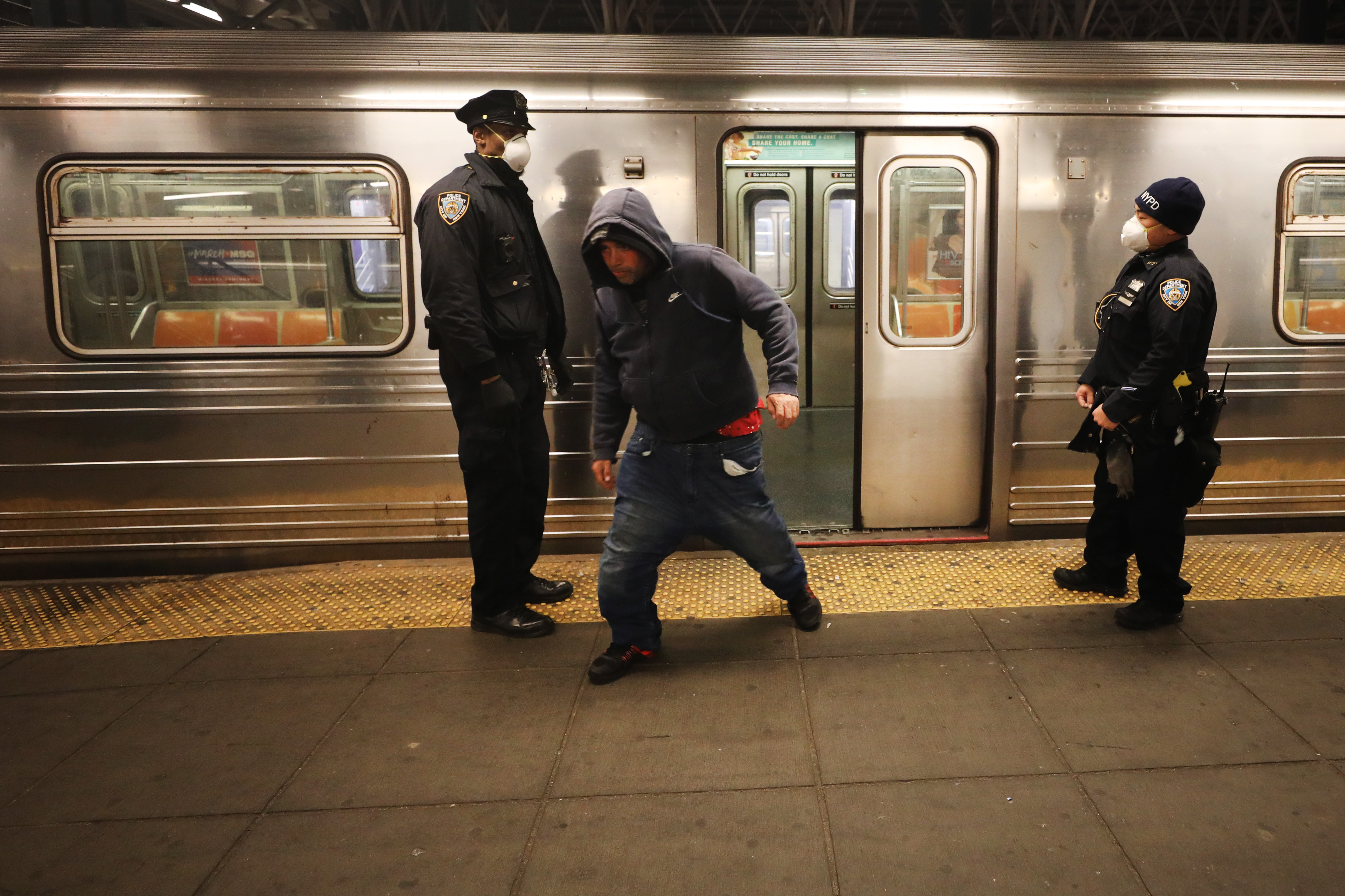 A homeless man runs by New York police on May 07, 2020. (Spencer Platt/Getty Images)

He added that the New York City Department of Education, which is receiving $116 million of the funds being shifted from the police department, is already overfunded and doesn’t serve the community well.

New York police officers tore down barricades outside City Hall on July 1 where protesters had camped out demanding cuts to the police budget, according to The Daily Caller.

The Los Angeles City Council, through a 12-2 vote, approved its $150 million budget cut to the city’s police department, which would mainly be achieved through overtime pay reductions and hiring reduction, according to the Los Angeles Times. The majority of the money will be shifted into hiring programs and summer youth programs for poor communities, according to Councilman Curren Price, the LA Times reported.

“This is a step forward, supporting minority communities in ways in which they deserve — with respect, dignity and an even playing field,” said Price, according to the LA Times.

Mayor Eric Garcetti stopped supporting an increase in the police budget, which he backed in May, KCBS-TV reported. (RELATED: REPORT: Poll Finds Nine Out Of 10 Americans Think Police Brutality And Racism Are Problems) 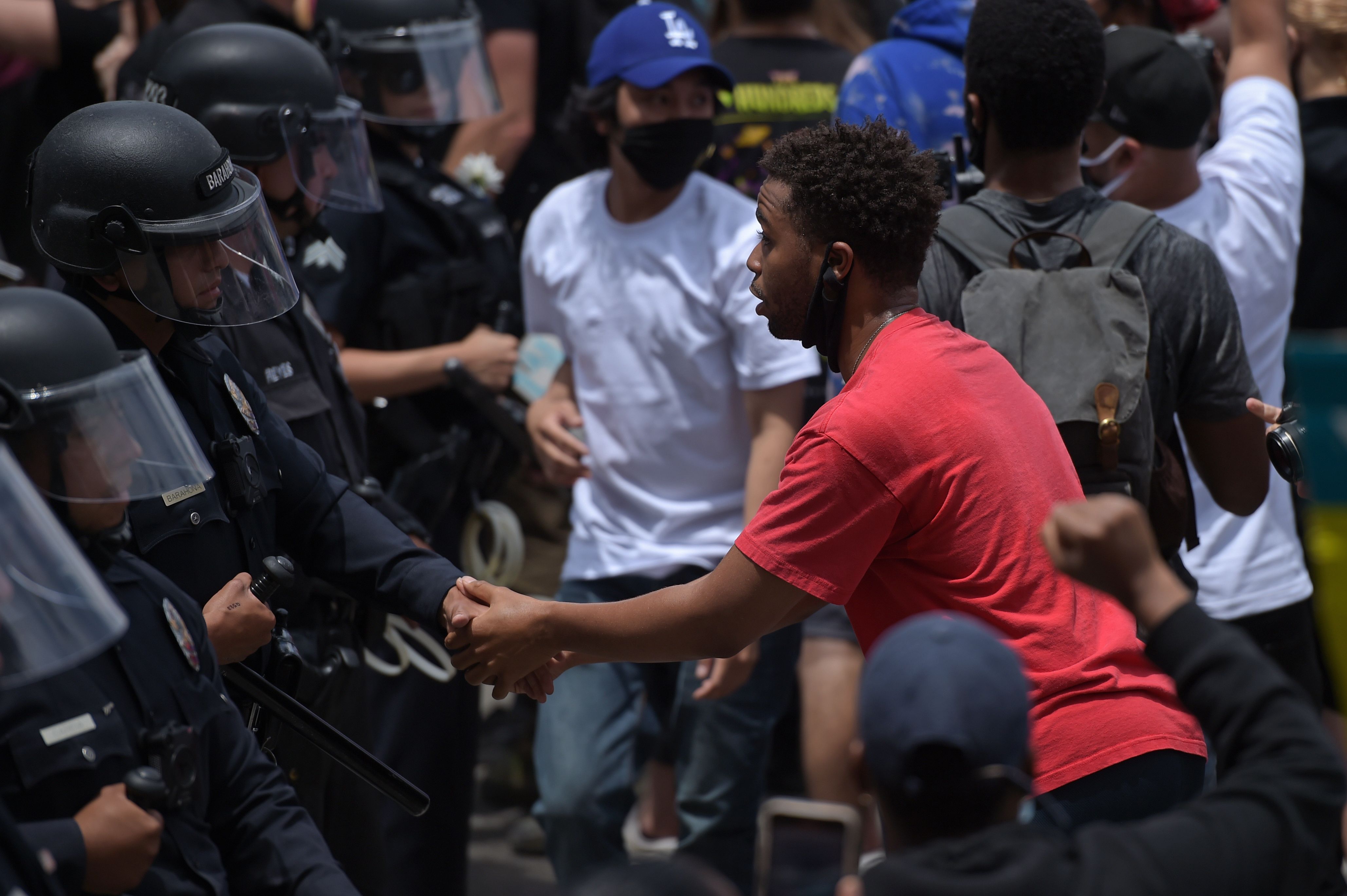 A protester shakes hands with an LAPD officer during a demonstration over the death of George Floyd in Hollywood, California on June 2, 2020. (Agustin Paullier/AFP via Getty Images)

“What the council decided to do was just cut,” DeRollo told The Daily Caller News Foundation.

“It’s like that old adage about carpentry: You measure twice, you cut once,” he continued. “They didn’t measure at all, they didn’t even cut. They came with a meat cleaver and just hacked away and said we’ll figure it out later.”

The most damaging cut to the department is the hiring reduction that the council approved, according to DeRollo. The amount of cadets the department can accept into its police academy will be halved, which will have ripple effects felt for years to come.

“It will take years to recover from that,” DeRollo said. “And it will result immediately with less officers patrolling the streets.”

“What that means simply is longer response times to emergency calls,” he added. “It means less time to do community-based policing like building relationships in neighborhoods. And it also will mean less ability to implement the training that everybody wants our officers to have.” 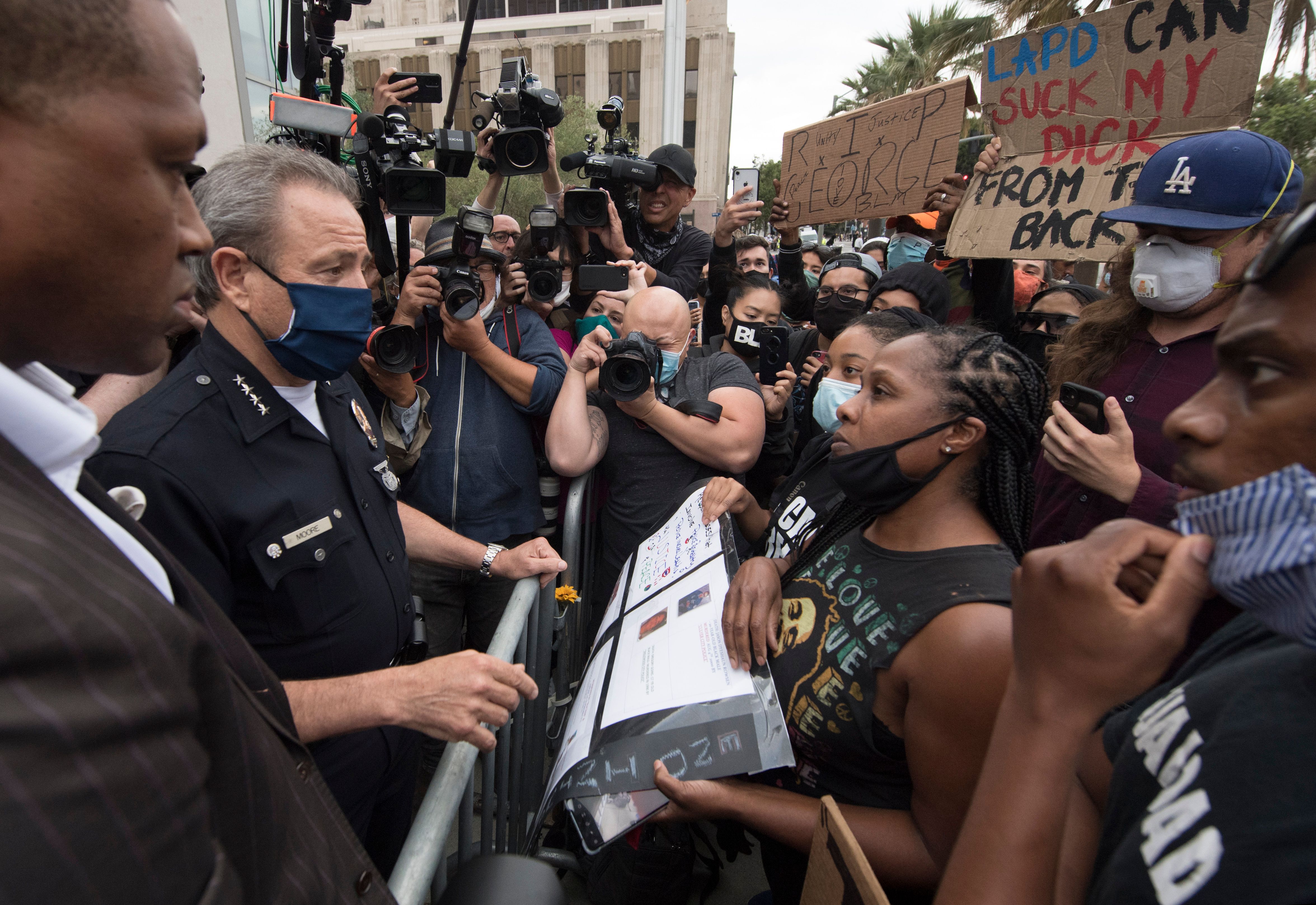 The Los Angeles Police Department loses about 500 officers annually due to retirements or moving to different police departments, DeRollo said. However, that loss is counterbalanced by the roughly 500 officers who graduate police academy and are moved to the department.

The police department will be staffed with 9,757 officers by next summer, the lowest amount since 2008, according to the LA Times. (RELATED: Joe Biden Sponsored Bill Protecting Cops Under Investigation Four Times As Senator)

The cuts to overtime pay could also have a major impact on the department, according to DeRollo. Because the city didn’t specify which areas of the department need to curb overtime, Chief of Police Michel Moore might be forced to cut back resources for key units.

“I’d be surprised if every major unit in the department was not impacted by that,” he said. “That’s the reality.”

Democratic Councilman Joe Buscaino, who voted against the cuts, said the police budget should have been increased to bolster its community policing unit. The department’s community policing program, which began in 2011, has been successful in reducing crime and increasing community trust in police, according to a May UCLA study. 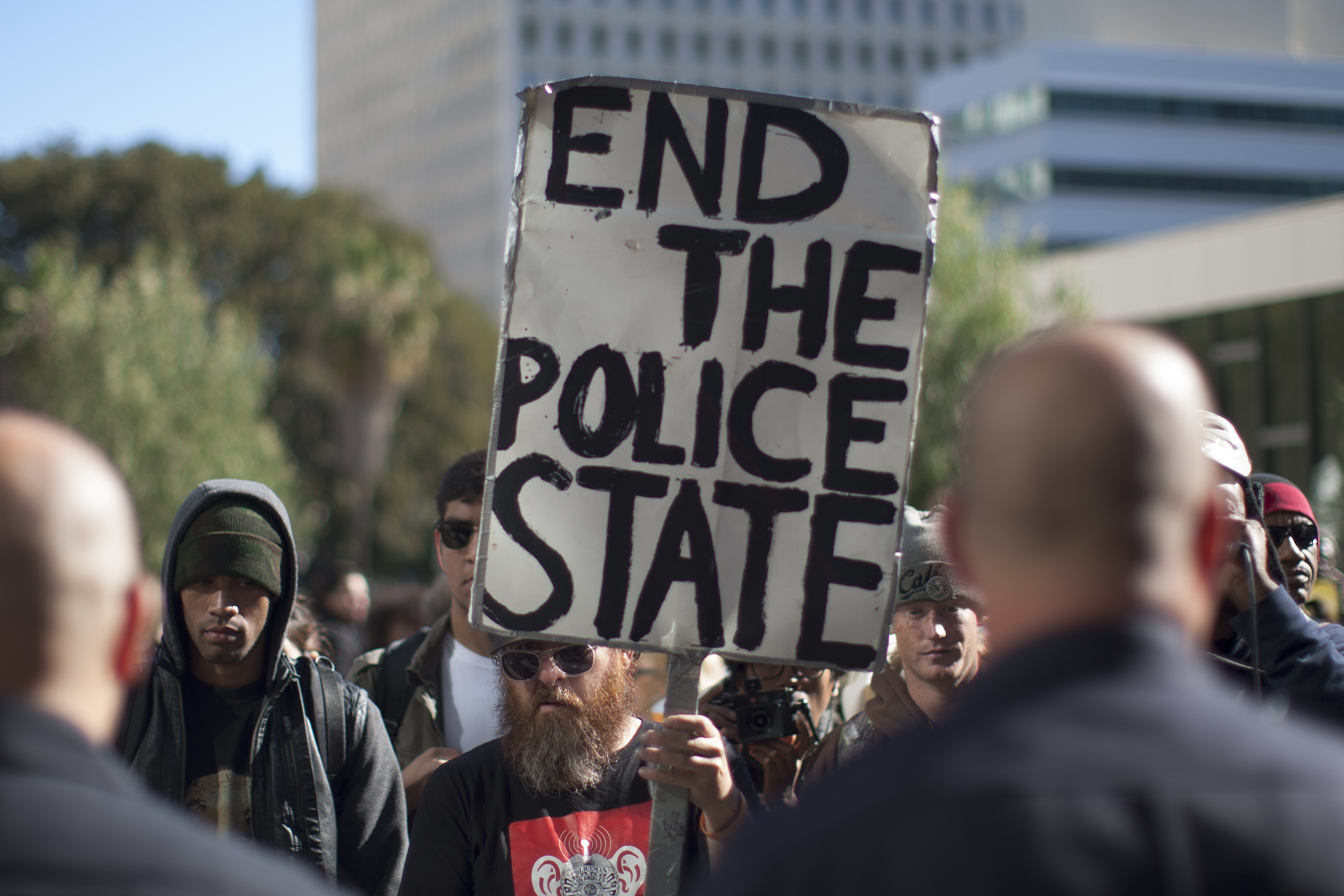 Protesters and police face off during a rally at Los Angeles Police Department Headquarters against the fatal police shooting of an unarmed homeless man on March 3, 2015. (Photo: David McNew/Getty Images)

“We were the enemy — pure and simple — if you had the LAPD uniform on, it was as if you had a target on your back. If there were reports of a shooting, officers were not supposed to come in without back-up,” said one officer interviewed in the study. “That’s all changed. The residents of this community want [the Community Safety Partnership] here, they want this community to be safe. They welcome us.”

“The bottom line is that the way things have been going is not working for our communities,” Democratic Councilman Herb Wesson tweeted after the council approved the measure. “I look forward to continuing this work alongside [Black Lives Matter-LA].”

Black Lives Matter-LA tweeted Monday that the Los Angeles Police Protective League “is not a union; it’s a gang.” 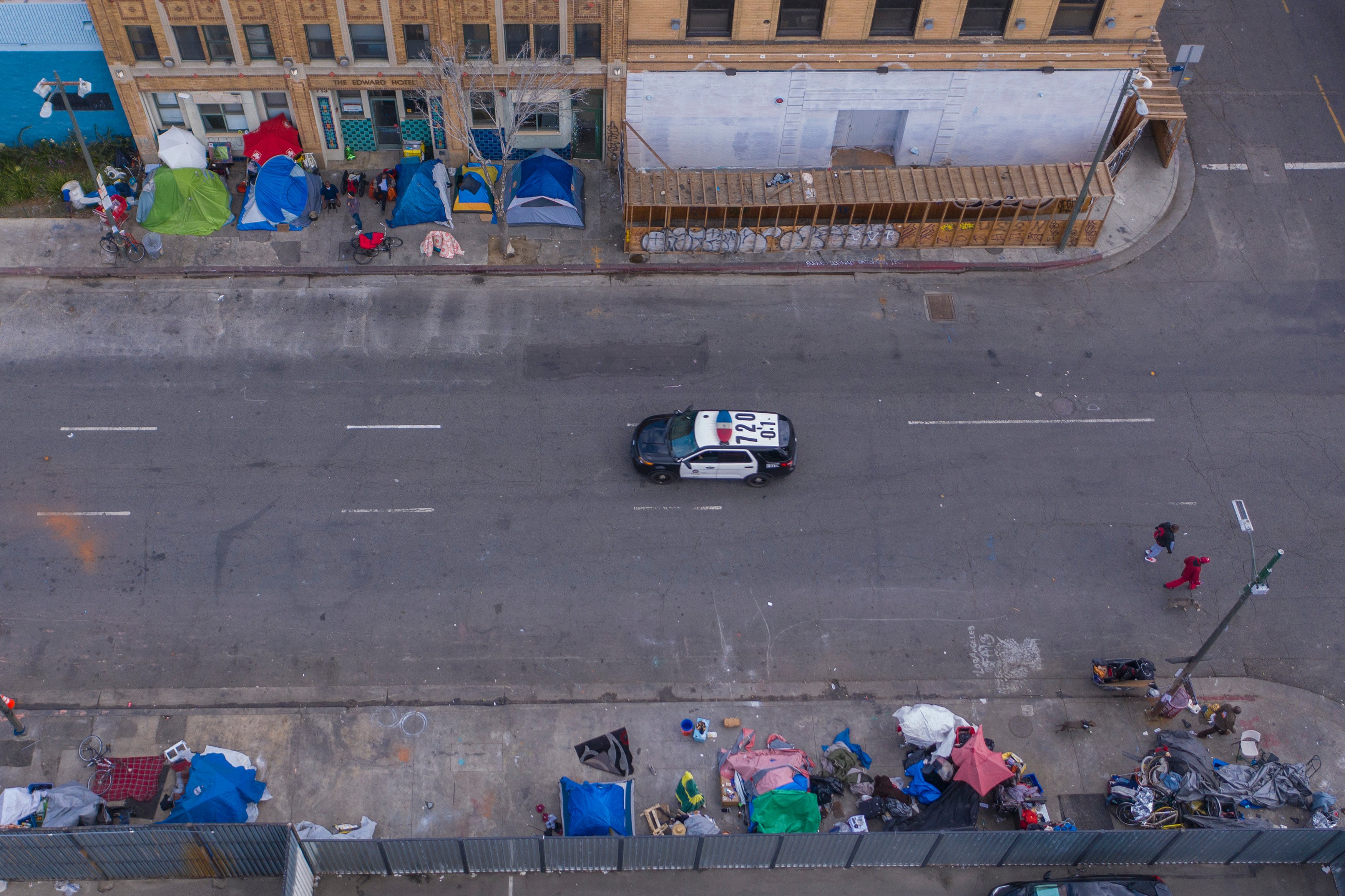 He added: “Domestic disturbance calls are seemingly benign until you get to the situation, knock on the door and you find out that, you know, the guy who’s beating his wife is on meth and he’s violent and out of control.”

The Los Angeles Police Department already has a mental health evaluation unit, which DeRollo says consists of plainclothes police officers who respond to incidents with mental health clinicians. However, this unit can only respond to about 25% of the relevant calls due to a lack of resources.