“Today marks six months of the Biden-Harris Administration. In six months, this Administration has fueled record-breaking job growth, vaccinated over 160 million people-and captured a lot of photos along the way,” the post stated.

“And what a disaster it has been!” one commenter said in response, receiving 792 likes by viewers of the post, according to Fox News.

“In just six months, the Biden administration has destroyed America,” one user claimed.

“This administration has destroyed our energy independence, dramatically increased the cost of living for hard working Americans, overseen historic inflation growth, saddled generations of our children with massive China owned debt, wasted our tax dollars in the invasion of illegal aliens-Biden-Harris are total screw ups,” another critic wrote, according to the outlet.

Biden has received bipartisan backlash for ending the construction of the Keystone XL Pipeline through executive action in an effort to reduce energy production. The administration has also overseen a 5% rise in inflation, the highest since 2008 when former President Barack Obama took office. (RELATED: POLL: Biden Approval Rating Slips Among Democrats)

Additionally, the administration has struggled with the ongoing migrant surge at the U.S.-Mexican border. U.S. Customs and Border Protection (CBP) apprehended over 188,829 migrants in June, a 5% increase from those encountered in May, the agency announced. Following fierce backlash from critics, Vice President Kamala Harris made a June 26 visit to the border after a long delay in going to the border. 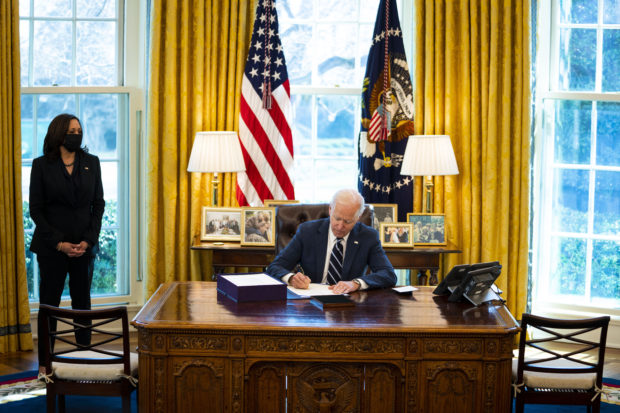 The post consisted of six photos that captured different moments throughout Biden’s presidency so far and touted the administration’s accomplishments in its caption, including the American Rescue Plan and the president’s participation in the G-7 summit.

Biden signed the $1.9 trillion American Rescue Plan into law on March 19 following its passage through the Senate with a 50-49 vote and no support from Republicans. The legislation provided $1,400 checks to citizens and billions in funding to small businesses and schools.

The president received criticism over his performance at the G-7 summit, a meeting held from June 11-13 with world leaders to address global affairs. Republican Florida Gov. Ron DeSantis said at the time that Biden was “leaving a lot of people behind” over his push to reduce global energy production.

In June, Biden’s approval rating fell below 50%. However, his spending policies, including the American Rescue Plan, remained popular with approval ratings above 60%.