The U.S. economy added 235,000 jobs in August and the unemployment rate fell to 5.2%, according to Department of Labor data released Friday.

The number of unemployed people decreased to 8.4 million, according to the Bureau of Labor Statistics report. Economists projected 720,000 Americans — roughly three times the actual number — would be added to payrolls prior to Friday’s report, The Wall Street Journal reported.

“Despite the delta variant, there is still an opening up of the service sector of the U.S. economy,” Nationwide Mutual Insurance Chief Economist David Berson told the WSJ. “While that started some months ago, it’s not nearly complete.” (RELATED: US Labor Shortage Surges To New Record High As Unemployment Remains Elevated)

Economists have warned that the delta variant of COVID-19 could impede the economic recovery that has taken place over the last several months. Coronavirus cases have surged since mid-July from around 17,000 per day to 153,000 per day, Centers for Disease Control and Prevention (CDC) data showed. 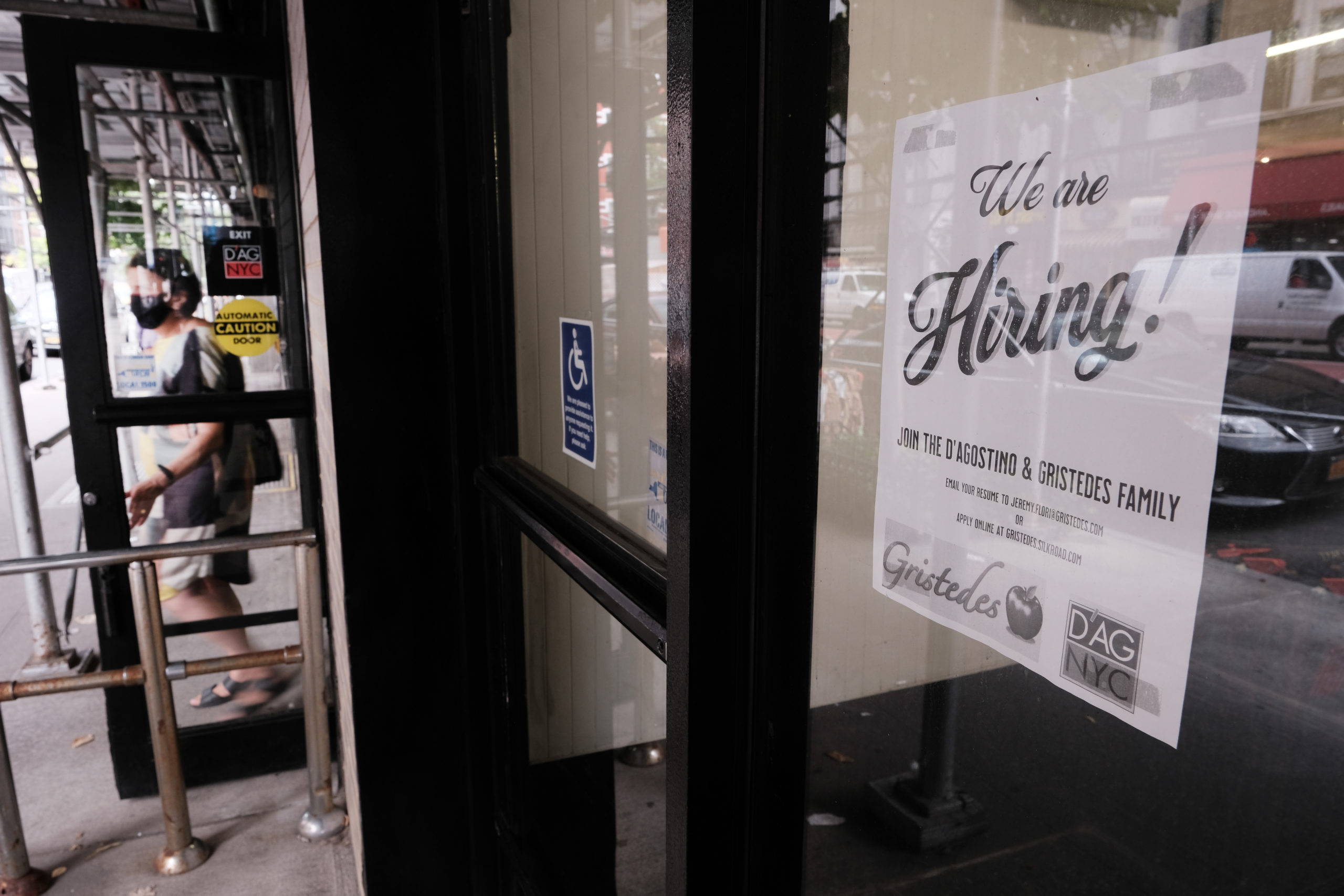 A hiring sign is displayed in a store window in New York City on Aug. 19. (Spencer Platt/Getty Images)

In July, the economy added 943,000 jobs, more than the 845,000 economists expected. The U.S. economy has added about 4.3 million jobs since January and, on Thursday, jobless claims sank to a new pandemic low.

Nevertheless, the economy is still approximately 5.5 million jobs short of its pre-pandemic level, according to Department of Labor data. In February 2020, 152.5 million Americans were employed, before COVID-19 lockdowns and restrictions caused a sudden loss of 20.7 million jobs.

“There’s no question that job growth of the first seven months this year has slowed down compared to the last seven months of 2020,” House Ways and Means Committee Ranking Member Kevin Brady told the Daily Caller News Foundation in an interview. “We know that the Biden jobs deficit is still nearly 300,000 fewer jobs than what he promised with that $2 trillion COVID stimulus.”

“Workers are still not coming back to work in the numbers that our main street businesses need to survive and to grow from there,” Brady said. (RELATED: ANALYSIS: Biden Keeps Making The Same Dubious Jobs Claim)

Brady noted that the expiration of the pandemic-related unemployment program, which currently gives out-of-work Americans $300 per week in addition to state benefits, could trigger job growth. The weekly unemployment boost is set to expire early next week.

Since June, 26 states have already withdrawn from the program, citing slowing job growth and increasing labor shortages. The number of unemployed individuals filing for jobless claims decreased in states ditching the program compared to those that have remained in it, a Daily Caller News Foundation analysis showed. 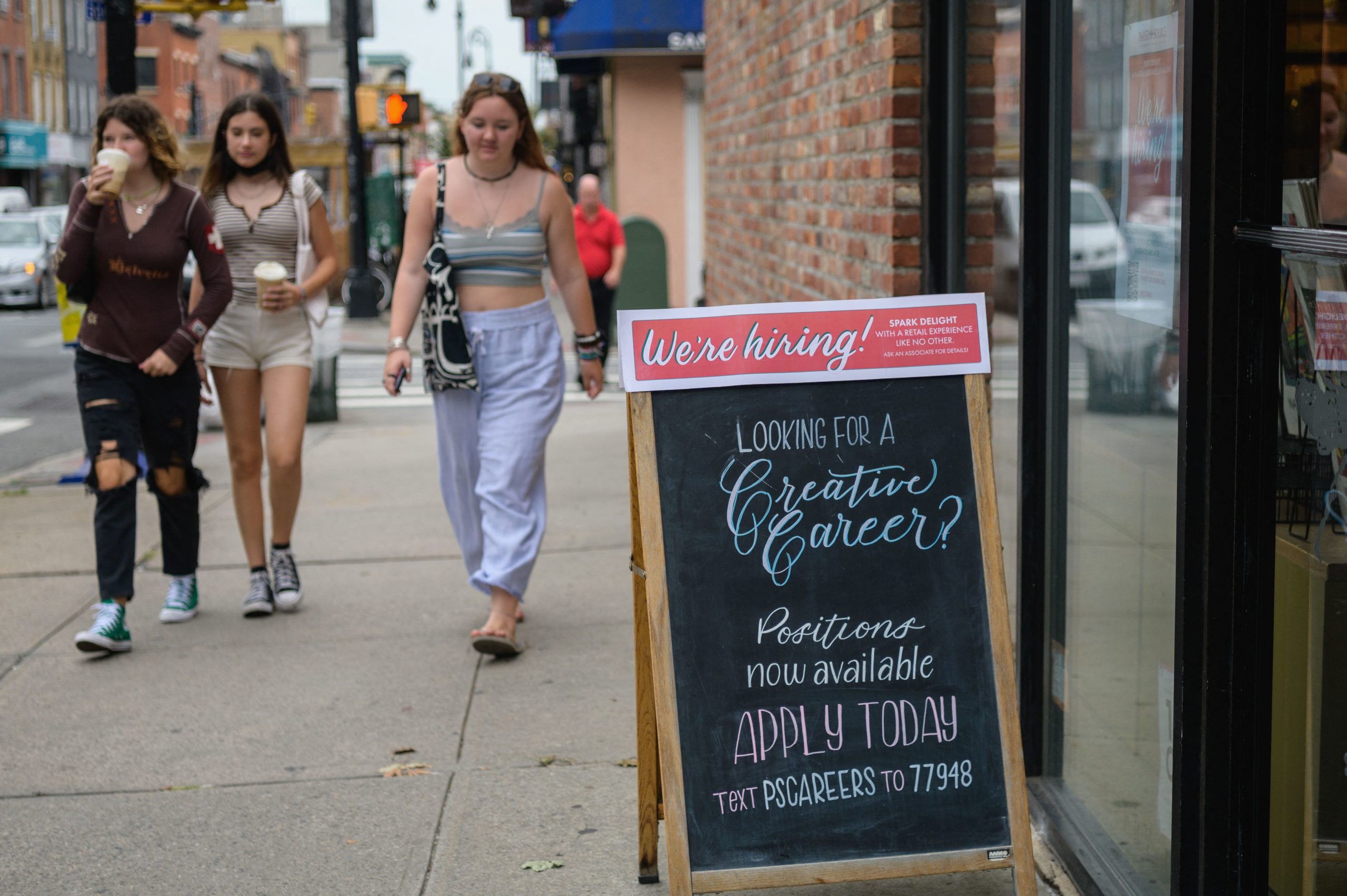 A group of young people walk past a ‘We’re hiring!’ sign posted at a store in New York City on Aug. 20. (Angela Weiss/AFP via Getty Images)

But the recent expansion of monthly child tax credits could act as a substitute for generous unemployment benefits and incentivize Americans to stay on the unemployment rolls, Brady told the DCNF.

“I still believe we won’t see as many people come off the sidelines as long as the government is promising child tax checks without work,” he said. (RELATED: Inflation Measure Surges Again, Hits New Three-Decade High)

Alfredo Ortiz, the president of small business advocacy group Job Creators Network, said he was concerned about the child tax credit, but also pointed to record inflation, the labor shortage, continued coronavirus restrictions on business and the impact of the delta variant as other pressing concerns.

“There is concern from small businesses about future hiring,” Ortiz told the DCNF. “They felt good about the beginning of the year, but now with the delta variant, additional masking requirements and other regulations, they’re more concerned about the future than they were in the past surveys that we’ve done.”

“Even though wages went up 4%, we know inflation went up 5.4%,” he continued. “So, in real dollars, people are actually making less than they did before. This is a real issue.”