President Donald Trump may keep his faith to himself, but he fights for religious liberty, Eric Trump told the Daily Caller News Foundation.

“We’re never ones to tell people how to practice religion,” Eric Trump told the DCNF in a Tuesday evening interview. “But my father has had to protect it.”

“We were a family that took religious freedom and took religion seriously,” Trump said. “We didn’t wear it on our shoulders. My father always said that. A lot of times you have people who go out and pander, we were never that family.” (RELATED: ‘An Existential Threat’: Catholic Group Launches $9.7 Million Campaign To ‘Expose Biden’s Anti-Catholic Record’)

The Trump family always went to church on Christmas Eve, Trump told the DCNF, adding that he and his brother Donald Trump Jr. went to Catholic school where they took communion. The family also spent “every traditional kind of Christian holiday together,” he said.

“In the early years I was always at my grandparents house in Queens and we’d have the whole family over there,” he said. “It was a very kind of traditional setting. You had the kids table and you had the adults table. We obviously all sat at the kids’ table and it was great. I remember those cold, cold days in New York state and going into that house.” 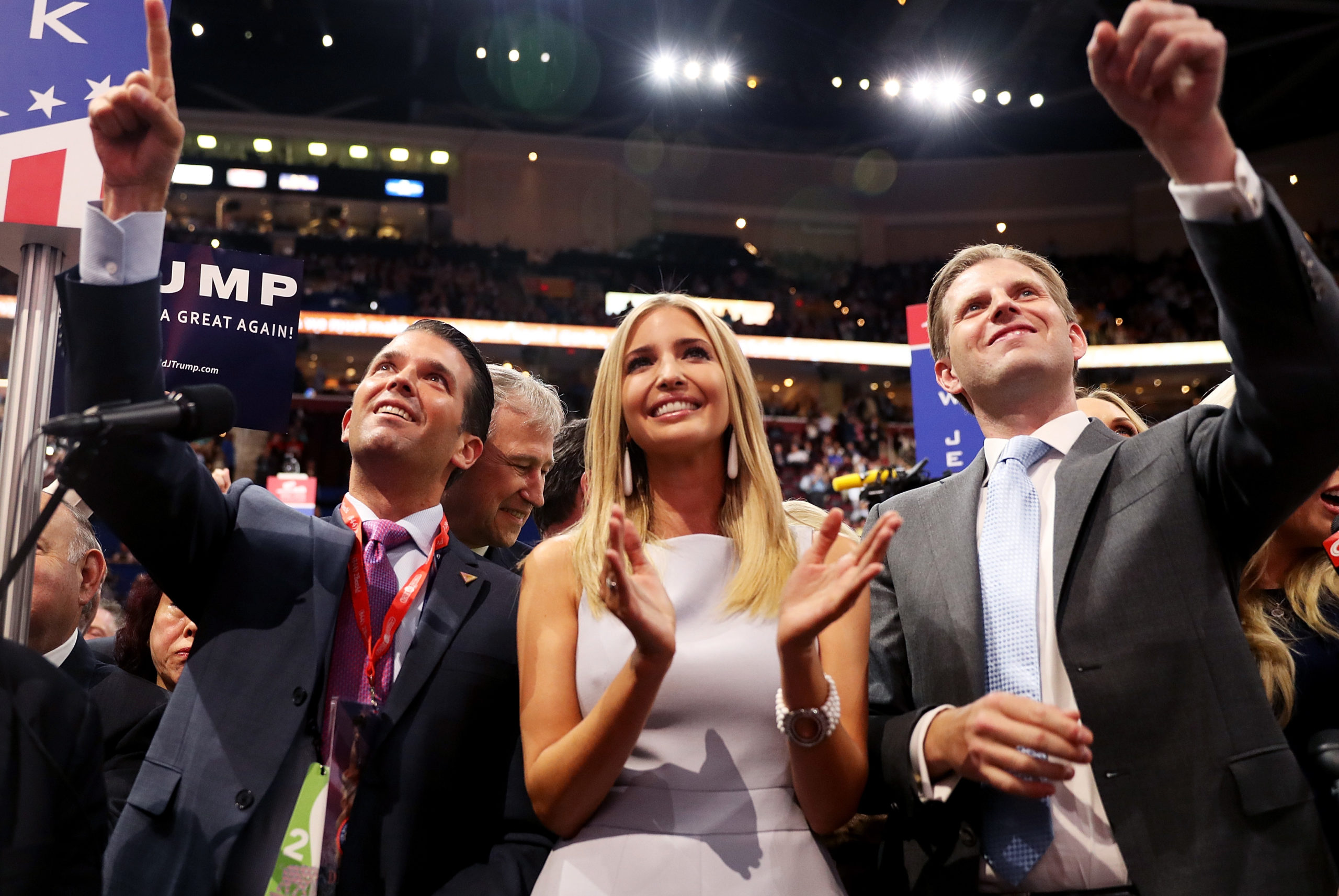 Donald Trump Jr. (L), along with Ivanka Trump (C) and Eric Trump (R), take part in the roll call in support of Republican presidential candidate Donald Trump on the second day of the Republican National Convention on July 19, 2016 at the Quicken Loans Arena in Cleveland, Ohio. (Joe Raedle/Getty Images)

Critics of the president have attacked Donald Trump’s personal faith, particularly after the president strode across Lafayette Square June 2 and held a bible aloft in his hand as he posed for a photo in front of St. John’s Church. The church was covered in graffiti and charred from fires after nights of violent rioting in the nation’s capitol.

The scene sparked a backlash when journalists and others alleged that police used tear gas to clear the president’s path to St. John’s. The city’s curfew was not set to go into effect for another hour, and Daily Caller reporters said the protests in D.C. that night were largely peaceful.

The United States Park Police said that officers used irritants to disperse the crowd, such as smoke canisters and pepper balls. The U.S. Secret Service initially denied that any agents used tear gas or pepper spray before announcing that “an agency employee used pepper spray” in response to “an assaultive individual.”

“Is that your Bible?” a reporter asked the president, the New York Times reported in a story that questioned what the Bible actually meant to the president. “It’s a Bible,” Trump reportedly replied.

Eric Trump said he was “really proud” of his father that day, calling the historic St. John’s church “a symbol of how wonderful this country is” and adding that the church, where former presidents like Abraham Lincoln have prayed, “represents the best of America.”

“That made me proud that my father stuck up for that and held up that Bible,” he said. “And I think that was a great day for the country. It was a beautiful moment for this country. I think it was a moment of healing for this country, as people just couldn’t believe the behavior of these homegrown terrorists.”

US President Donald Trump holds a Bible while visiting St. John’s Church across from the White House after the area was cleared of people protesting the death of George Floyd June 1, 2020, in Washington, DC. (BRENDAN SMIALOWSKI/AFP via Getty Images)

Trump described his father’s faith as “strong.” (RELATED: Here’s How The DOJ Has Fought Against Orders Limiting Religious Services During The Pandemic)

“It’s his own relationship,” Trump said, emphasizing that his father believes in God and has always valued his faith, but that “some people wear” faith differently and Donald Trump “keeps his faith to himself a little bit.”

Though the president may keep his faith to himself, his son added, “there’s probably never been somebody that has done so much to protect religious liberty” at a time when religion in the United States is under attack.

Eric Trump cited attacks on tax-exempt statuses for churches and told the DCNF that his father normalized saying “Merry Christmas” in the White House again. (RELATED: Trump Threatens To Override Governors If They Do Not Open Churches) 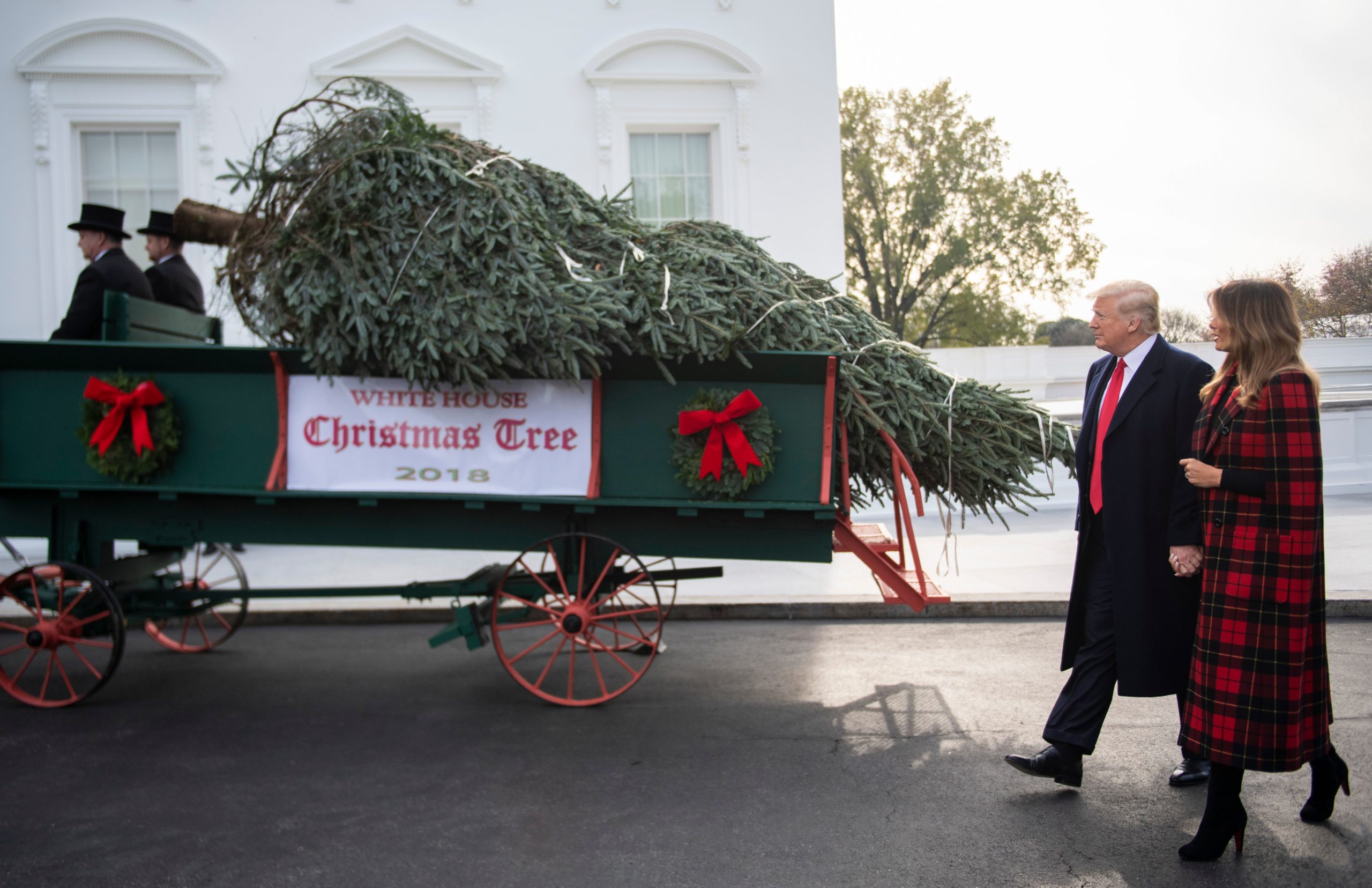 “My father never understood why you had this attack on faith that you do in this country,” he said. “You have the new kind of Democratic proclamation, where they’ve come out and kind of said that they were the party of the atheists, you see during the DNC where they took out ‘under God’ and the Pledge of Allegiance.” (RELATED: These States Banned Religious Gatherings But Kept Liquor Stores Open)

He continued: “You see these constant crusades to get rid of the Pledge of Allegiance in schools in this country and you see them every single day, try and take ‘In God We Trust off of our currency.’ You even see many states right now that are perfectly fine allowing liquor stores to be open, but church has to be closed.”

Many of the problems occurring throughout the United States may stem from a lack of faith, Eric Trump suggested, noting that he was referring to all faiths and not merely Christianity.

“I think if you had a little bit more faith in society, you probably wouldn’t see as many problems as you have in some of these places,” he said.