Despite numerous reports detailing the horrific conditions of China’s so-called “reeducation” centers for Uighurs, a new report from the BBC documents just how distressing life is in one of the world’s most secretive camps.

Tursunay Ziawudun lived in one of China’s internment camps in the Xinjiang region for nine months, according to the BBC. Ziawudun is just one of approximately one million Uighurs forced to live in the camps.

While accounts detailing the horrors are rare, Ziawudun was able to flee Xinjiang to share her story.

During her first stint in detention, Ziawudun said it was comparatively easier with decent food and access to her phone, according to the report. After a month, however, she had developed a stomach ulcer and was released. After her release, her husband, who is a Kazakh and had not been sent to the camp with her, was allowed to return to Kazakhstan to work. Authorities, however, kept Ziawudun’s passport, trapping her in Xinjiang.

Then on March 9, 2018, Ziawudun was told to report to a local police station because she needed “more education,” according to the BBC.

Arriving at the same facility where she was first held, Ziawudun immediately noticed something had changed, with buses offloading new detainees “non-stop,” according to BBC. Jewelry was confiscated and women had to hand over any and all belongings, according to the report.

The first two months were filled with propaganda programs but police soon began interrogating Ziawudun about her husband, eventually knocking her to the floor and kicking her in the abdomen when she wouldn’t answer, according to the report.

“Police boots are very hard and heavy, so at first I thought he was beating me with something. Then I realized he was trampling on my belly. I almost passed out–I felt a hot flush go through me,” she told the BBC.

A camp doctor thought she might have a blood clot while her cellmates reported to the guards that she was bleeding. All concerns were dismissed by the guards, according to the report.

She said women were taken from their cells “every night” and raped by one or more masked Chinese men dressed in suits, according to the report. On three separate occasions, Ziawudun herself was gang-raped by two to three men, the BBC reported. She was also reportedly tortured during other instances.

During one instance in May of 2018, Ziawudun and a cellmate, a woman in her twenties, were taken out of their cell during the night and presented to a man in a mask, according to the report.

“As soon as she went inside she started screaming. I don’t know how to explain to you, I thought they were torturing her. I never thought about raping them.” 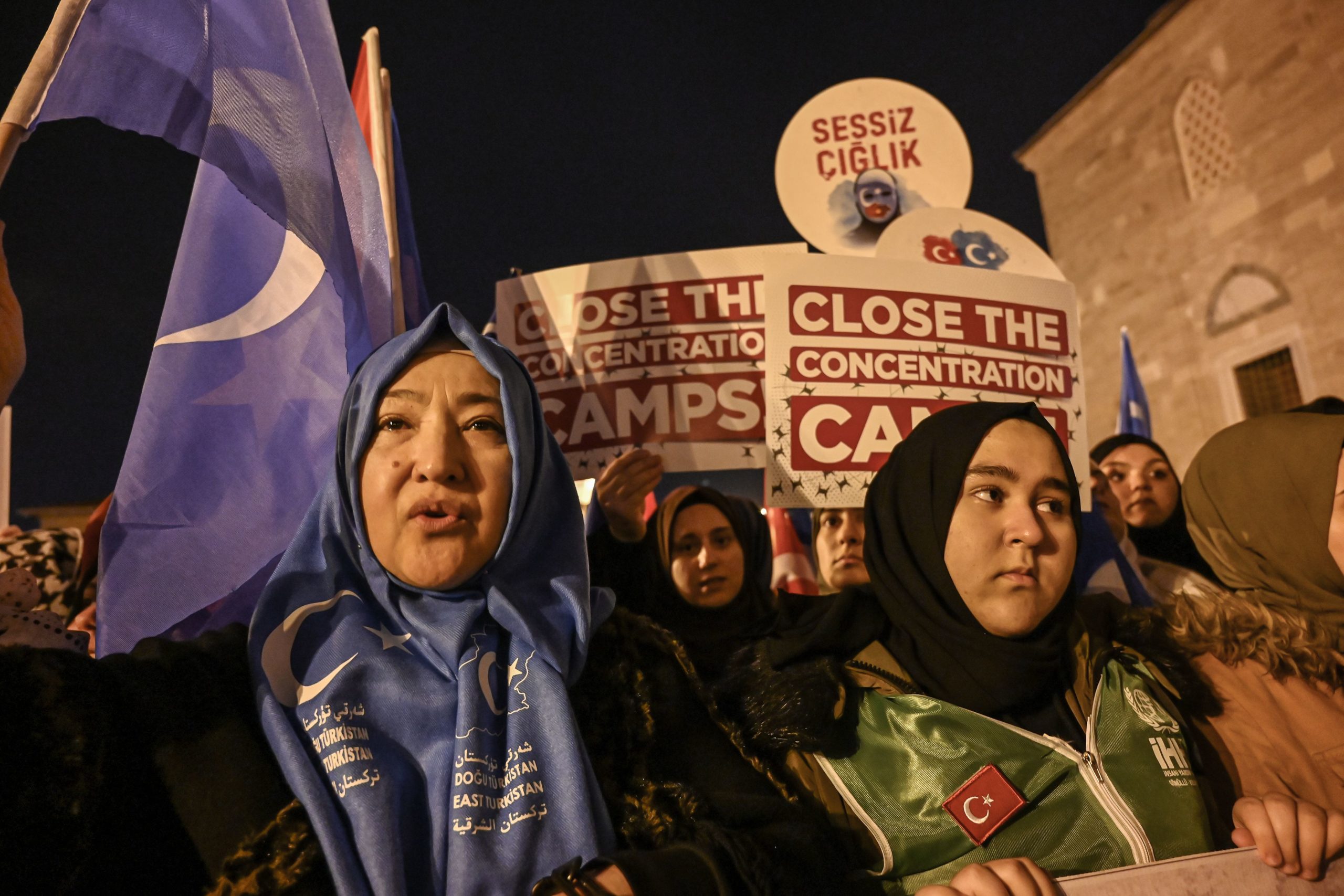 Supporters of China’s Muslim Uighur minority wave the flag of East Turkestan and hold placards on December 20, 2019 during a demostration at Fatih in Istanbul. –  (OZAN KOSE/AFP via Getty Images)

The woman who had brought Ziawudun and her cellmate told one of the men about Ziawudun’s bleeding, according to the report. A Chinese man ordered the lady to take Ziawudun to the dark room.

“The woman took me to the room next to where the other girl had been taken in,” Ziawudun said, according to the report. “They had an electric stick, I didn’t know what it was, and it was pushed inside my genital tract, torturing me with an electric shock.”

The torture that night ended when the woman who had brought her to the room again informed guards of her medical condition, according to the report. Her cellmate was returned roughly an hour later. (RELATED: China ‘Virtually’ Admitted They Are Committing Genocide, Asian Studies Expert Says)

“The girl became completely different after that, she wouldn’t speak to anyone, she sat quietly staring as if in a trance,” Ziawudun said, according to BBC. “There were many people in those cells who lost their minds.”

A Chinese language teacher, Qelbinur Sedik, was brought into the camps and forced to teach the detainees language lessons, according to the BBC. She’s since fled China to share her experience.

Sedik told the BBC that the women’s camp was “tightly controlled” but that there were obvious signs of rape. Needing to confirm what she already knew, she asked a Chinese camp policewoman whether she knew anything about rape.

“I went to the courtyard, where there were not many cameras. [The policewoman] said ‘Yes, the rape has become a culture. It is gang rape and the Chinese police not only rape them but also electrocute them. They are being subject to horrific torture.'”

In separate testimony to the Uighur Human Rights Project, Sedik spoke about hearing of an electric stick inserted inside women as a form of torture, just as Ziawudun had described, according to the BBC.

“The screams echoed throughout the building,” she told the outlet. “I could hear them during lunch and sometimes when I was in class.”

Gulzira Auelkhan is a Kazakh woman from Xinjiang who was also detained for 18 months in the internment camp. Auelkhan was responsible for stripping Uighur women naked and then handcuffing them as they waited for Chinese men to arrive, according to the BBC.

“My job was to remove their clothes above the waist and handcuff them so they cannot move,” she told the BBC, crossing her wrists behind her head to simulate what she would do. “Then I would leave the women in the room and a man would enter– some Chinese man from outside or policeman. I sat silently next to the door, and when the man left the room I took the woman for a shower.”

Auelkhan said the Chinese men “would pay money to have their pick of the prettiest young inmates.” Auelkhan said there was an organized system of rape, according to the BBC.

But not all women who were taken away from their cells at night returned, Ziawudun told the BBC. Those who did return were told not to tell anyone what happened in those cells and were threatened, according to the report.

“You can’t tell anyone what happened, you can only lie down quietly,” she told the BBC. “It is designed to destroy everyone’s spirit.”

China began detaining Uighurs in 2017, according to Human Rights Watch. There are roughly 11 million members of the religious minority in China and at least one million detainees in the camps, according to BBC.

The Associated Press (AP) described China’s internment of Uighurs as a “demographic genocide.” An investigation found that China forces Uighurs to undergo forced abortions, birth control and forced labor, according to the AP.