House Democrats are preparing to force a vote on Thursday that would strip Georgia Republican Rep. Marjorie Taylor Greene from her committee assignments unless House Republican leadership does so first.

House Majority Leader Steny Hoyer said on Wednesday that he spoke with House Minority Leader Kevin McCarthy, suggesting that he was leaning towards not removing the congresswoman from her committees despite her past controversial remarks.

The proposal, sponsored by Florida Democratic Rep. Debbie Wasserman Schultz, would remove Greene from the Budget Committee and Education and Labor Committee for the remainder of the 117th Congress.

McCarthy said that he met with Greene on Tuesday evening, but did not make any decisions regarding her fate. 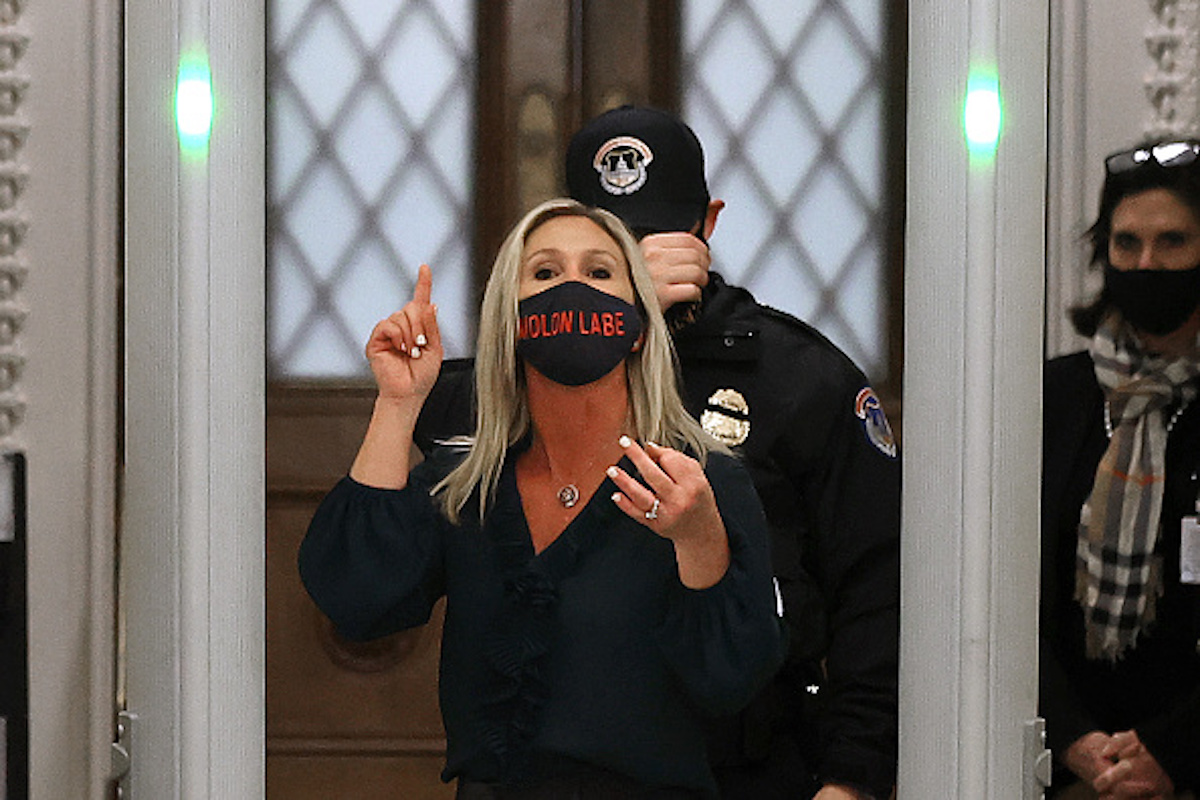 Rep. Marjorie Taylor Greene yells at journalists after setting off the metal detector outside the doors to the House of Representatives Chamber on January 12, 2021 in Washington, DC. (Chip Somodevilla/Getty Images)

Democrats and some Republicans have slammed Greene’s past remarks, which have been received as anti-Semitic and racist. Greene has also expressed support for the baseless QAnon conspiracy, questioned whether a plane actually hit the Pentagon on 9/11 before later admitting that it did, “liked” calls Facebook to execute House Speaker Nancy Pelosi and FBI agents and said that Jewish space lasers were the reason for the catastrophic wildfires witnessed in the western United States. (RELATED: Marjorie Taylor Greene Falsely Accused Two Congresswoman Of Supporting Sharia Law In Falsity-Filled Video)

Democrats have said her comments are justification for why she should be kicked off the Education Committee, and some have supported a resolution seeking to expel her from Congress.

Senate Minority Leader Mitch McConnell released a statement on Tuesday sharply criticizing Greene, saying that her comments were a “cancer” on the Republican Party and for the entire United States.

“Somebody who’s suggested that perhaps no airplane hit the Pentagon on 9/11, that horrifying school shootings were pre-staged, and that the Clintons crashed JFK Jr.’s airplane is not living in reality,” he said.

Still, McCarthy may ultimately decide to strip Greene of her committees in an effort to prevent his caucus from having to take a potentially disastrous political vote. The Republican leader took similar actions in January 2019 against former Iowa Rep. Steve King, stripping him of his assignments after he questioned why white supremacy was bad in an interview with The New York Times and lost his race for reelection to a fellow Republican last June.