With a united NATO alliance key to deterring a Russian invasion of Ukraine, former Trump administration officials told the Daily Caller News Foundation that President Joe Biden needs to stop playing nice with Germany, which has been reluctant to spurn Moscow.

Amanda Rothschild, former senior adviser on the Policy Planning Staff at the U.S. Department of State, told the DCNF that Germany likes “to portray themselves as being a moral leader” but tends to act in its own self-interest.

The German government has thus far ruled out any arms exports to Ukraine, while its new Chancellor, Olaf Scholz, has been vague on whether shuttering the Nord Stream 2 pipeline, an undersea gas pipeline with Russia, would be part of any sanctions against the regime, The New York Times reported.

“With their legacy in the Holocaust, World War II, you would think of all countries they would be committed to taking a stronger stance,” Rothschild said. “They haven’t been, in a leadership role, in that capacity.” (RELATED: Russian Media Attempts To Convince Citizens They Live In ‘The Most Peace-Loving Country’)

Creating friction between his adversaries is a strategic move by Russian President Vladimir Putin, Nathan Sales, former acting Under Secretary for Civilian Security, Democracy, and Human Rights at the U.S. Department of State, told the DCNF.

“What Putin is trying to do is play divide and conquer. He loves to pit NATO allies against each other,” Sales said. “And if there is any country that is the weakest link, that’s where he’s going to focus his energy and he’s going to try and break it.” 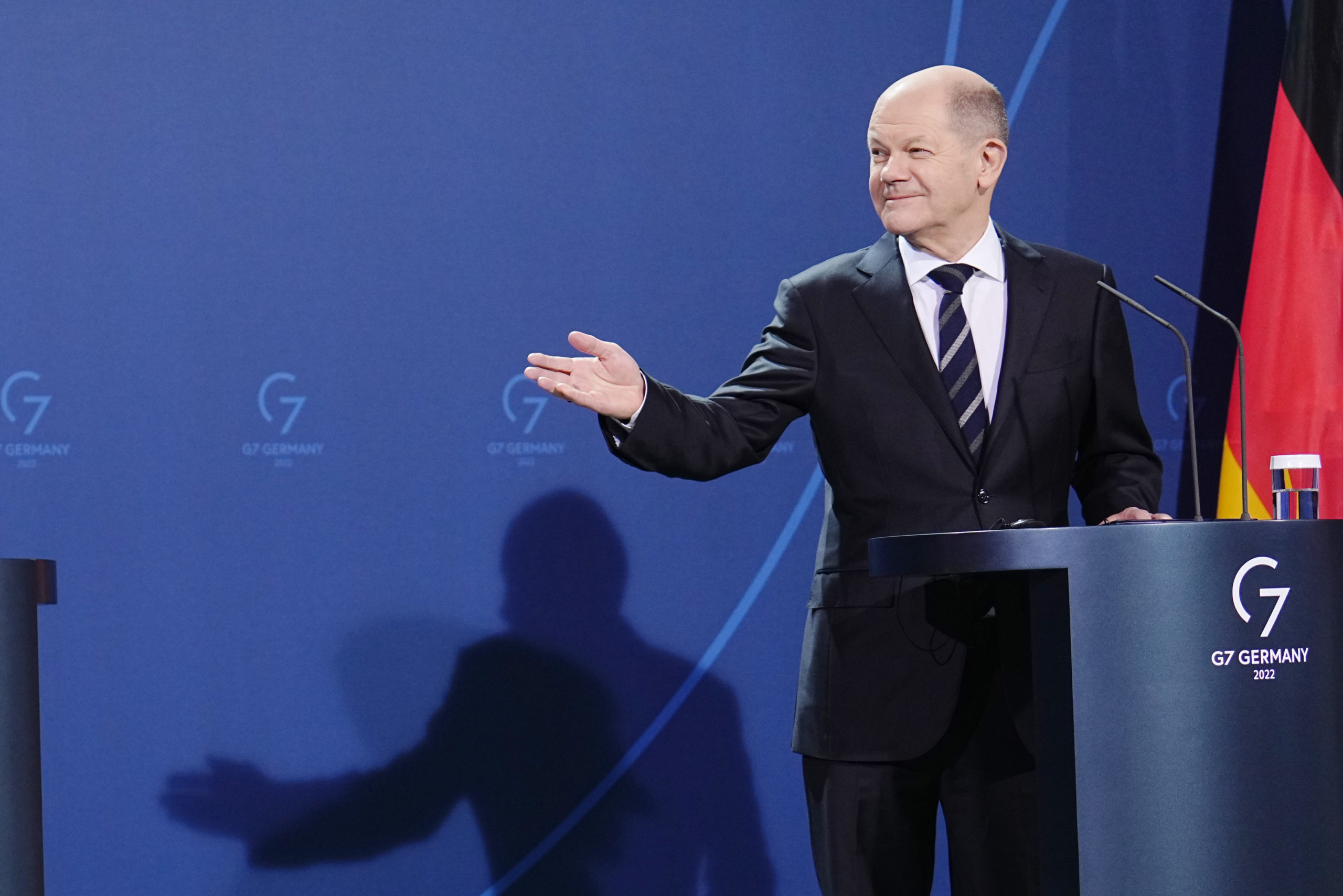 German Chancellor Olaf Scholz during a joint press conference with French President Emmanuel Macron ahead of talks at the Chancellery on January 25, 2022 in Berlin, Germany. (Photo by Kay Nietfeld – Pool/Getty Images)

Germany’s energy dependence on Russia, particularly when it comes to Nord Stream 2, is what makes it more reluctant to take a stronger stance against it, even as Ukraine’s sovereignty is threatened, the former officials said. The pipeline aims to double the volume of natural gas exported directly to Germany, CNBC reported.

“Because of energy policy decisions that Germany has made, it has found itself in a position where it is more dependent on Russian energy than ever before, not less, which is the direction it should be heading,” Sales told the DCNF.

In a statement to the DCNF, Nikki Haley, former ambassador to the U.N., said she once confronted the German ambassador about Nord Stream 2.

“Tell me why this is good for our alliance,” she recalled saying. “He couldn’t answer the question.”

Sales emphasized the U.S. could help reverse the reliance Germany has on Russian energy, citing how the Trump administration negotiated with Berlin to secure the construction of a liquefied natural gas (LNG) terminal “to receive increased shipment of American natural gas” in 2018. The U.S. became the top exporter of LNG in the world in 2022, CNN reported.

Biden, however, waived sanctions on Nord Stream 2 in what was largely seen as an effort to forge a better relationship with Germany. Rothschild said the new administration only achieved what she called a “superficial friendship,” where both countries compliment each other in public but fail to accomplish any “substantive” working relationship.

“The idea that it’s a positive outcome if we’re just not criticizing each other publicly is, I think, shortsighted,” she added. (RELATED: White House Pushes Back On Report That Biden Told Ukraine Their Capital Could Soon Be ‘Sacked’)

Haley argued Biden needed to “publicly call out Germany for their conflicts of interest” and not let it dictate what NATO can and cannot do. “Tough love will go a long way. If not, the world will continue to walk all over us,” she said.

Biden will host Scholtz at the White House on Feb. 7 to discuss the escalating situation between Russia and Ukraine. The Kremlin has amassed up to 130,000 troops along Ukraine’s border, though it has denied it plans to invade.

The State Department warned Russia not to invade Ukraine on Jan. 26, with spokesperson Ned Price telling NPR the Nord Stream 2 “will not move forward” if it does, but questions remain on whether the U.S. has the power to stop the pipeline.

Rothschild said she wished the Biden administration would be more specific in its warnings to Russia, as “credible threats” are necessary for deterrence. She also argued Biden should have continued former President Donald Trump’s lead by sanctioning the pipeline. 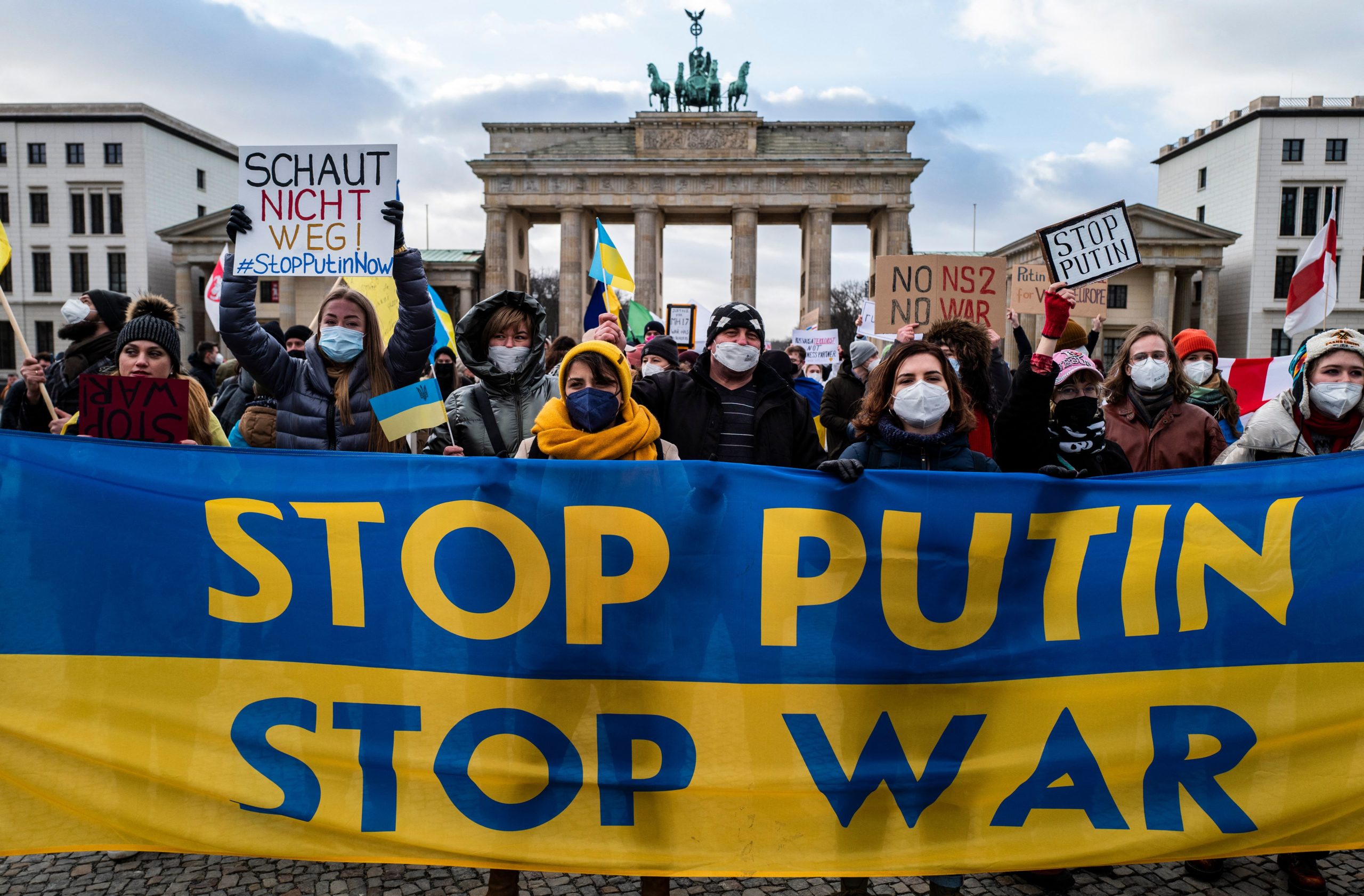 Demonstrators display a banner in the colours of the Ukrainian flag reading “Stop [Russian President] Putin, Stop war” during a protest at Berlin’s Brandenburg Gate on January 30, 2022. (Photo by JOHN MACDOUGALL/AFP via Getty Images)

Senate Democrats blocked a bipartisan bill that would have reimposed sanctions on Jan. 13. Kentucky Sen. Rand Paul was the only Republican to vote against it.

“The mainstream media should be asking Democrats about the no-win situation they’ve put America in when they voted down the Nord Stream 2 sanctions bill,” Haley said. “We had a chance to put actions behind our words and hit Putin where it hurts the most. We have to step up and be leaders again, or the world will walk all over us.”

“Biden’s weakness is exhausting,” she added. “Deterrence means using sanctions to stop Putin now, not after the damage is done.”

Sales concurred that Putin likely sees “weakness in Washington,” alongside a “fractured NATO alliance,” as proof he can get away with more aggressive actions.

A State Department spokesperson told the DCNF in a statement that “the fact is that gas is not currently flowing through the Nord Stream 2” means both the U.S. and Germany have leverage over Russia.

“To be clear, it is not leverage for Putin,” the spokesperson said. “The Administration continues to oppose Nord Stream 2 as a harmful Russian geopolitical project that is a bad deal for Ukraine and for Europe.”

“These measures, together with Germany’s implementation of its commitments under our July 2021 Joint Statement on Support for Ukraine, European Energy Security, and Our Climate Goals reduce the risks an operational Nord Stream 2 pipeline would pose to European energy security and to the security of Ukraine and frontline NATO and EU countries,” the spokesperson said.