On Thursday, the global price of oil surged past $100 per barrel for the first time in nearly eight years after Russia unleashed a full-scale offensive against Ukraine. Oil prices are the largest factor in determining gas prices for fossil fuel companies.

Russia provided more oil to the U.S. than any other country except Canada between January 2021 and November 2021, U.S. Energy Information Administration data showed. The country, which exported nearly 65% of the 10.5 million barrels of crude oil per day it drilled in 2020, is Europe’s largest oil supplier as well.

On Thursday, President Joe Biden unveiled another round of economic sanctions targeting Russia along with Western allies. The president acknowledged during remarks at the White House that energy costs, including pump prices, may increase as a result of the sweeping sanctions package, but he said it was critical to respond aggressively to Russia. (RELATED: Biden Administration Stays Silent On Major Oil Drilling Sale After Fossil Fuel Industry Appeals Ruling)

“API condemns Russia’s invasion into Ukraine, and American natural gas and oil producers have a critical role to play in supporting our European allies with access to a stable supply of reliable and affordable energy,” American Petroleum Institute (API) President and CEO Mike Sommers said in a statement.

“With both geopolitical tensions and energy costs rising, American energy leadership can serve as a stabilizing force while strengthening global energy security,” Sommers said. “Our industry is committed to working with the administration to do everything possible to minimize any impacts on U.S. consumers while supporting our allies overseas.” 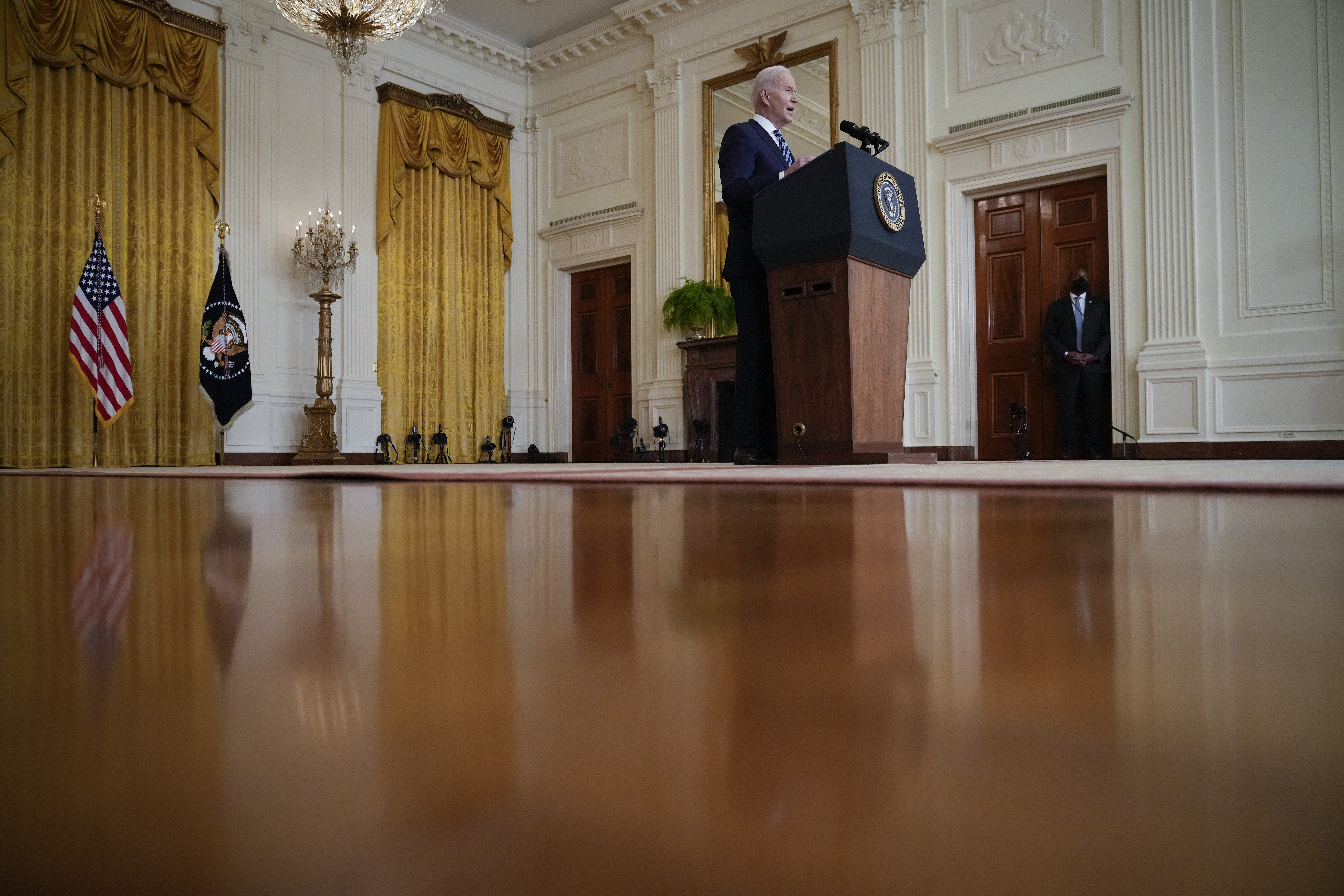 API represents around 600 different energy firms, making it one of the largest U.S. oil and gas industry groups. Another major industry group, the Independent Petroleum Association of America (IPAA), also stressed the need for domestic production, saying it would benefit both the interests of the U.S. and its allies.

“The United States has shown its global energy dominance over the past decade. Unfortunately, this has been threatened by the current Administration’s policies against domestic natural gas and oil production,” IPAA COO Jeff Eshelman told the Daily Caller News Foundation in a statement. “Make no mistake, natural gas and oil production here at home benefits not only our nation, but also our worldwide allies. For America, it means less reliance on oil imports from unfriendly countries.”

Additionally, Power the Future, a group that advocates for U.S. energy independence, wrote a letter to the White House on Thursday, urging the administration to reverse course on its energy policies. The letter, obtained by the DCNF, said the president’s energy agenda has proven to be a failure.

Since taking office, Biden has waged a war on fossil fuels, nixing the Keystone XL oil pipeline, ditching an oil drilling project in Alaska, staying silent on a court ruling that prohibited an offshore drilling lease in the Gulf of Mexico, attempting to ban new drilling leases on federal lands and making it harder for utilities to gain approval for natural gas projects.

The U.S. is set to return to being a net importer of crude oil in 2022 under the Biden administration, according to federal projections. The U.S. became a net exporter of total energy in 2019, factoring in both coal and natural gas trade, and a net oil exporter in 2020. 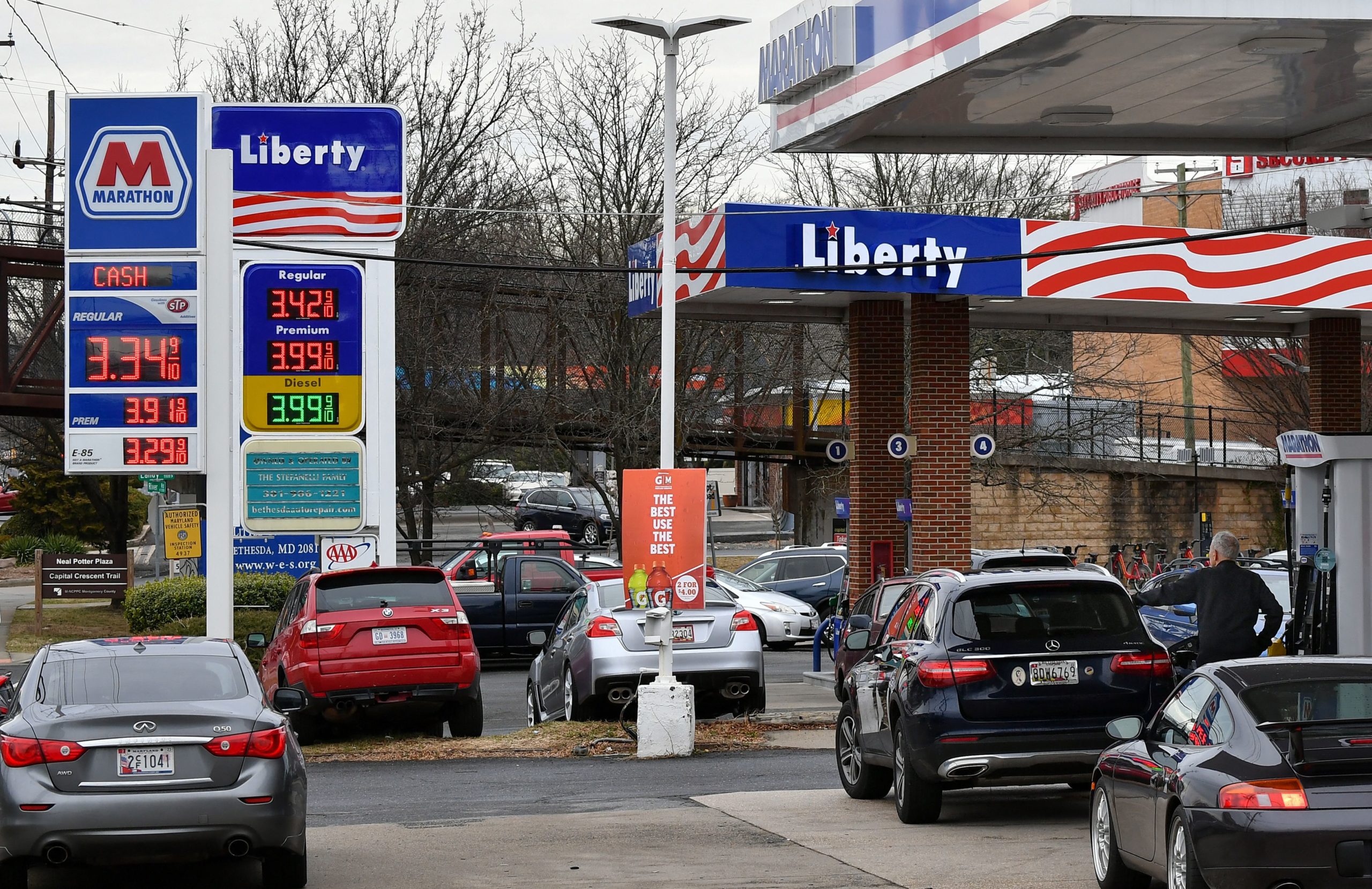 Gas stations are seen in Bethesda, Maryland on Wednesday. The average price of gas in the U.S. reached $3.53 per gallon this week, its highest level since July 2014. (Mandel Ngan/AFP via Getty Images)

Meanwhile, Europe has faced an energy crisis throughout the winter as wind power has underperformed and countries turned to natural gas imported from Russia. Russia provides Europe with almost 47% of its natural gas supply, the latest European Union data showed.

Russia, though, manipulated gas flows to Europe in recent months, causing massive price surges. On Tuesday, Germany halted the certification of  direct Russia-to-Germany natural gas pipeline Nord Stream 2, which was completed in September 2021 after the Biden administration stripped sanctions on the $11 billion project.

The American Gas Association (AGA), a group that represents U.S. energy utilities, said the Biden administration must heed the lessons from the European crisis. The current cost of natural gas in the U.S. is $4.38 per million British thermal units (mmBtu) compared to the roughly $40 per MMBtu Europeans are paying.

“But we cannot ignore the fact that there are areas of the country that have refused to build the necessary infrastructure to bring natural gas to customers that need it, resulting in reliance on shipments of liquified natural gas from abroad, the high prices and instability that go along with that,” she said.

Harbert noted that European consumers are facing significantly higher energy bills because leaders have “turned their backs on natural gas and the delivery infrastructure.”

On Jan. 25, as tensions increased along Ukraine’s borders, the White House announced it would help facilitate greater non-Russian natural gas flows into Europe. Such imports would come from North Africa, the Middle East, Asia and the U.S.