The Daily Caller spoke to David McIntosh, president of Club for Growth Action, an independent expenditure-only political action committee, about its 11-day bus tour to encourage turnout among conservative voters in the Jan. 5 Georgia runoffs.

Club For Growth Action wrapped up the 11-day bus tour, the first of two legs,  on Dec. 21. The group has also pledged $10 million and committed to knocking on 1 million doors in Georgia to ensure conservative voter turnout in an election that will determine which political party controls the Senate. McIntosh told the Caller about Club for Growth Action’s multifaceted messaging strategy in order to accomplish its mission that has been complicated by infighting among Republicans surrounding the results of the 2020 presidential election.

“The basic message to the folks here is we’ve got to get everybody on the Republican side to get out and vote. When we do, we will win, Georgia will win, and in the process we will save the country because the Senate is going to be the last bulwark against some of the most liberal ideas the Democrats hope for,” McIntosh told the Caller in a phone interview. (RELATED: Georgia Will Reject Democrats’ Socialist Agenda) 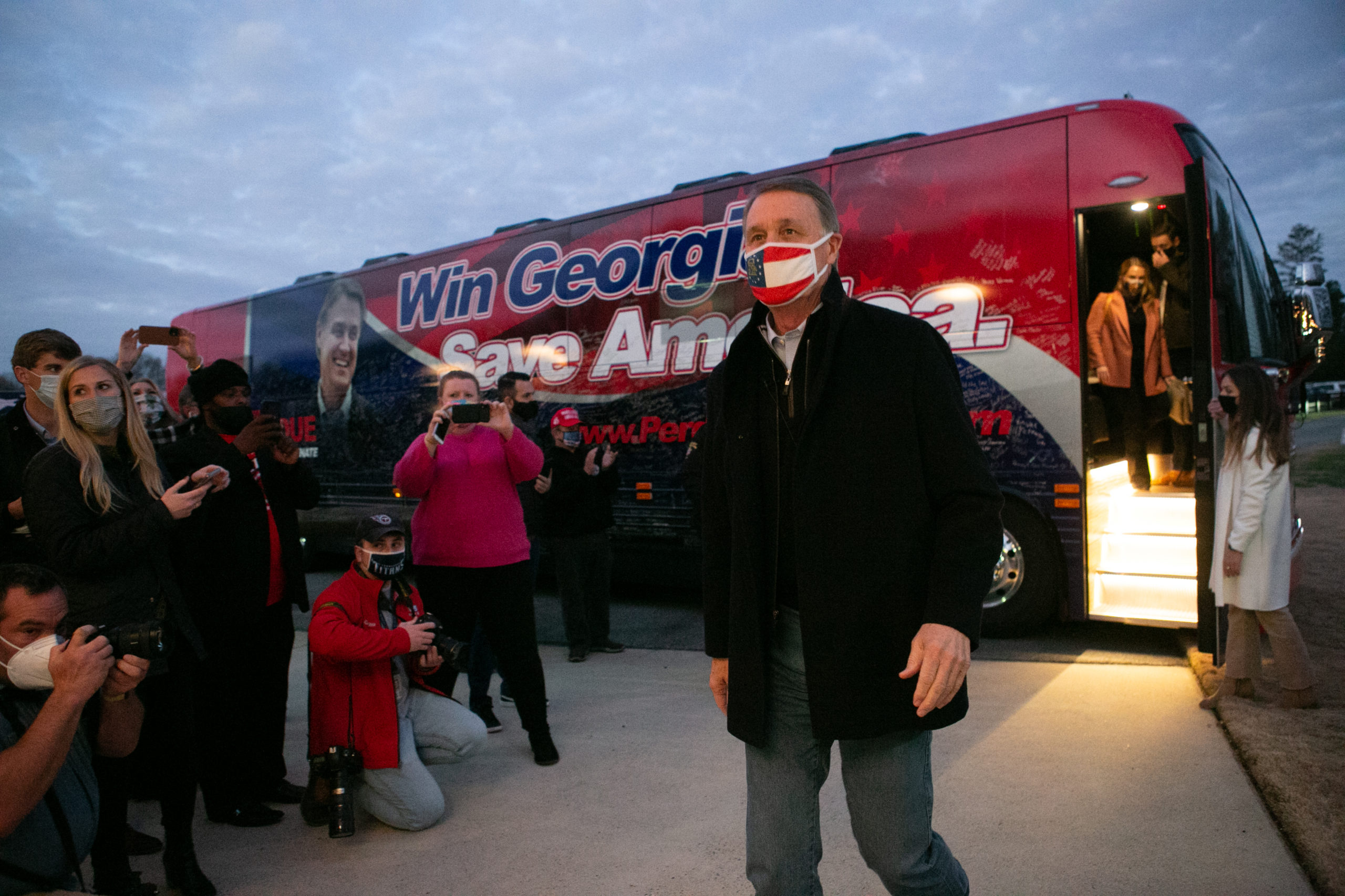 The group’s bus tour made 28 planned stops across the state of Georgia in 10 different designated market areas, according to Club for Growth Action’s website. It hit 22 of the top 30 Republican counties in the state.

Some Republicans have been discouraged by the results of the 2020 presidential election, especially in Georgia where President-elect Joe Biden bested President Donald Trump. Biden is the first Democrat to win Georgia in a presidential election since former President Bill Clinton in 1992. “To the folks in Georgia that are disappointed Trump lost, or feel the election was stolen because of fraud, our message to them is we need to go out and vote to vindicate Donald Trump,” McIntosh said of the messaging strategy to ardent Trump supporters. Trump supporters can, “show that in a fair election Republicans can win, will win, Georgia, and that it’s a red state,” according to McIntosh.

Club for Growth Action has been telling these Trump voters, “the only way they [Democrats] can steal another election is if you don’t vote,” McIntosh said.

Club for Growth Action is attempting to reenergize these voters, while convincing other Republican voters less enthusiastic about Trump to turnout as well. “For the folks around Atlanta and suburban Atlanta,” McIntosh said, “mostly the message to them is ‘look how radical the Democrat agenda is.’ Both Ossoff and Warnock will just fall right into line,” McIntosh said, “Ossoff and Warnock they [Democrats] expect will be people who just carry the water, and go right along with their radical agenda.”

Both groups of conservative voters should be motivated to vote for Georgia Republican Senators Kelly Loeffler and David Perdue because of “the $4.5 trillion dollar tax increases that Biden would bring in with his agenda,” the proposition of passing a Green New Deal, and higher amounts of regulation, according to McIntosh.

Over the course of the 11-day bus tour, McIntosh said the message was resonating among both camps of Republican voters. “There’s been this subtle shift in the sentiment among the Republicans we are talking to. They are getting more and more excited about this race, and realize how important it is, not only for Georgia, but for the whole country,” McIntosh claimed.

The 28 stops along the bus tour’s route included stops in Savannah, Augusta, Brunswick, Columbus and Athens.

Club for Growth Action was joined by the American Principles Project, Eagle Forum, Senate Conservatives Fund, Freedom Works for America, March for Life Action and Heritage Action for America, among other conservative groups.

On Saturday and Sunday appearances in Savannah, Forsyth County and Peachtree City, Cruz drew crowds of several hundred. Cruz has previously committed to backing some of the president’s election lawsuits if they reach the U.S. Supreme Court, but has also spoken out against pro-Trump figures that have suggested Trump supporters should boycott the Jan. 5 runoffs.

I don’t know who this clown is, but anyone saying America would be better off w/ Chuck Schumer as Majority Leader—producing huge tax increases, the Green New Deal, massive amnesty & a packed Supreme Court destroying the Bill of Rights—is trying to mislead the people of Georgia. https://t.co/jtEPT2UtzF

“The simplest solution for the Georgia runoff is to win the races by a big enough margin that they can’t steal the election,” Cruz told the Wall Street Journal in an interview.

Cruz has been vocal about what he believes is exactly on the ballot in the Georgia runoffs. “If Joe Biden is president, that means Chuck Schumer is majority leader, and if Chuck Schumer is majority leader, there will be zero constraints on the most radical left-wing ideas they’re pursuing,” Cruz said in a Nov. 12 interview on the Glenn Beck Program.

Republican Georgia Rep-Elect Marjorie Taylor Greene, who has previously been criticized for embracing various conspiracy theories and ties to Q-Anon, made several appearances on the Club for Growth Action bus tour. For Greene, the Georgia runoffs are not only to defend Trump’s legacy as president, “but to defend his 2020 election win that was stolen by Joe Biden and the Democrats,” Nick Dyer, Greene’s spokesman, told the Caller in an email. If Democratic challengers Jon Ossoff and Raphael Warnock are elected come January, “Democrats will pack the Supreme Court, add new states, eliminate the filibuster, confiscate our guns, legalize abortion up to birth and shove the job killing Green New Deal down our throats,” Dyer added. 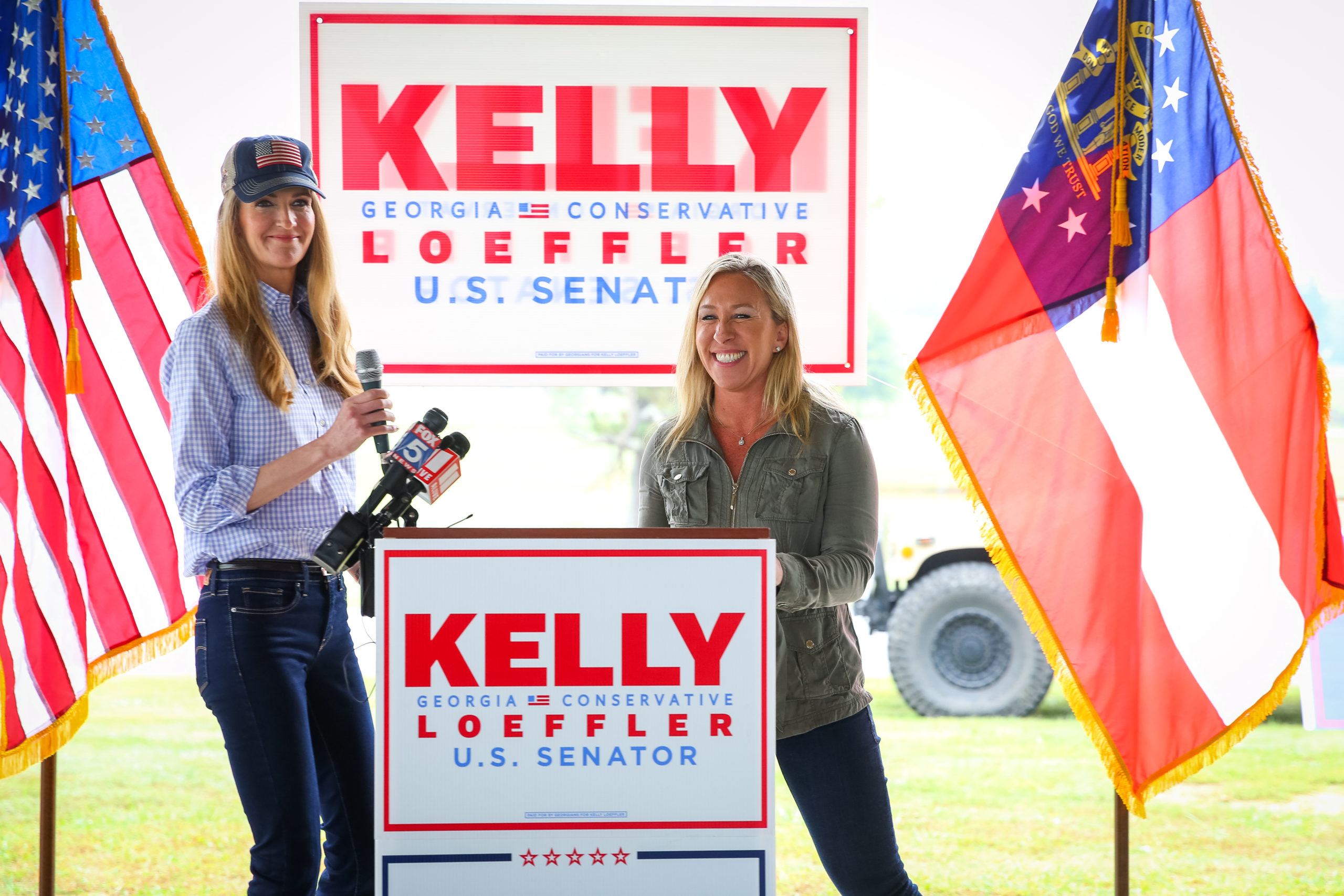 McIntosh agreed with Cruz and Greene’s assessment of the agenda Democrats will pursue if they take control of the Senate. “Warnock is a true radical,” McIntosh said, “I think that type of leadership would totally hurt Georgette in terms of their credibility and would be very dangerous in the United States Senate.”

“I think it helps that folks from all over the country are coming in and speaking on the bus tour, but that they’re also coming in and meeting them door-to-door,” McIntosh said about the conservative effort overall. “We’ve got thousands of people knocking on doors here in Georgia telling them just how important this election is and asking them to go out and vote to save our country.”

Karl Rove, Republican strategist and Fox News contributor, also argued that mail-in ballot data does not bode well for Democrats in a Dec. 15 interview with Fox News’ Martha MacCallum. “In November, 1,740,795 people requested a mail-in ballot. 1,362,369 — actually exercised it, voted by mail, so today, the requests are half a million less, a third less than they were for the November election, and what you also need to remember is 600,000 of the people on the list for mail-in ballots, 600,000 of that 1.7 million are automatically on the list. They are on the list for a long time. They sign up for permanent mail-in ballots, so they are counted as a request, but we don’t know whether or not they are actually going to vote,” Rove said. (RELATED: Stacey Abrams Thought She Discovered Something Great For Dems In Georgia. Then Karl Rove Found Out)

“They are less Democrat, they are less black, and 60% plus of them are 66 years or older, meaning more likely to be Republican voters,” Rove added.

However, that does not mean Democrats and progressive organizations are not pulling out all the stops to win the Jan. 5 runoffs. Biden’s victory in the November election should be a “wakeup call” for Republicans in the state, according to McIntosh.

“The biggest thing that has happened is the Democrats got organized, and have out organized Republicans” in Georgia, McIntosh said, crediting the rise of former Democratic gubernatorial candidate Stacey Abrams for the shift.

Really American PAC, a progressive group, has been putting up billboards across the state that read, “Perdue/Loeffler Didn’t Deliver For Trump, Don’t Deliver For Them,” in order to suppress Trump-supporter turnout. (RELATED: Here’s How Democrats Think They’re Going To Win The Georgia Runoffs)

“That shows they know their message can’t win, and so they’re trying to be deceptive to fool people,” McIntosh said in reaction to hearing about Really American PAC’s billboard campaign. “I don’t think Georgia will be fooled. They’re pretty savvy voters,” McIntosh added.

“If Georgia turns blue, Republicans are in big trouble,” McIntosh said of the long-term ramifications of the Jan. 5 election, “the Democrat mantra is if you have power, use it, and if you lose it, regroup for the next election.”